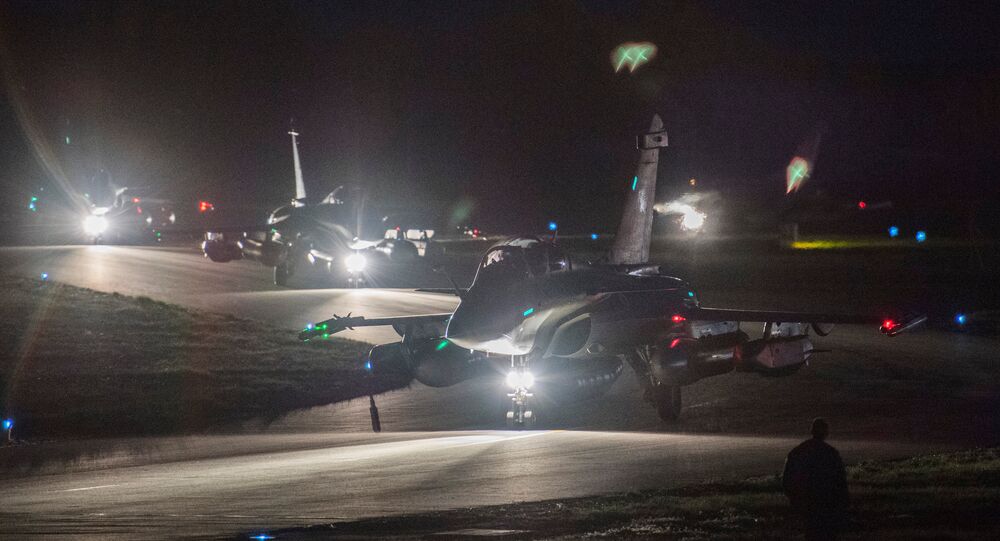 On Friday, US President Donald Trump ordered to "launch precision strikes on Syria" in response to the alleged chemical weapons attack in Douma, described by Moscow and Damascus as a false flag. The attack was joined by British and French air forces.

More than 100 cruise and air-to-surface missiles were launched at "civilian and military facilities" in Syria on April 14 in line with US President Donald Trump's order.

The US warships Porter, Cook и Higgins carried out the attack from the Red Sea, while the French and UK fighters Mirage and Tornado, respectively, interacted with the US bombers B-1 over the Mediterranean Sea.

Military sources have told Sputnik Arabic that the strikes on Syria had been conducted from a French base in the United Arab Emirates, British bases in Jordan and Cyprus, as well as the US' Incirlik Airbase in Turkey. The attacks were launched on research centers in the administrative area of Barzeh and the village of Jamraya in the capital [Damascus] suburbs as well as the Jebel el Mania district west of Damascus. According to the source, the strikes on the western part of the Homs province have been fully repelled and that the missiles had not caused any damage.

According to the Russian Defense Ministry, the Syrian defense forces managed to intercept 71 cruise missile out of 103, including all that had been fired at Dumayr military airport located 40 kilometers (24 miles) north-east of Damascus.

First #US airstrikes on #Syria #Damascus and #Aleppo tonight have been implemented after President Trump ordered War on #Syria. pic.twitter.com/0ASErhojK8

The ministry explained that Syria repelled the Western attack by air defense complexes made in the USSR over 30 years ago, including the S-125 and S-200 air defense systems, as well as Buk and Kvadrat.

However, the Russian military announced its decision to reconsider supplies of S-300 missile systems suspended due to some Western states\ request after the attack.

Respect the @UN Universal Declaration of Human Rights, you cannot just launch airstrikes on Syria and watching bombs fall as if you're watching a fireworks display.

The ministry underscored that "none of cruise missiles launched by the US and its allies did not enter the zone of responsibility of the Russian air defenses, covering objects in Tartus [naval facility] and Hmeymim [airbase located in the Latakia province].

The Syrian military, in turn, said that the country's air defenses had downed the majority of US, UK and French missiles, with some of them causing material damage.

Syrian President Bashar Assad slammed the attack, saying that Damascus' resolve to "fight and crush terrorism in every inch" would only increase after the strikes.

The Syrian Foreign Ministry has denounced the joint US, British and French strikes as a "brutal, barbaric aggression," saying that the attack "aims at hindering the OPCW [Organization for the Prohibition of Chemical Weapons] mission's work and preempting its results."

© AFP 2021 / JACK GUEZ
Israel Closes Airspace Over Disputed Golan Heights Amid Syria Strikes – Reports
The ministry stressed that "this aggression will only lead to inflaming tensions in the world and threatens international security."

It was echoed by the Syrian General Staff, which said that the army would continue to fight against terrorism despite the trilateral aggression and that such attacks would only strengthen the government forces' resolve.

Commenting on the move, Pentagon chief James Mattis described US airstrikes on Syria as a "onetime shot," while Joint Chiefs of Staff Chairman Gen. Joseph Dunford told reporters that Washington had no more attacks planned at the moment.

At the same time, Dunford said he was not aware "of any Russian activity," when asked whether any Russian defenses engaged US, French or British ships or missiles missiles.

UK Prime Minister Theresa May, in turn, said that she has authorized British armed forces to conduct coordinated and targeted strikes to "degrade the Syrian regime's chemical weapons capability and deter their use," remarks that were supported by British Foreign Secretary Boris Johnson.

For his part, French President Emmanuel Macron said that he has ordered his country's military to intervene in Syria together with the US and UK, and that the strikes on Syria target "regime chemical weapons capacity."

The Kremlin has issued a statement on behalf of Russian President Vladimir Putin, who called the strikes an "act of aggression against a sovereign state that has been fighting against terrorism."

At the same time, the Russian Foreign Ministry spokeswoman Maria Zakharova has condemned the airstrikes which she said "have been launched at the capital of a sovereign state that has been fighting for survival for years amid terrorist aggression."

She went on to note that the strikes have delivered a serious blow to the Syrian peace negotiation process.

According to the Russian General Staff, it views the strike not as a response to an alleged chemical attack, "but a reaction to the success of the Syrian armed forces in the liberation of its territory from international terrorism." It has emphasized that the attack had been carried out exactly on the day, when the OPCW special mission was set to start its work in Damascus to probe the incident in the city of Douma, where chemical weapons had allegedly been used.

The Russian Embassy in Damascus told Sputnik that it has no reports of Russian nationals killed or wounded in Saturday's strikes launched by the US, the UK and France against Syria.

The Iranian Foreign Ministry has lashed out at the Western states that had conducted a joint massive missile strike on targets in Syria and warned them of "regional consequences," while the Islamic Repiblic's Supreme leader Ali Khamenei called the US, French and UK leaders "criminals."

Another state-guarantor of the Syrian ceasefire, Turkey, has stated that its Incirlik airbase, which also hosts US nukes, hadn't been used in the Western attack, though has supported its NATO allies' move.

Iraq, which has long suffered from Daesh* terrorists' occupation alongside Syria, stated that the Western attack on Syrian military targets could give terrorism an opportunity to expand in the region.

"Such action could have dangerous consequences, threatening the security and stability of the region and giving terrorism another opportunity to expand after it was ousted from Iraq and forced into Syria to retreat to a large extent," the Iraqi Foreign Ministry said.

The Lebanese Foreign Ministry has slammed the strikes, calling them an "outrageous aggression" against soverrign state.

Reuters cited an Israeli official as saying on condition of anonymity that missile strikes at Syria are "justified" and that Syria's alleged "murderous actions" jeopardize the country's territory, forces and leadership.

The Saudi Foreign Ministry said on Saturday Riyadh expresses "full support to the military operations carried out by the United States, the United Kingdom, and France on military targets in Syria."

The announcement of the airstrikes came just hours before the Organization for the Prohibition of Chemical Weapons (OPCW) team was scheduled to arrive in Douma to determine whether chemical weapons had been used there.

The situation in Syria significantly escalated last week amid reports about the April 7 alleged chemical attack in the city of Duma located in the Damascus suburb of Eastern Ghouta.

The EU and the US have rushed to blame the forces of Syrian President Bashar Assad, with Damascus refuting the allegations. Moscow has called for a thorough investigation into the alleged attack before drawing any conclusions.

Speaking at the briefing on Friday, Russian Defense Ministry spokesman Igor Konashenkov said that the ministry "has plenty of evidence that on April 7, a planned provocation was carried out in Douma to mislead the international community and prod the United States to launch missile strikes on Syria." According to him, the provocation was organized by Syrian NGOs, including the infamous White Helmets.

Konashenkov said that the Russian Defense Ministry has also evidence of the UK's direct involvement in organizing this provocation. He also said that the ministry found those who took part in filming the mock-up chemical weapons attack in Douma and that those participants briefed the ministry on details of filming the clip.