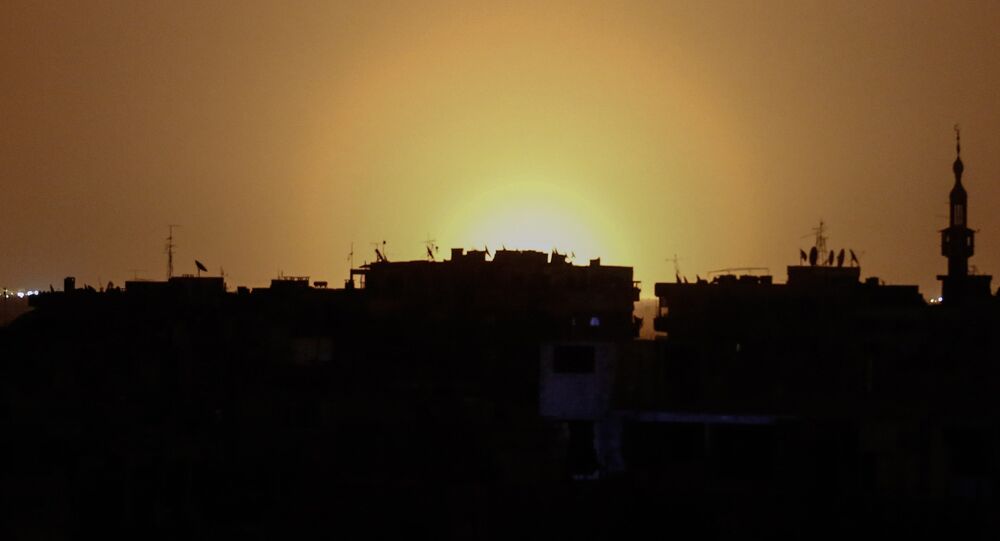 An apparent false flag chemical attack in the Syrian town of Douma on April 7 has served as a pretext for the United States to threaten the Middle Eastern country with a missile strike; Russia has been calling for a transparent investigation while local doctors have said no one has requested any medical treatments for poisoning.

The Russian Defense Ministry held a press briefing on what the Western narrative describes as an alleged chemical attack in Syria's Eastern Ghouta. No evidence has been presented to support the claim. A Russian chemical corps commission that has been sent to Douma reported that no traces of chemical poisoning were found. On April 12, the US defense secretary acknowledged that the Pentagon had no evidence of chlorine or sarin use in Douma.

Speaking at the briefing, Russian Defense Ministry spokesman Igor Konashenkov said that the ministry has enough evidence that the planned provocation with the use of chemical weapons was carried out in Syria's Douma on April 7.

He added that   the United States and Western countries continue their "indiscriminate and unfounded accusations" against the legitimate Syrian government over the alleged use of chemical weapons against civilians in Eastern Ghouta.

However almost a week on, the United States and some European countries have failed to provide any evidence, according to him.

"The Russian Defense Ministry has plenty of evidence that on April 7, a planned provocation was carried out in Douma with the aim of misleading the world community. The provocation's real purpose today is clear to everyone — to prod the United States to launch missile strikes against Syria," Konashenkov stressed.

READ MORE: US Strikes on Syria Would Be a Violation of UN Charter – Analyst

Konashenkov said that direct participants of the process to film a video clip about the "consequences of a chemical attack" in Syria's Duma said the video was staged.

"We managed to find direct participants in the shooting of this video and interview them. Today we are presenting a live interview of these people. Duma residents in detail told us how the filming was conducted, in what episodes they took part themselves and what they did," Konashenkov said.

The Russian military could see that these were the very people from the video. According to Konashenkov, these were two medics working in a local hospital in the emergency department. They said that people in the hospital had no signs of poisoning with toxic agents.

"During the provision of first aid, unknown people ran into the hospital, some of them with video cameras, who started screaming, panicking and pouring everyone with water from hoses, shouting that everyone was poisoned with toxic agents. Patients… and their relatives in panic began to pour water on each other," the ministry spokesman said.

He said that after the filming, the unknown people disappeared fast.

He added that between April 3 and April 6, London put pressure on representatives of the so-called White Helmets group in order to facilitate the implementation of the provocation.

Separately, he said that the Russian Reconciliation Center along with Syrian authorities  are wrapping up a large-scale humanitarian operation in the Damascus suburb of Eastern Ghouta.

All the settlements of Eastern Ghouta are currently under control of Syria's government forces. The Russian military police were deployed to the area to monitor the situation and maintain law, according to him.

"With the situation in this Damascus suburb showing signs of stabilization, civilians return to their homes. To date, their number stands at about 63,000. In other words, more than half of those residents who were earlier evacuated have returned home," Konashenkov stressed.

The situation in Syria significantly escalated over the last week because of an alleged chemical attack in the city of Duma. Reports about the alleged attack in Duma, located in the Damascus suburb of Eastern Ghouta, emerged last Saturday.

The European Union and the United States have rushed to blame the forces of Syrian President Bashar Assad for the incident, however Damascus has refuted the allegations. Moscow has called for a thorough investigation into the alleged attack before drawing any conclusions.

Referring to an analysis of Douma soil, which was taken shortly after the alleged chemical weapons attack, the Russian Defense Ministry for its part said that the analysis indicated the absence of nerve agents and chlorine-containing poisonous substances in the area.

On Wednesday, US President Donald Trump said that Russia, which supports Assad, should "get ready," since "nice" and "smart" missiles were due to strike Syria. Shortly after, Trump backpedaled the announcement by tweeting that the attack on Syria "could be very soon or not so soon at all" and that he has "never said when an attack on Syria would take place."

For her part, White House spokeswoman Sarah Huckabee Sanders said that the US President has yet to make a final decision on the use of force against Syria as he is currently considering the intelligence information.