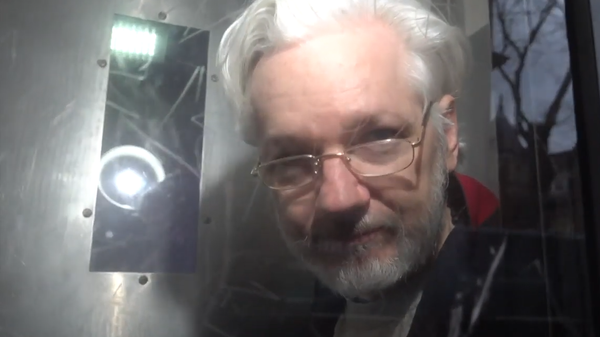 Mohamed Elmaazi
All materialsWrite to the author
The Lancet medical journal has published a second letter drafted by physicians from around the world demanding an end to the ongoing mistreatment of WikiLeaks publisher and founder Julian Assange.

Two hundred and sixteen medical professionals signed an article published in The Lancet medical journal demanding an end to the "ongoing torture and medical neglect" of award-wining WikiLeaks publisher Julian Assange, who remains incarcerated in Britain's Belmarsh maximum-security prison. Clinical psychologist Dr Lissa Johnson, who co-authored the letter, explained to Sputnik why she and her colleagues felt it necessary to draft this latest version despite having already published a letter in February.

Sputnik: Why did you co-author this letter in The Lancet demanding an “end to the torture and medical neglect of Julian Assange”?

Dr Lissa Johnson: We wrote this letter because it is now over a year since the UN Rapporteur on torture, Nils Melzer, reported that Julian Assange is suffering all symptoms typical of prolonged exposure to psychological torture. Although professor Melzer attributed that torture to "collective persecution" by the US, the UK, Sweden and Ecuador, all governments involved have failed to investigate Professor Melzer’s findings, or bring Julian Assange's torture to an end. So we - an international group of doctors and some psychologists - began writing to governments late last year, and then in The Lancet in February this year, underlining the medical seriousness of Nils’ Melzer’s reports. We stressed that psychological torture is a medical issue and a life-threatening condition, reinforcing the warning that Julian Assange’s inhumane treatment may soon end up costing his life.

However, not only has no government authority responsible for Julian Assange’s welfare acted to end his torture and medical neglect, that torture has only intensified since our February letter. We therefore reiterated our calls in The Lancet ahead of International Day in Support of Victims of Torture, detailing the ways in which Julian Assange's torture has escalated since February, pointing out that government officials are legally obligated to cease his torture.

Given that media reporting of Julian Assange’s case has been sorely lacking, we also sought to fill in the blanks regarding the nature of his mistreatment.

Sputnik: How has Julian Assange's torture intensified since your last Lancet letter?

Dr Lissa Johnson: Throughout his extradition proceedings and court hearings Julian Assange has been prevented from engaging in his own defence. This is an extremely serious matter, as he is fighting 175 years in US supermax prisons.

Importantly, Julian Assange is fighting controversial and unprecedented Espionage Act charges which cast journalism as espionage, effectively placing him on trial for publishing activity. Yet he is being treated like a violent criminal, and subjected to degrading and dehumanising treatment as a result. That treatment has included unnecessary strip-searches, handcuffing, confiscation of privileged legal documents, and keeping him in a bullet-proof glass enclosure where he is unable to hear or participate in his own trial, or communicate with his lawyers. These extreme measures are being imposed despite the fact that Julian Assange is unsentenced, charged with nothing under UK law, and is arbitrarily detained in Belmarsh prison according to the UN Working Group on Arbitrary Detention.

We explain in The Lancet that we are not the only group to protest these abuses. After the first phase of his extradition proceedings, the International Bar Association Human Rights Institute (IBAHRI) described Julian Assange's treatment during the proceedings as “shocking and excessive”, likening it to the Abu Ghraib prison scandal.

In addition to abuse of his fair trial rights and his inhumane treatment in court, we pointed out that, medically, denial of Julian Assange's emergency bail application in March has placed his life at even greater risk than it was previously. Not only has this placed Julian Assange in harm’s way from a deadly virus, he is kept in isolation for at least 23 hours a day under coronavirus lockdown measures, and is therefore entirely unable to meet with his lawyers to prepare for the second phase of his extradition hearing. All of this intensifies his psychological torture, by intensifying solitary confinement, helplessness and defencelessness in the face of threat.

Sputnik: What is the basis of your claims that Mr Assange is being mistreated to such an extent that the law is being violated?

Dr Lissa Johnson: Under the Convention Against Torture, which the UK has ratified, those acting in official capacities can be held complicit and accountable not only for perpetration of torture, but for their silent acquiescence and consent. In the UK, such complicity is prohibited not only under the Convention Against Torture but also under Article 3 of the European Convention on Human Rights and section 134 of the Criminal Justice Act 1988, whereby it is an offence for any public official to “intentionally inflict severe pain or suffering on another in the performance or purported performance of his official duties”. Although we didn’t mention it in The Lancet letter, states also have a duty to investigate findings of torture such as those of the UN Rapporteur on torture, Nils Melzer. That duty is being abrogated here.

While we are not lawyers, in our professional capacities we are routinely expected to recognise and report unlawful behaviour that places people, including third parties, at risk. We are upholding that obligation here, and reporting the torture of Julian Assange to the public whose rights and freedoms his torture endangers.

Sputnik: You write that “Isolation and under-stimulation are key psychological torture tactics, capable of inducing severe despair, disorientation, destabilisation, and disintegration of crucial mental functions”. Can you explain why this would be the case?

Dr Lissa Johnson: As we detailed in a letter to the Australian government last year, meaningful human interaction and mental stimulation are minimum necessary requirements for human psychological and mental functioning, much as food and water are minimum necessary requirements for human physical functioning. Depriving people of social contact and simulation, particularly while exposing them to danger such as US extradition or a deadly disease, is the psychological equivalent of inflicting relentless physical starvation and assault.

Solitary confinement, for instance, does not simply cause loneliness, boredom and malaise. It reduces neuronal activity in the brain, which can lead to severe and long-lasting brain changes, including impairment in basic abilities to reason, think, remember and speak. It also causes severe psychological suffering and trauma, which can become unbearable, and often results in self-harm, suicidality and a breakdown in psychological functioning. Chelsea Manning has said of her time in solitary confinement, “I was alive but I was dead.

Sputnik: How do you respond to critics who might say that doctors should remain apolitical and not get involved in matters such as Julian Assange’s extradition case?

Dr Lissa Johnson: In Julian Assange’s extradition case, silence and acquiescence are the political stance. The Convention Against Torture carries what are known as positive obligations, or obligations to ‘do something’ to prevent torture and ill-treatment. Flouting that obligation by doing nothing in the face of a UN official’s warnings is the politically-motivated course of action. It serves to protect a politically-motivated persecution, in which a publisher is being tortured for journalism.

In terms of the complicity of silence, my own area of expertise involves the psychology of atrocity and human rights abuse. The reality is that silence is the social bedrock of atrocity. It is ‘Human Rights 101' that human rights will only be upheld if citizens demand it of their governments.

As a result, in a democracy, it is the responsibility of citizens to hold their governments accountable for violations of rights. The psychology of power is such that power will be abused, and abuses of power will escalate, if citizens remain silent in the face of those abuses. Julian Assange’s case is therefore not only a litmus test-case for press freedom, but for fundamental human rights, including the right to be free from torture. To avoid taking a stance in this situation is, by default, to take a stand on the wrong side of torture. It is not an issue of politics. It is an issue of universal human rights.

Sputnik: What are you calling for now?

Dr Lissa Johnson: We are reiterating our demand for an end to the torture and medical neglect of Julian Assange, and joining the world’s leading authorities on human rights and international law calling for his immediate release from prison and an end to the extradition proceedings against him. As we pointed out in The Lancet, press freedom and human rights organisations, from Reporters Without Borders to Human Rights Watch to the Council of Europe, are condemning the Espionage Act charges against Julian Assange and the US extradition request, with all that it entails.