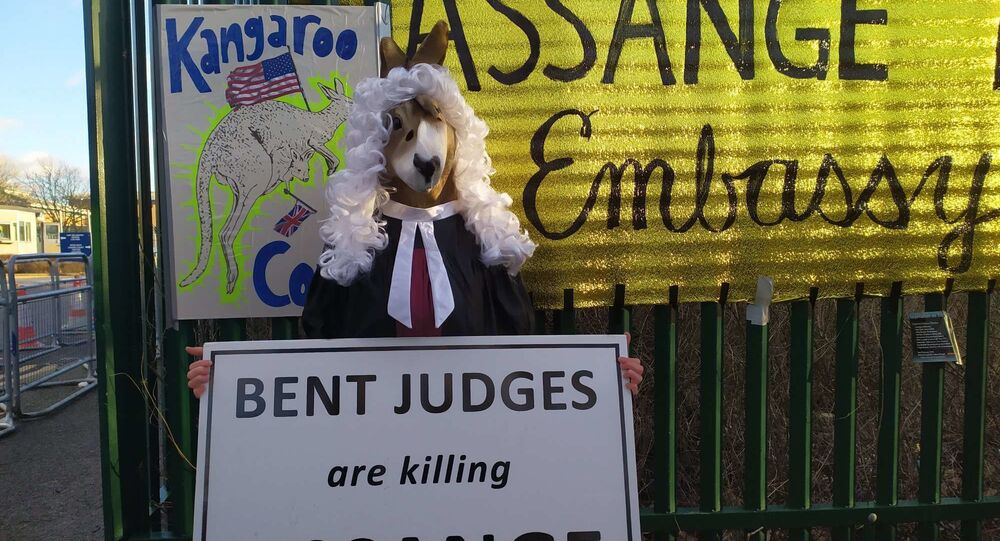 On 27 February the judge in Julian Assange’s extradition hearing denied an application for him to leave the dock and sit with his lawyers for the second part of his hearings due to be held in May. District Judge Vanessa Baraitser heard one hour of legal arguments from Mark Summers QC, who acts for the defence, before reading out from a prewritten judgement on the application, presumably based on the written submissions which Summers filed with the court earlier.

The day before Assange's defence lawyers argued that he should be allowed to sit with his lawyers so that he can properly participate in his own defence. James Lewis QC, acting for the US government, actually agreed with the suggestion. “This is your court madam, you can do with it as you see fit”, Lewis told Baraitser. A position that the judge did not agree with at the time.

Baraitser explained that while she was not necessarily opposed to Assange leaving the dock and sitting with his lawyers, she did not think it was within her jurisdiction for her to grant such a request, nor did she believe it would be possible without Assange’s custody technically being broken. She also argued that it was for the security personnel, namely private security firm SERCO which oversee prisoner security in the court, who must conduct a “risk assessment”.

Julian Assange Complains That He Can't Participate Properly in His Proceedings

Assange had repeatedly complained to the court, both directly and via his lawyers, that he was unable to properly follow proceedings and that he was unable to regularly consult with his lawyers. The court was told that a combination of his psychiatric state (the UN torture expert, and two other medical specialists, determined that the award-winning editor and journalist showed symptoms of being psychologically tortured), the side effects of his medication, and the unsuitability of the headphones given to him, all meant that he could not properly aid in his own defence.

Julian Assange to Court, in rough account: ‘I am as much a participant in these proceedings as I am watching Wimbledon. I cannot meaningfully communicate with my lawyers. There are unnamed embassy officials in this court room. THREAD.

​Summers also told the court that it was next to impossible for Assange to speak to his legal team without the prosecution, or the private security personnel, overhearing the conversations.

​Baraitser suggested that court could always be adjourned and Assange could speak to his lawyers in the cells under the courthouse, something which had been done in the past. This would mean adjourning the court “once every three minutes for twenty minutes”, Summers responded.

When the judge suggested that that was an “exaggeration”, Summers replied by asking Baraitser whether she had ever been to the cells, to which she replied that she had not.

The current set-up would be entirely impractical, as well as unfair to Assange, Summers argued, when in May, for at least three weeks, potentially dozens of witness will be giving live evidence in court.

“One can be in custody if they are wondering around the concourse.. enjoying the delights of the canteen or prison grounds”, Summers said to the judge.

The court was also told that the headphones provided to Assange give off a strong white noise which he found very distracting and that he can still only hear when speakers speak directly into the microphone. The latter of which is also true for the press based in the annex and observers based in the public gallery.

Former Ministry of Defence whistleblower Clive Ponting, who revealed that the British military sank an Argentinian ship as it was sailing away during the Falklands war, informed former British diplomat Craig Murray that:

"On day one of the trial the judge allowed [Ponting] to be released from the dock and sit with his lawyers on the grounds that even though it was a national security case he was no threat."

Murray, himself a whistleblower, relayed the information to the defence team before they presented their arguments to the court.

Ultimately, the judge was convinced by Summers that:

1)      it is within her jurisdiction to permit Assange to sit with his legal team;

2)      this has been done with vulnerable defendants in the past;

3)      the European Court of Human Rights has ruled that a similar “glass cage” used in a Moscow-based trial violated the defendant’s rights to a fair trial; and

4)      custody would not be broken by Assange leaving the dock.

Judge Rejects Application For Assange To Sit With His Defence Team

But after listening to Summers' arguments for about an hour, Baraitser nonetheless ruled against the application. Reading from a prepared statement, the judge explained that she felt there were ‘more proportionate’  means by which Assange could participate in his defence without leaving the dock. These include him standing up and getting the attention of his lawyers, and court being adjourned so that he can go into the cells below with his legal team. She also noted that he was provided with headphones which she understands are suitable for his needs (despite Assange saying that they were not).

“On request of your lawyers I am happy to start proceedings later than usual. Every hour, if need be, I am happy for your lawyers to speak to you  below the court and take instructions… If that means proceedings will extend beyond three weeks [in May] for a much longer period, I am very much happy to do that”, Baraitser said when deciding against the application.

“In my view there are sensible, appropriate, measures that can and, If necessary, will be taken… [other than permitting you to leave the dock]. I will keep these in review”, Baraitser added.

Observers Question Whether Assange Is Receiving a "Fair Hearing"

​At the final press conference Rebecca Vincent, of Reporters Without Borders, Jennifer Robinson, one of Assange’s barristers, along with WikiLeaks’s Editor-in-Chief, Kristinn Hrafnsson, all expressed their frustration, disappointment, and outrage regarding the judge’s decision.

@Rebecca_Vincent, @KHrafnsson, @SuiGenerisJen summarise their final observations of #Assange's condition, his (in)ability to participate in his own defence, Judge Baraitser refusing his application to sit with his lawyers & the arguments submitted by the defence during the week. pic.twitter.com/rAGj76TvZA

There will be two administrative hearings on 25 March and 7 April, where Assange will appear via video link in Westminster Magistrate’s Court and in person at Belmarsh Magistrates’ Court respectively. Assange’s substantive extradition hearings will restart in May, during which time dozens of witness are expected to be called. The WikiLeaks founder faces up to 175 years in prison. He is charged with 18 counts of espionage related offences for his role in publishing classified US-documents revealing war crimes and other criminality.