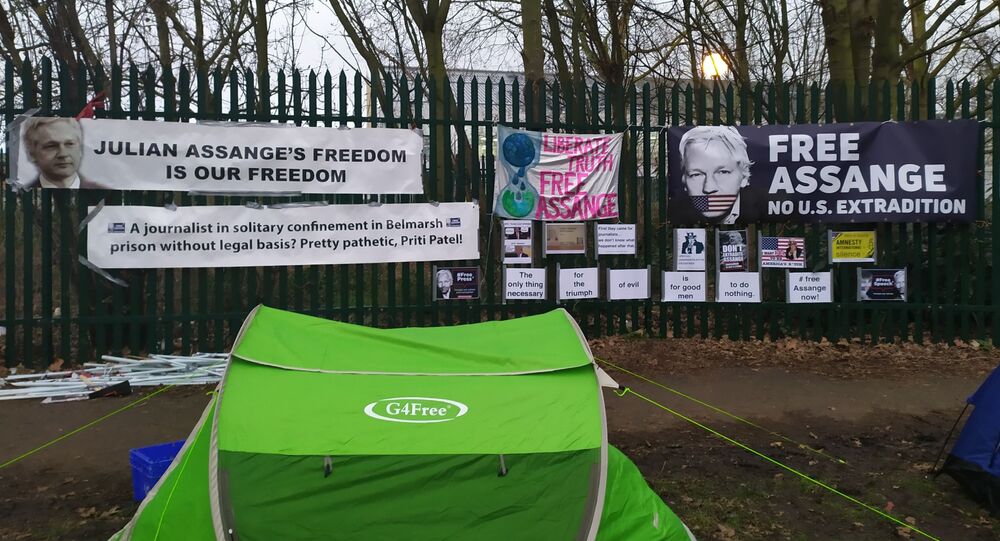 Barry Pollack, Julian Assange's US-based lawyer, branded as "Orwellian" and "frivolous" claims by prosecutors that while the US government can seek the WikiLeaks founder's extradition under the Anglo-US Treaty, the publisher can't rely on any protection contained within the very same treaty.

The US government told Belmarsh Magistrates' Court on 26 February that it doesn't matter whether Assange is wanted for alleged political offences in the US, because they argued the UK-US Extradition Treaty has not been incorporated into English law.

Lewis also cited a litany of English case law to establish that whenever there have been conflicts between international law and English law, English law takes precedence every time.

Article 4(1) of the UK-US Extradition Treaty 2003 states that, "extradition shall not be granted if the offence for which extradition is requested is a political offence".

@JohnWRees summarises the proceedings and legal arguments put to Belmarsh Magistrates' Court on 26 February as to whether defendants have any rights under the Anglo-US extradition treaty. @SwaziJAF speaks to #Assange's condition in court. pic.twitter.com/lXrRGfg3Wx

​​Lewis argued that even if the court decides that the Treaty does not contradict UK law, but rather works with it and so Article 4(1) is available to the defence to rely on, the charges that Assange faces are not "purely political" so it wouldn't matter anyway.

​Edward Fitzgerald QC, acting for Assange, pointed out that the Extradition Act 2003 neither supports nor opposes "political offences" as a bar to extradition. He argued that because the 2003 Act does not explicitly contradict Article 4(1) of the UK-US Extradition Treaty there is no "conflict" between international law and English law and therefore Assange is perfectly entitled to avail himself of the protections under Article 4(1) which prevents extradition for political offences.

"The political offence exemption was taken out of the 2003 Act, because the 2003 Act was a direct response to [the attacks of 11 September 2001]", Craig Murray said. The former British diplomat, who has been attending Assange's hearings, worked in the Foreign and Commonwealth Office when the 2003 Act was debated and passed.

"America revisited its extradition agreements with a lot of countries because it didn't want al-Qaeda people to be able to claim [they were wanted for a] political act and not get extradited to the US. So that was the background to it", he explained.

The diplomat, who blew the whistle on British complicity in torture in 2004, pointed out that then-MP George Galloway was "personally assured by the Home Secretary that [the political offences exception] was only being removed so that people like [al-Qaeda leader] Osama bin Laden could be extradited. And that it would not apply to political dissidents".

Murray argued that the US government is going too far because the UK-US Treaty "is the instrument under which you are extraditing [Assange], if there were no treaty you could not extradite on the basis of the [2003] Act alone, you need the treaty to be able to extradite". He added the idea that the entirety of the UK-US Extradition Treaty applies to Assange except for Article 4 "makes no sense whatsoever", an argument the publisher's defence team also made in court.

Murray stressed that as someone who has personally negotiated treaties on behalf of the UK in the past, and seen them turned into law, "when you negotiate a new treaty, not every new treaty requires a new law to make them into force". Existing law may already be sufficient to give force to the treaty. The British government will have made an assessment. At the time, the 2003 Act was sufficient to give legal effect to the entirety of the UK-US Treaty which was ratified in 2007, otherwise they would not have ratified it, Craig said.

"The US-UK Extradition Treaty says very clearly that where the offence is a political offence there is a complete bar to extradition. Despite that, today, the government argued that the court should ignore the treaty altogether and extradite Julian Assange anyway. It is really an outrageous position, an Orwellian position, for the government to take here and it is certainly my hope that the judge will not accept such a frivolous argument", Pollack said.

#JulianAssange's US attorney, Barry J Pollack, has been sitting in on the extradition hearings. He describes the US's government's position, of relying on an extradition treaty while denying that any rights accrue to #Assange from that treaty, as "Orwellian" and "frivolous". pic.twitter.com/8UXU5wFzHv

​The US government is expected to continue to present its arguments on 27 February as to why it believes the only relevant law is the 2003 Extradition Act, which, they say, offers no exemptions to extradition for political offences.