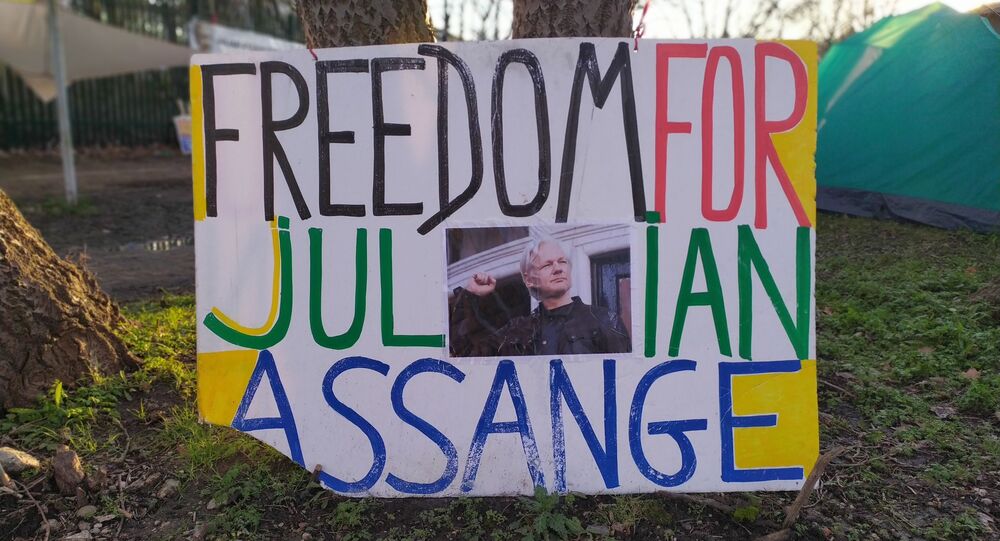 The judge overseeing Julian Assange's extradition hearing has refused to intervene to improve his prison conditions despite his lawyers reporting mistreatment at the hands of prison officials. She has also denied Assange's request to sit with his lawyers despite his complaint that he can neither follow proceedings nor direct his legal defence.

The treatment of Julian Assange by UK prison officials and the British judicial system has been condemned by the International Bar Association's Human Rights Institute (IBAHRI), which was set up soon after WWII and describes itself as the, "the global voice of the legal profession... the foremost organisation for international legal practitioners, bar associations and law societies".

In a statement released on 10 March 2020, the IBAHRI notes that in a single day Belmarsh prison officials handcuffed the award-winning journalist eleven times, placed him into five different cells, strip searched him twice and confiscated his confidential legal papers.

The IBAHRI condemns the reported mistreatment of Julian #Assange during his US extradition trial in February 2020, and urges the UK government to take action to protect him. Read more: https://t.co/g8WXK5uQjT pic.twitter.com/U5LbI5U9ge

"The IBAHRI is concerned that the mistreatment of Julian Assange constitutes breaches of his right to a fair trial and protections enshrined in the United Nations Convention against Torture and Other Cruel, Inhuman or Degrading Treatment or Punishment, to which the UK is party", IBAHRI Co-Chair Michael Kirby, said.

Kirby, an Australian-based jurist and former High Court judge, called it "deeply shocking" that the UK Government has remained silent and "has taken no action to terminate such gross and disproportionate conduct by Crown officials".

He also expressed his surprise that the judge overseeing Assange's extradition case at Belmarsh Magistrate's Court (sitting at Woolwich Crown Court), District Judge Vanessa Baraitser, has, "reportedly said and done nothing to rebuke the officials and their superiors for such conduct in the case of an accused whose offence is not one of personal violence".

.@IBAHRI condemns as “deeply shocking” the “gross and disproportionate” treatment of Julian #Assange by UK authorities in US extradition trial. Strong statements of concern from Co-Chairs Michael Kirby and @anneramberg https://t.co/PCYUIytstu pic.twitter.com/qgJXyuWTvg

​The IBAHRI's other Co-Chair, Dr Anne Ramberg who is also the General Secretary of the Swedish Bar Association, blasted what she described as "the serious undermining of due process and the rule of law". She described as "troubling" the fact that the WikiLeaks founder has complained that he can neither properly hear nor follow what is happening in his own case and, "because he is locked in a glass cage is prevented from communicating freely with his lawyers during the proceedings".

During the first week of Assange's substantive extradition hearings held in February 2020 Judge Baraitser accepted that she had the legal authority to permit the editor to sit with his legal team during proceedings, but ultimately decided against doing so.

The IBAHRI made explicit mention of the findings of UN torture expert Nils Melzer, and two other medical specialists in examining torture victims, that Assange showed the symptoms of being psychologically tortured.

"If Mr Assange was viewed as a victim of psychological torture, his extradition would be illegal under international human rights law", the IBAHRI statement concludes.

This is the latest intervention into the extradition proceedings and treatment of Assange by an major legal organisation with a human rights bent, since the Council of Europe's Commissioner for Human Rights explicitly came out against Assange's extradition to the US and in favour of his release.

Julian Assange faces up to 175 years in prison in the US where he faces 18 counts of espionage related offences. All of the charges relate to his role in publishing classified US documents and diplomatic cables which revealed war crimes and other criminality perpetrated by US-led forces in Iraq, Afghanistan and US-occupied Guantanamo Bay, Cuba. His substantive extradition hearings will restart on 18 May 2020 when witness and expert testimony will be presented by both sides.