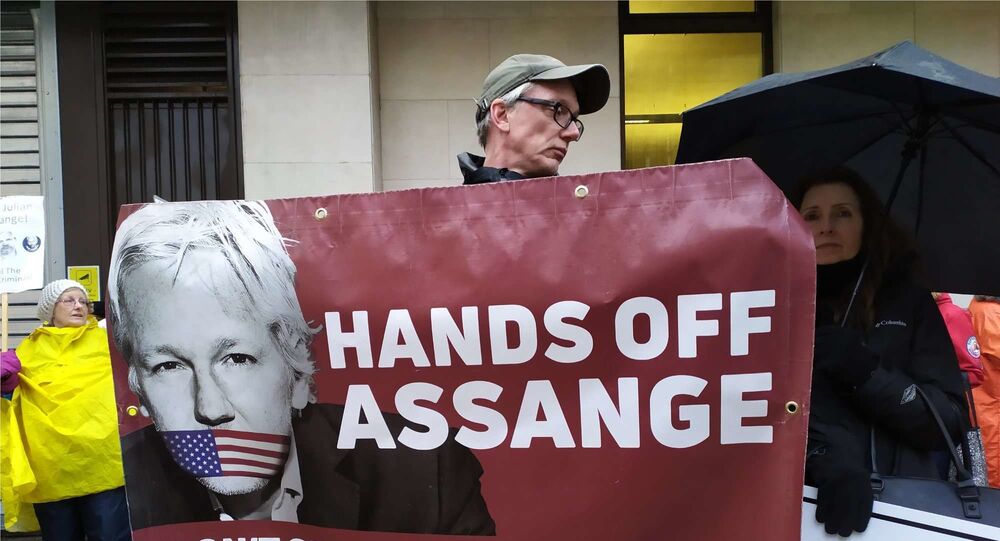 PARIS (Sputnik) - Reporters Without Borders (RSF) has called for the release of WikiLeaks founder Julian Assange on the grounds of his rapidly failing health in prison.

"Reporters Without Borders (RSF) is alarmed by reports that Wikileaks founder Julian Assange’s health has deteriorated in detention, and calls for his immediate release on humanitarian grounds. RSF condemns the continued targeting of Assange for his journalistic-like activities, which sets a dangerous precedent", RSF said in a statement.

It also said that Assange's rights were being violated ahead of the extradition hearing scheduled for February 2020. The nonprofit organization is specifically concerned over claims that the WikiLeaks founder is not being given proper access to legal materials or his defence team to prepare for the hearings.

"The US should cease its persecution of Assange and drop the charges under the Espionage Act without further delay", RSF Secretary-General Christophe Deloire said.

In early November, Assange's father, John Shipton, said that his son was in very poor medical condition and needed to be allowed to see the doctors he chose. In late November, a group of 65 UK and international doctors wrote an open letter in which they expressed their concerns over Assange’s health. Doctors requested that UK Home Secretary Priti Patel approve Assange’s transfer from Belmarsh prison in London to a university hospital. It was also suggested that Assange's condition was so bad he could die in prison.

Assange was arrested on 11 April by the UK police in the Ecuadorian embassy after Quito withdrew his asylum. Later that day, the Magistrates' Court sentenced him to 50 weeks in prison for breaching bail conditions in the UK.

© Sputnik / Justin Griffiths-Williams
London Court Sets Dates for Assange Extradition Hearings
Until November, the whistleblower faced possible extradition to the US and Sweden. On 19 November, Stockholm announced it was dropping its probe into sexual assault claims against Assange. The UK court is now to decide whether to extradite the fugitive journalist to the US where he is wanted on multiple espionage charges. The extradition hearings are set to begin in February.

Washington has indicted Assange on 17 offences under the 1917 US Espionage Act, in addition to an allegation that he conspired with former US army intelligence analyst Chelsea Manning to hack a classified government computer. In total, he faces a potential 175 years behind bars.