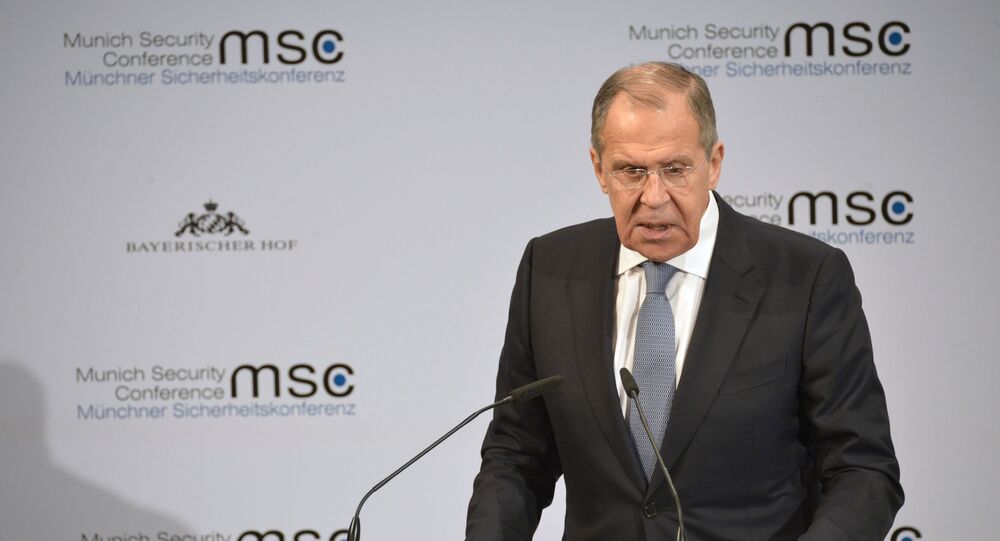 "The US, in its usual manner, has offered to resolve one of the most long-lasting conflicts of our time ‘in one go’. At the same time, Washington has essentially ignored the universally recognised international legal basis for a Middle East settlement, which includes resolutions of the Security Council and the UN General Assembly; and the Arab Peace Initiative", Lavrov said.

According to the Russian foreign minister, the new US peace plan stipulates the resolution of all key issues relating to the status of Palestinian territories by means of unilateral concessions in favour of Israel.

"Such an approach is unlikely to help rectify the situation. This is also indicated by the fact that the so-called ‘deal of the century’ is being completely rejected by the Palestinians", Lavrov told La Stampa.

Lavrov noted that it is necessary to hold multilateral talks to resolve the Israeli-Palestinian conflict and that a Quartet of international mediators (Russia, the United Nations, the US, and EU) could take up that responsibility.

"We are convinced that for a real advance towards a just two-state settlement of the Palestinian issue, first of all, genuine efforts by the Palestinians and Israelis themselves are necessary, and second, the most balanced and unbiased international support of the process is needed. In this context, we support the position reflected in the final statement of the last meeting of the foreign ministers of the Arab League member states on the need for multilateral negotiations on the Middle East settlement under international auspices", Lavrov said.

"We believe that the quartet of international mediators, which is the only mechanism recognised by the UN Security Council to accompany the Middle East process, could take on this role",  the minister added.

According to Lavrov, Russia, as one of the Quartet members, is ready to help the Israelis and Palestinians reach a compromise.

"In contacts with both Palestinians and Israelis, we will continue to persistently urge both sides to take a constructive approach in the interests of agreeing on negotiated solutions to all the existing problems", Lavrov told La Stampa.

Last month, US President Donald Trump presented his Middle East peace plan that envisioned Israel annexing settlements in the West Bank and the Jordan Valley, and maintaining Jerusalem as its undivided capital. The plan was rejected by Palestinian leaders.

Lavrov said that the situation in Libya has not really changed after the Berlin conference; it is impossible to resolve disagreements between the conflicting sides within the framework of just one meeting.

He pointed out that previous meetings held in Paris, Abu-Dhabi, and other locations had failed to change the situation for the better.

"… there is nothing surprising about that. The contradictions between the main participants in the Libyan conflict have gone so far that it is impossible to resolve them within the framework of one event, even such a representative one as the Berlin forum", Lavrov told La Stampa.

The minister stressed the importance of the final document signed at the Berlin conference and pointed to some positive developments that came after the talks.

"The joint 5+5 military committee has started its work, and practical preparations have begun for launching the mechanism of the Forum for Political Dialogue. Inter-Libyan consultations on economic issues are being initiated", Lavrov said, adding that progress should be reached simultaneously in all areas.

Lavrov stressed that the Libyans themselves must be the guarantors of their country’s territorial integrity and the goal of the international community is to contribute to creating all the necessary conditions for this, with only the UN Security Council able to give universal guarantees.

On 19 January, Berlin hosted an international conference on Libyan reconciliation, attended by over a dozen states and entities, including Russia and the United States. The conference resulted in a joint communique in which the signatories pledged to refrain from aiding either of the warring parties in Libya and observe an arms embargo.

On Sunday, the foreign ministers of Russia, Turkey, China, the US, the UK, and other participants in the Berlin conference on Libya called on the Libyan sides to accelerate negotiations for a permanent ceasefire.

The minister noted Moscow believes that only dialogue can help Washington overcome any existing disagreements with Iran, a stance that is reflected in Russia’s concept of collective security in the Persian Gulf.

"If we are talking about the latest swirl of US-Iranian escalation with which the current year started, then our position is known. We condemn any actions that contradict the principles of the UN Charter and lead to increased tensions in the region. The Pentagon attack on the airport in Baghdad organised on 3 January, which killed the commander of the special forces of [Islamic Revolutionary Guard Corps] IRGC of Iran [Qasem] Soleimani, was a flagrant violation of international law", Lavrov said.

The Russian foreign minister pointed out it was a civilian airport, emphasising that "these actions on the part of the Americans are beyond the limits".

"Russia advocates overcoming the existing differences solely through dialogue, at the negotiating table. This is what the Russian concept of collective security in the Persian Gulf region, presented last summer, is aiming for. So, in contrast to the confrontational schemes promoted by a number of states, we are offering the region a constructive, unifying agenda, and are calling for the formation of mechanisms for joint responses to challenges and threats", Lavrov told La Stampa.

He added that a consistent implementation of the Russian initiative would become an important step towards improving the situation across the entire Middle East and promoting mutual trust in the region.

Tensions between Iran and the United States escalated after the US assassination of top Iranian general Qasem Soleimani on 3 January. Tehran launched missile attacks on bases hosting US troops in Iraq in response to the killing in January.

Also last month, Iran announced that it was discontinuing all remaining obligations under the Joint Comprehensive Plan of Action (JCPOA), often referred to as the Iran nuclear deal, which was signed in 2015 by Iran, France, Germany, the United Kingdom, Russia, China ,and the United States. In May 2018, the United States pulled out of the agreement, which aimed to curb Iran’s nuclear activity, and re-introduced sanctions against Tehran.

Iran started to gradually reduce its JCPOA commitments in May 2019. However, Tehran said it was ready to return to fulfilling its obligations if sanctions were lifted and was going to continue cooperating with the International Atomic Energy Agency (IAEA).

Lavrov revealed that the next meeting of the High Russian-Italian Interparliamentary Commission will take place in the Russian capital next month.

"Inter-parliamentary cooperation plays an important role in strengthening mutual trust. We hope that the holding of a regular meeting of the High Russian-Italian Interparliamentary Commission in March in Moscow will become an important step in its development", Lavrov said.

The last meeting of the commission took place in March of last year in the Russian capital.

The diplomat said that Russia is ready to assist Italian businesses in terms of cooperating on production with an emphasis on production being located on Russian territory.

"We know that in Italy there are more and more calls for returning to the previous level of bilateral relations. Interest is being expressed in building a Russian-EU dialogue on a pragmatic, mutually beneficial, non-confrontational basis. Of course, we welcome this attitude", Lavrov said.

He added that sanctions are having a negative impact on Russian-Italian relations with trade between the two countries having gone down from $53.8 billion in 2013 to 26.9 billion in 2018.

"Italian entrepreneurs who are firmly determined to continue working in our country are very concerned about the current state of affairs. On our part, we are ready to assist your companies in the transition from predominantly deliveries of products made in Italy to the Russian market to production cooperation on the principle of ‘made with Italy’ with an emphasis on the localisation of production in Russia", Lavrov told La Stampa.

There are currently about 500 Italian companies working in Russia, in different areas, including the food and processing industries, innovations and information technologies, and production of building materials.