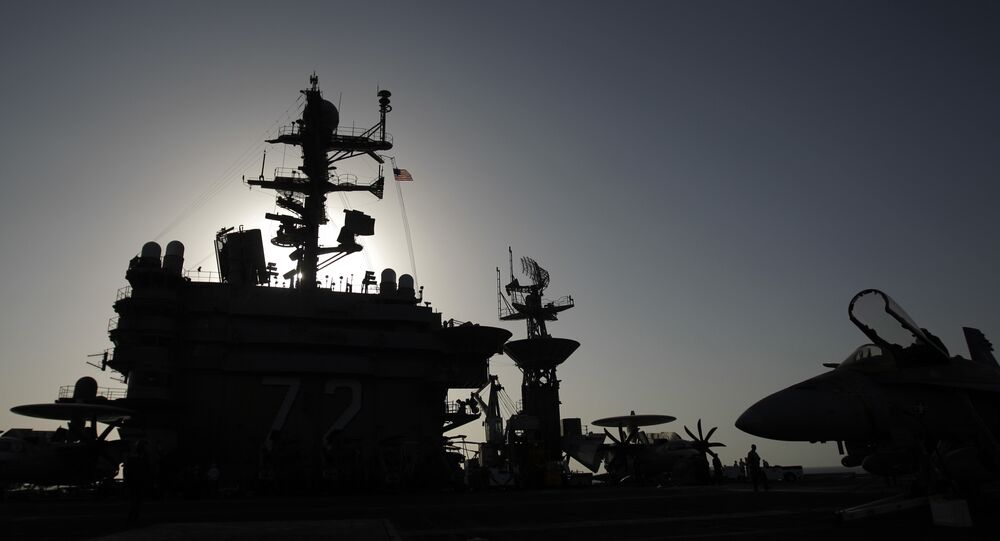 Lavrov: Russia Believes the West is Artificially Stirring Up Tensions in Persian Gulf

In May, the US sent an aircraft carrier strike group to the Middle East citing an unspecified Iranian “threat” to American interests in the region. Since then, the Persian Gulf has seen a string of dangerous incidents, including tanker sabotage attacks, ship seizures, and drone shootdowns.

Moscow is concerned over increasing tensions in the Persian Gulf, and it sees attempts to stoke these tensions, Russian Foreign Minister Sergei Lavrov said on Monday.

“We see some of our Western colleagues artificially trying to inflame the situation. And Russia and Iran oppose such attempts with a proposal to establish equal, mutually beneficial cooperation in this important region", Lavrov said at a meeting with his Iranian counterpart, Mohammad Javad Zarif.

The statement comes after the Pentagon said on Sunday that the US military conducted a spate of strikes targeting five Kata'ib Hezbollah facilities in Syria and Iraq.

Kata'ib Hezbollah is an Iraqi Shia paramilitary group formed during the Iraq War as an insurgency resisting the US military occupation following the 2003 US invasion.

Kremlin spokesman Dmitry Peskov has, meanwhile, stated that the US did not inform Russia about the attacks on Hezbollah facilities, including the ones in Syria.

Moscow Calls for Resolution of Gulf Tensions Through Dialogue

Earlier this year, Lavrov stated that Russia calls for a solution to tensions in the Persian Gulf  through dialogue and without unfounded accusations.

“Our contribution is the revised Russian concept of collective security in the region presented this summer”, Lavrov said in an address to the UN General Assembly.

In late July, the Russian Foreign Ministry unveiled, amid heightened US-Iran tensions, an updated version of an initiative called the Collective Security Concept for the Persian Gulf Region, which proposed the “renouncement of permanent deployment of troops of extra-regional states” in the region.

The concept further promotes multilateralism as the core of a new security system in the region, with Moscow suggesting that a security organisation be created that would include Russia, the United States, China, India, the European Union, and other interested parties.

Lavrov, for his part, noted that Moscow hopes the countries in the Middle East will take a closer look at Russia's plan to ensure security in the Gulf region in the wake of a drone attack on critical Saudi oil infrastructure.

On 14 September, a drone attack on Saudi Aramco's oil processing facilities forced the Saudi national oil and gas giant to shut them down, halving the country's oil production. Although responsibility for the attack was claimed by Houthi rebels, the US and Saudi Arabia pointed the finger at Iran, which refuted all the accusations.

Diplomatic tensions between Iran and the United States escalated into military tensions this past May, when the US dispatched a carrier strike group to the Middle East to tackle what Washington described as an “Iranian threat”.

Since then, the Persian Gulf has seen a string of dangerous incidents, including tanker sabotage attacks, ship seizures and drone shootdowns, with Tehran and Washington blaming one another for the escalations and threatening each other with deadly consequences in the event of war.

In a separate development this summer, the US announced the formation of a maritime coalition aimed at protecting commercial vessels moving through the Persian Gulf, the Strait of Hormuz, and the Gulf of Oman. Tehran, in turn, urged powers from outside the region to stay out of the Gulf, proposing the creation of a regional security effort to ensure the safety of local waters.