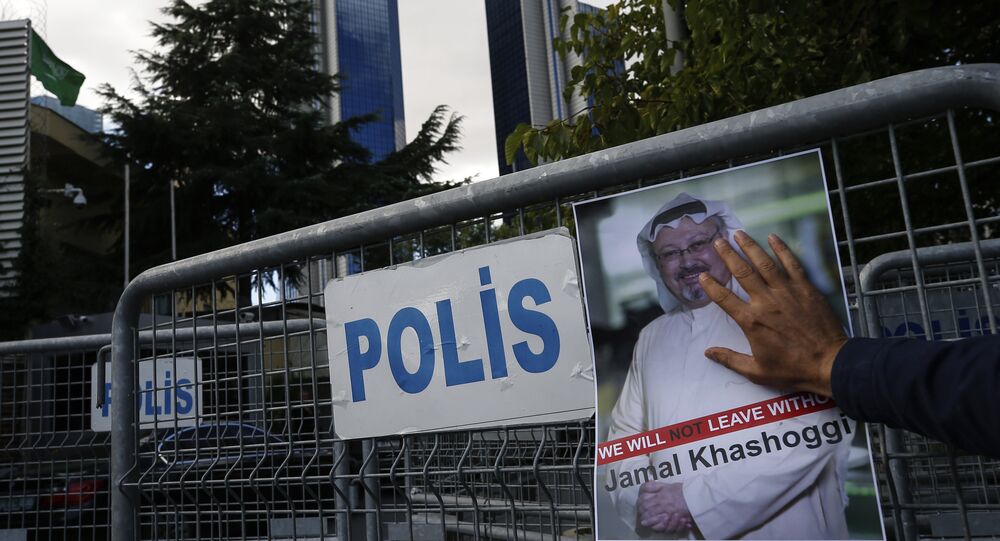 Saudi opposition journalist Jamal Khashoggi has gone missing and is thought to have been killed within the confines of the consulate of Saudi Arabia in Istanbul. Sputnik looks at some infamous cases where a person vanished into thin air.

Turkish television released CCTV footage on Wednesday, October 9, showing the moment Khashoggi entered the kingdom's consulate in Istanbul and also the movements of a number of suspects.

Khashoggi, who worked as a freelancer for the Washington Post and wrote several articles critical of the Saudis, vanished on October 2 after entering the consulate to obtain documents he needed to marry his Turkish fiancée, Hatice Cengiz.

Riyadh says murder claims were "baseless" and insisted the 59-year-old left the building but has yet to unearth any footage of him leaving.

The Jamal Khashoggi case could end up joining a string of infamous mysteries.

The aristocratic professional gambler went missing after the family's 29-year-old nanny Sandra Rivett was bludgeoned to death in the dimly lit basement of their home in Belgravia, central London.

His wife Lady Lucan claimed at the time she had disturbed him during the fatal assault before he attacked her as well, striking her four times with a length of bandaged metal piping before she fled.

We refuse to believe that Lord Lucan isn't in any way related to Brad Pitt… wtf. Come listen to Episode 15 now up on #iTunes #SoundCloud #Castbox #Stitcher etc as we chat all about this infamous couple! #podernfamily #ladypodsquad #podcast pic.twitter.com/bv95Wnq0Ef

​On her return to the family home, Lucan had vanished, his borrowed car later found abandoned and blood splattered with a section of lead piping in the boot at the cross-Channel port of Newhaven, East Sussex.

Before disappearing, however, Lucan stopped off to visit friends in a Sussex village, telling them he had stumbled on an attacker hitting his wife, who then accused him of hiring hitmen to kill her.

Over the years, there have been a spate of reported sightings around the world, including Australia, South Africa and New Zealand.

British newspapers have sent teams of reporters around the world, one even reporting he had fled to India where he was living as a hippy called "Jungle Barry."

Lord Lucan was officially declared dead by the High Court in London in 1999 but his body was never found. Lady Lucan died last year, aged 80.

​The Teamsters represented truckers and thousands of other workers and had considerable muscle in the US.

But under Hoffa they also got into bed with the mafia and Hoffa clashed with Robert Kennedy, then a young attorney, at the Senate Labor Committee on Capitol Hill in Washington.

In the 1960s Kennedy would become Attorney General under his brother, President John F Kennedy, and would go after Hoffa again.

In 1964 Hoffa was jailed for bribing a member of a grand jury.

President Nixon commuted his sentence in 1971 but banned him from union activities.

Hoffa challenged the legality of the ban and tried to regain control of the Teamsters.

On July 30, 1975, Hoffa was due to meet a couple of mob bosses at the Macchus Red Fox restaurant in Detroit.

He pulled into the parking lot but was never seen again.

In 2012 police dug up a garden in Detroit and the following year excavated a field just outside the city but his remains have yet to be found.

Ironically the General President of the Teamsters is none other than James P. Hoffa, his son.

Estate agent Suzy Lamplugh vanished on July 28, 1986 when she went to meet a client, known only as Mr. Kipper, at a house in Fulham, west London, which was up for sale.

Not long after, Suzy Lamplugh, Sandra Court and Shirley Banks were all murdered.
Sandra Court was in Bournemouth too.
John Cannan is in jail for Shirley's murder and and In my opinion a strong suspect in Suzy and Sandra's case.

​A police investigation failed to find Suzy or discover what had happened to her.

Her mother, Diana Lamplugh, campaigned for years for justice and also set up a trust to help keep women safe. She died in 2011.

"I don't have very much hope that I will find out what happened," Mr. Lamplugh told the BBC.

Miss Lamplugh was officially declared dead in 1994 and it is widely believed she was murdered.

In 2002 police named convicted murderer and rapist John Cannan as the prime suspect, but said there was insufficient evidence to prosecute him.

Cannan, who remains in jail, has always denied any involvement in Suzy's disappearance. The 72-year-old will be eligible for parole in 2023.

On March 26, 1967, Jim Thompson went for a stroll while on vacation in Malaysia's Cameron Highlands and vanished into thin air.

He left behind his wallet, passport, driving license and cigarettes.

​The 61-year-old US businessman's life was as colorful as the Thai silk which he produced and exported.

Thompson was a spy during World War II with the US Office of Strategic Services (OSS), a predecessor of the Central Intelligence Agency (CIA), but later became an architect, art collector and bon viveur.

In 1948 he founded the Thai Silk Company, which is now a multi-million dollar operation, and his name is still revered in the world of textiles in Bangkok.

In 1974 he was formally declared dead.

His disappearance has sparked dozens of conspiracy theories, including the suggestion that the CIA assassinated him because he had become sympathetic to the Viet Cong rebels in southern Vietnam.

Other theories claimed the womanizing American had been murdered by a jealous husband or a business rival.

Last year Llewellyn Toulmin, an author who conducted extensive research into Thompson, told DPA it was more likely he had fallen down a jungle ravine or suffered a gall bladder attack and died of exposure or starvation.

Richey Edwards was a guitarist with the popular British band Manic Street Preachers who vanished on February 1, 1995.

​The 27-year-old was last seen at the Embassy Hotel in central London but two weeks later his car was found near the Severn Bridge, 100 miles to the west, sparking the assumption that he had jumped to his death or drowned.

The Welshman had suffered from depression for many years.

But earlier this year his sister Rachel Elias said she had unearthed new evidence about what happened to him.

She said it now appeared he had driven across the Severn Bridge at 2.55am, not 2.55pm.

"We are hoping that it will establish a new line of enquiry because this is vital information that changes everything and turns it all on its head and needs to be looked at again," Ms. Elias told ITV.

On December 17, 1967 — a summer's day in the southern hemisphere — Australian Prime Minister Harold Holt went into the sea for a swim at Cheviot Beach, near Melbourne.

The 59-year-old vanished and it was always assumed he had drowned after being caught by a rip tide.

​The authorities mounted the largest search-and-rescue operations in the nation's history but his body was never found.

It was widely assumed he drowned after being caught by a rip tide, but the fact that his body never washed up triggered a number of conspiracy theories.

Some said he faked his own death, was assassinated by the CIA or defected to China after being collected by a submarine just off shore.

Amelia Earhart was a household name when she vanished in July 1937.

​The aviator had set many flying records and was a standard-bearer for women in aviation.

In 1937 she took off for her biggest challenge to date — to circumnavigate the globe.

She vanished somewhere over the Pacific but no wreckage was ever found and her disappearance remains one of the greatest unsolved mysteries of the 20th century.

Earlier this year a US scientific journal said it was likely bones found in 1940 on the desert island of Nikumaroro in what is now Kiribati were "likely" to be those of Earhart.

Forensic Anthropology claimed the bones proved she survived for a time as a castaway on Nikumaroro.

Madeleine McCann, a three-year-old girl, went missing from her family's holiday apartment in Praia da Luz on Portugal's Algarve coast on May 3, 2007.

​On the day she went missing, her parents Gerry and Kate McCann, had left their apartment at 8.30pm to go to a restaurant with friends.

Throughout the evening various members of the group returned to the apartment to check on their children.

At 10pm Mrs. McCann returned to the apartment and found Madeleine's bedroom window open, the shutter raised and her daughter gone.

She contacted the police and a huge search began but 11 years later no trace has been found of Madeleine.

Various theories have been postulated about what happened to Madeleine including a suggestion she was taken by a burglar after disturbing him, or that she was abducted by a pedophile gang.

Many people, including her parents, continue to believe Madeleine is still alive.