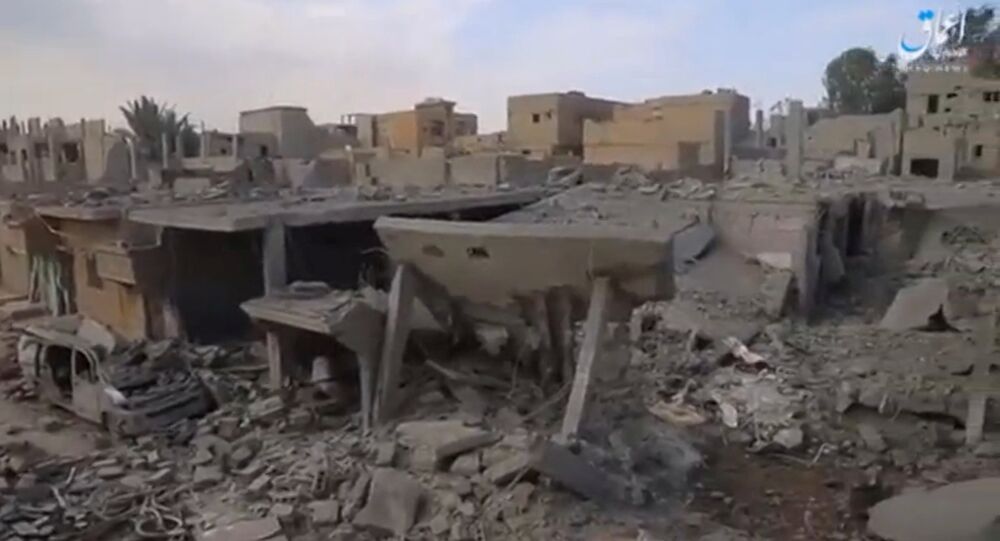 It’s a nightmare: civilian deaths in Syria and Iraq in the ongoing war against Daesh are rising faster than local officials, and remote military intelligence gathering, can count, and the US-led coalition seems unwilling to do anything about it.

Prompting international outcry and repudiation, the ongoing warfare in Syria and Iraq has claimed so many innocent lives, and displaced so many people, that the UN now names it the greatest humanitarian catastrophe since World War II, and no end is in sight.

With long-term military investment in the region, the West appears in no hurry to stop the carnage, as deploying its military to faraway lands allows Washington and its allies to develop any number of deadly new technologies without endangering its own citizens back home.

The numbers of civilian deaths vary widely, depending on who you ask.

A recent US-led airstrike in northern Iraq, killing some 300 civilians, only adds to the estimated tally of the thousands, potentially tens-of-thousands, of bystanders killed in the ongoing war against Daesh in the region.

Current estimates put the figure at between 300,000 and 500,000 civilian deaths, for the stated purpose of wiping out a band of terrorists said to be, at its height in 2014, no more than 30,000 members, according to CIA estimates.

Civilian deaths are not decreasing, even as Daesh continuously loses territory and its members are killed or go to ground to surface in another place, under another name.

As the fighting continues, the US and its allies are slow to act to mitigate the ever-rising tally of civilian deaths in the region, a byproduct of their own military moves.

According to The Los Angeles Times, following the inauguration of US President Donald Trump in January, the US-led military coalition has been engaged in its heaviest bombing campaign to date in the region, focusing on retaking the city of Mosul, Iraq, once the center of Daesh activities.

According to multiple sources, these increased bombings have killed more civilians in the area in just the past two months than since the war was initiated in 2014.

Following Trump's inauguration as US president, the Pentagon has been observed to have a much freer hand in running its campaign of destruction in the area, under the branding banner of the War on Terror.

But it is not only the terrorists who are being effectively eliminated in the region, as those that were born and live in these war-torn states see their lives crumble as infrastructure, including water, power, healthcare, and education is continuously destroyed.

The Pentagon has consistently refused to release its statistics regarding the death of civilians during its wars, although the US military has acknowledged that the numbers are likely higher than supposed. Investigations by the US into collateral deaths in the region are rare.

Pentagon civilian casualty reports, when released, are quickly refuted by independent organizations who suggest that the official numbers are inordinately low.

Pentagon death statistics are "implausible […] when compared to any other air campaign in history," stated senior fellow Micah Zenko of the nonpartisan Council on Foreign Relations in Washington, DC.

"It just doesn't add up when you look at the number of munitions being dropped," he added, cited by the Los Angeles Times.

Representatives for the Pentagon baldly confirm their inability to confirm civilian deaths.

"We don't have any means of going and searching out people and, honestly, we don't have the manpower," said US Army Colonel Joe Scrocca, a Pentagon spokesman based in Baghdad.

As worldwide criticism of US involvement in the region continues to mount, the Trump administration digs in its heels, offering no relief from the greatest humanitarian crisis in recent history.

Echoing much of the sentiment on Capitol Hill, "The substantial increases in civilian deaths caused by US military force in Syria and Iraq brings into question whether the Trump administration is violating the Law of War," according to US Representative Ted Lieu (D-CA), a former Air Force prosecutor, in a letter sent last week to US Defense Secretary James N. Mattis.