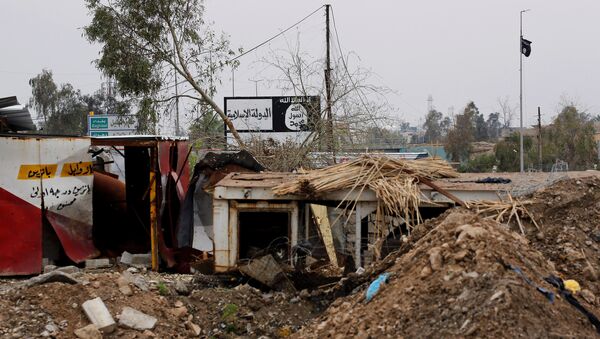 © REUTERS / Youssef Boudlal
Subscribe
International
India
Africa
The humanitarian situation in the Iraqi city of Mosul, which is being liberated from the Daesh jihadist group (banned in numerous countries, including Russia) is catastrophic, but the city cannot be left to terrorists, Iraqi President Fuad Masum told Sputnik.

BAGHDAD (Sputnik) — The Iraqi forces backed by the US-led international coalition began the operation to free Mosul from Daesh in October 2016. In January, the eastern part of the city was freed, but the mission to free the western part is ongoing.

"Of course, what is happening [in Mosul] is a humanitarian catastrophe… The humanitarian situation is definitely difficult, but it would not be sensible to leave the city to terrorists,… they should be fought, and this fight has its price," Masum said.

Daesh Fighter Fesses Up Location of Mass Grave in Iraq
Civilian casualties in US-led coalition airstrikes on western Mosul two weeks ago were not intentional, the Iraqi President added.

"This is not a deliberate intent, strikes against residents and the destruction of the area," Masum said in an interview. "But sometimes there are unintended mistakes."

The Pentagon confirmed late last week that an initial investigation of a March 17 airstrike on an apartment bloc in Mosul, believed to have killed more than 200 civilians, found it was conducted by the US-led coalition.

"There is coordination between the US coalition and the Iraqi security forces, but sometimes it malfunctions," Masum said in an interview.

According to the International Organization for Migration's February report, 223,980 had fled the Mosul area since October 2016.

Earlier in the day, Amnesty International accused the US-led coalition of "flagrant violation of international humanitarian law" as the coalition failed to take precautions to prevent high death toll among civilians. The statement came after media reported Thursday that at least 200 people, many of whom were civilians, were killed in an airstrike in Mosul.

"The relations between the two countries are strategic, and the fact that they carried out a strike on this building does not mean that it was a deliberate act of aggression," Masum said in an interview.

He confirmed that "the nature of the fighting in this part of Mosul led to the postponement of the operation in order to find more acceptable methods." An investigative commission is looking into "whether there was a communication failure, whether the information was erroneous," Masum said.

"But this issue must be thoroughly investigated," he added.

No Sectarian Conflict to Erupt

Sectarian conflict is unlikely to erupt in Iraq after the liberation of Mosul, Iraqi President added.

"We cannot say that after [liberation of] Mosul there will be a sectarian conflict. There are some political parties that hide their faces behind religious slogans, and it is unacceptable and wrong."

According to the Iraqi President, after the liberation of Mosul very important steps will have to be taken to ensure national reconciliation.

"We see what happens after Mosul. Those who cooperated with the IS, but were not involved in the killings, return to their villages, neighborhoods and cities. Those who fought against the IS, also return. There is a conflict. Thus, it is necessary to control the situation, to avoid conflict as a result of displaced persons returning to their neighborhoods," Masum said.