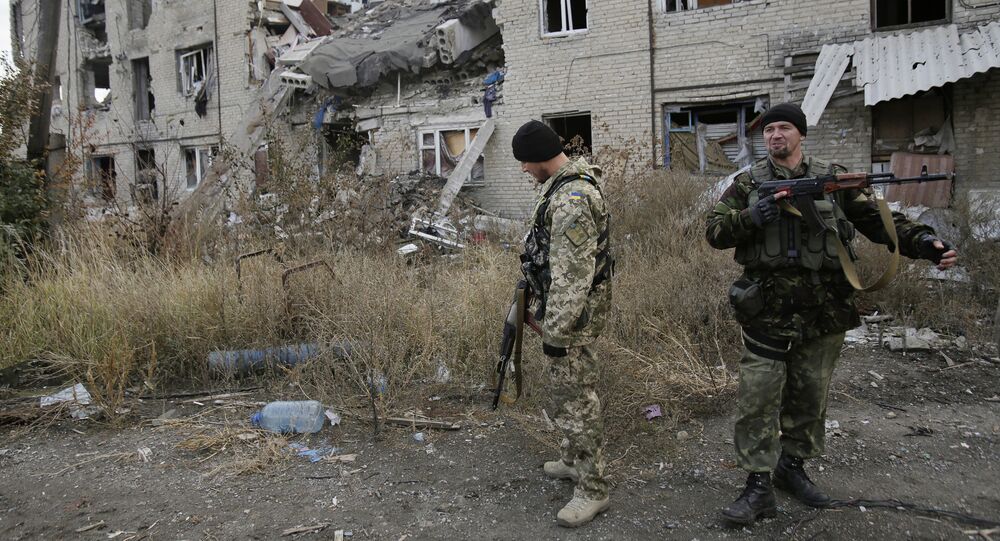 A surge in military attacks this week by NATO-backed Kiev regime forces on the breakaway eastern Ukraine regions is no mere coincidence.

It is the reaction to events in Syria by the US-led military alliance in its hybrid warfare against Russia.

© AFP 2020 / ANATOLII STEPANOV
State Department Expresses Concern Over Spike in Violence in Eastern Ukraine
Hundreds of ceasefire breaches by troops belonging to the Ukraine Armed Forces (UAF) are being reported in the separatist self-declared republics of Donetsk and Luhansk. Over the past few days, several towns and villages have come under intense shelling from artillery, rockets and mortars in stark violation of the Minsk agreement.

That agreement was brokered by Russia, Germany and France during 2014 and 2015, and was meant to facilitate a political settlement between the Western-backed Kiev regime, which came to power in a coup d’état in February 2014, and the breakaway provinces of Donetsk and Luhansk, which refused to recognize the legitimacy of the usurper Kiev cabal.

Houses, schools and water treatment plants have been hit as the UAF and associated Neo-Nazi militias move heavy weaponry close to the so-called contact lines. All indications suggest that the NATO-backed Kiev regime is mobilizing for a renewed offensive on the mainly ethnic Russian Donbas region comprising the Donetsk and Luhansk People’s Republics.

© Sputnik / Valeriy Melnikov
OSCE Special Envoy Hopes Water Supply Issue to Lugansk Region Gets Solved Soon
So far, the militia of the DPR and LPR have repelled the offensive, with dozens of casualties reportedly suffered by the Kiev regime’s military.

The timing of the large-scale attacks on Donbas comes just as the US and its NATO allies incur a strategic setback in their covert war for regime change in Syria. The liberation of the battleground city of Aleppo last week by the Syrian army, supported by Russian, Iranian and Lebanese allies, portends the end of the nearly six-year conflict in Syria.

The routing of jihadist militants from Aleppo, who had been backed covertly by the US and certain NATO powers, including Britain and France, has signaled the end of the regime-change project in Syria to oust the government of President Bashar al-Assad.

© REUTERS / Khalil Ashawi
Turkish Ex-Intelligence Head to Sputnik: Ankara's Syria Policy Set the Stage for Envoy's Murder
NATO member Turkey had played a key role in the US-led dirty war on Syria, serving as a conduit for fighters and arms to the proxy jihadist militants trying to overthrow Assad – a longtime ally of both Russia and Iran.

But now Turkey seems to be aligning with Russia and Iran to bring an end to the war in neighboring Syria.

This week, foreign and defense ministers from Russia, Iran and Turkey met in Moscow to declare their commitment to end the Syrian conflict.

The New York Times reported: “Russia, Iran and Turkey meet for Syria talks, excluding the US”. Pointedly, it added: “The new alignment and absence of any Western powers at the table all but guarantee that President Bashar al-Assad will continue to rule Syria under any resulting agreement.”

In other words, it’s “game over” for Washington and its criminal enterprise to subvert Syria.

The setback for American imperialist scheming in the Middle East cannot be overstated. For decades, US rulers have seen it as their God-given exceptional right to roll over any foreign government deemed unfit for their geopolitical interests. Syria was among target countries on the American hit-list, which came into action back in March 2011 when the US and its NATO partners and regional client regime unleashed hell with terror proxies.

US ambitions of conquest in the oil-rich region have now been dealt a stunning blow after Russian President Vladimir Putin ordered military operation at the end of 2015 to support the Syrian state, along with Iran and the Lebanese resistance movement Hezbollah.

© AFP 2020 / Thaer Mohammed
Aleppo Twitter Girl Bana Is the 'Ultimate Propaganda Stunt' - Syrian Activist
Despite a massive propaganda campaign orchestrated by the Western media and Washington puppets at the United Nations, the Syrian army and its allies have won a historic victory in retaking Aleppo from NATO-backed jihadists.

Not only is this a bitter military defeat for Washington. It is a political and moral triumph over Western lies as told through major media corporations. The latter were saturated with claims of atrocities and crimes against humanity committed by Syrian and Russian forces. Those reckless claims have now been exposed as blatant fabrications, as the people of Aleppo openly celebrate liberation from Western-backed jihadists who had imposed a reign of terror on large parts of the city for nearly four years.

© Sputnik / Iskandar Aminov
'Horrendous Terror Act': Who Was Behind the Murder of a Key Russian Diplomat
It seems significant that only days after the liberation of Aleppo, Russian ambassador Andrey Karlov was brutally assassinated in Turkey’s capital Ankara, when a gunman shot him in the back as he addressed a cultural event. The murder was evidently aimed at derailing the political talks underway between Turkey, Russia and Iran. Who would benefit from such an atrocity? Obviously, the US-led NATO powers.

If NATO military intelligence did not specifically order the assassination of Karlov, we can at least say that Washington and its Western allies certainly created the climate of hatred and demonization that made the Russian diplomat a “legitimate target”.

A further significant development is the renewed offensive by the NATO-backed Kiev regime against the ethnic Russian people of east Ukraine. Again, this provocative move comes only days after the spectacular military victory by Russia and its allies against NATO’s jihadist proxies in Aleppo, and possibly now for the whole of Syria.

Make no mistake, the reactionary junta that seized power in Kiev is a surrogate for NATO’s long-held offensive designs on Russia. Citing unsubstantiated “fears” of Russian aggression, NATO has given itself a license to escalate troops and missiles on Russia’s border. Washington and its European lackeys have financed, armed and trained the Kiev regime. This week, British defense minister Michael Fallon announced more British army training for Kiev’s forces, claiming that it was to counter Russian aggression. Fallon had the cheek to spout this nonsense in the same week that the assaults on eastern Ukraine have surged.

At a NATO-Russia summit in Brussels earlier this week, the US-led military alliance had the gall to call on Moscow to influence "Russian separatists" in Donbas to "honor the Minsk ceasefire".

© AFP 2020 / GEORGE OURFALIAN
US, EU Mainstream Media Churn Out Fake News to 'Support NATO's Military Policy'
Russian delegate to NATO Alexander Grushko reportedly introduced some reality to the meeting by pointing out the hundreds of violations being committed in recent days by the Kiev regime. Such violations are par for the course, since the NATO-backed junta first launched its offensive on the region back in 2014, and which has resulted in up to 10,000 deaths.

As with the Syrian war, Washington and its NATO allies, aided and abetted by the Western news (sic) media, play with semantics and illusions, and insult common intelligence. In Ukraine, NATO is waging a covert war every bit as it was in Syria, where as many as 400,000 people have been killed and from which Europe is struggling with its greatest refugee crisis since the Second World War, including the threat of terror attacks as seen in France and Germany this week.

Shamelessly, Washington and its Western subordinates accuse Russia of hybrid warfare and aggression. The reaction to defeat in Syria through ramping up conflict in Ukraine shows that it is the US-led NATO alliance that is the real culprit of hybrid war and aggression.

Mainstream Media so 'Committed' to Syrian War, It Shows Only One Side of Story

Is Mainstream Media Saving You From Yourself?