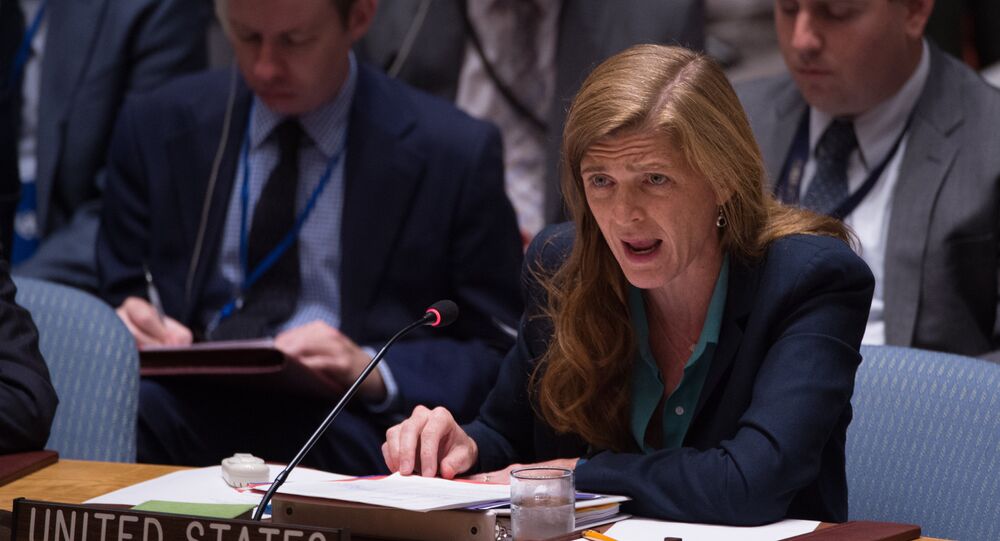 What stood out most during the verbal broadside unleashed by Washington's ambassador to the United Nations, Samantha Power, at her Iranian, Syrian and Russian counterparts over the fighting in Aleppo, was her ability to do so with a straight face. It was testament to the ability of US exceptionalism to keep its proponents cocooned from reality.

"Aleppo will join the ranks of those events in world history that define modern evil, that stain our conscience decades later. Halabja, Rwanda, Srebrenica, and, now, Aleppo," Power said, from the vantage point of a moral high ground resting on foundations of quicksand.

Rather conveniently, the US Ambassador neglected to add Korea, Vietnam, Iraq, or Libya to the list, countries ravaged and destroyed in service to US and western imperialism. Or how about Gaza and Yemen, where Israel and Saudi Arabia, Washington's closest Middle East allies, have engaged in the mass slaughter of civilians. When it comes to Aleppo's suffering, the scenes of celebration by thousands of its citizens over their liberation refutes the attempt by Ms. Power and others in the West to paint the Syrian Arab Army, made up of soldiers from every sector of the country's religious, ethnic, and cultural mosaic, as a latter day Waffen SS, an army of occupation executing women and children at random. At the same time Salafi-jihadist groups such as the Nusra Front have been painted as the modern equivalent of the French resistance or Partisans.

It has been preposterous to behold, part of an intense campaign of demonization motivated not by any concern for human rights or civilians, as maintained, but over the fact that Washington and the West's objective of regime change in Damascus has been denied.

The narrative being spun that civilians are being executed in east Aleppo is refuted by the fact that thousands of those very civilians have sought sanctuary in government held west Aleppo throughout the fighting. Many of them have reported people being shot at by armed groups for daring to try to leave. Meanwhile, the reports that have been carried in the Western media of atrocities being committed by pro-government forces are unverified. There have been no Western journalists in east Aleppo throughout the conflict, for the simple reason that none would have dared set foot in that part of the city because they know full well that they would likely be kidnapped and/or beheaded in the event.

No one with a heart could deny the scale of human suffering that has taken place in Syria, with Aleppo its most grievous recent example. This brutal conflict, as it enters its sixth year, is one that involves the armed forces of a secular government of a pluralist country, along with its allies, pitted against an Islamic Khmer Rouge in various guises and its allies — namely the Saudis, Qataris, Kuwaitis, and Western governments that have throughout played a game of good jihadists versus bad jihadists.

Clearly, far too many people have perished in the conflict, including upwards of 60,000 Syrian troops, as revealed by the UK's Middle East correspondent, Robert Fisk, back in August. But no serious person could deny the truth that many thousands more civilians would perish in the event Nusra and other such groups managed to succeed in taking control over Aleppo, rather than pro-government forces.

Placing Aleppo in its proper context leads us to the irrefutable role of Washington in prolonging the suffering of a country whose only crime is that it was deemed next in line for the doctrine of regime change in recent years, but which unlike those that have gone before — Iraq and Libya — has proved strong enough to withstand it.

For those in doubt, Washington's objective of destabilizing Syria dates back to at least 2006, evidenced in the classified memo, made public by WikiLeaks, sent from the US embassy in Damascus to Washington in December of that year. It contains an analysis of the Assad government, its strengths and weaknesses, and how it might be undermined. What should be borne in mind is that there is a direct correlation between this long term US strategy when it comes to Syria, and the disinformation that has been rolled out in response to the fact that Syria, supported by its Russian, Iranian, and Lebanese allies, is winning the conflict.

This is not to allege that there was not a movement for reform in Syria back in 2011, inspired by a so-called Arab Spring that had swept through the entire region demanding democratic and political reform. And this is not to suggest that the Syrians who supported this movement did not have any legitimate grievances with their government. But there is a marked difference between reform and ruin, and it is the latter course upon which this movement embarked when it was taken over by Salafi-jihadists intent on the mass slaughter and extermination of the country's minorities.

Samantha Power knows all this, of course; she knows it but chooses to ignore it, favoring instead moral tirades of the sort she unleashed at the UN against those who are fighting to save yet another Arab country from the fate of the sectarian abyss fashioned in Riyadh and supported by Washington as a lesser evil when compared to a secular Arab state that refuses to kowtow to its writ.