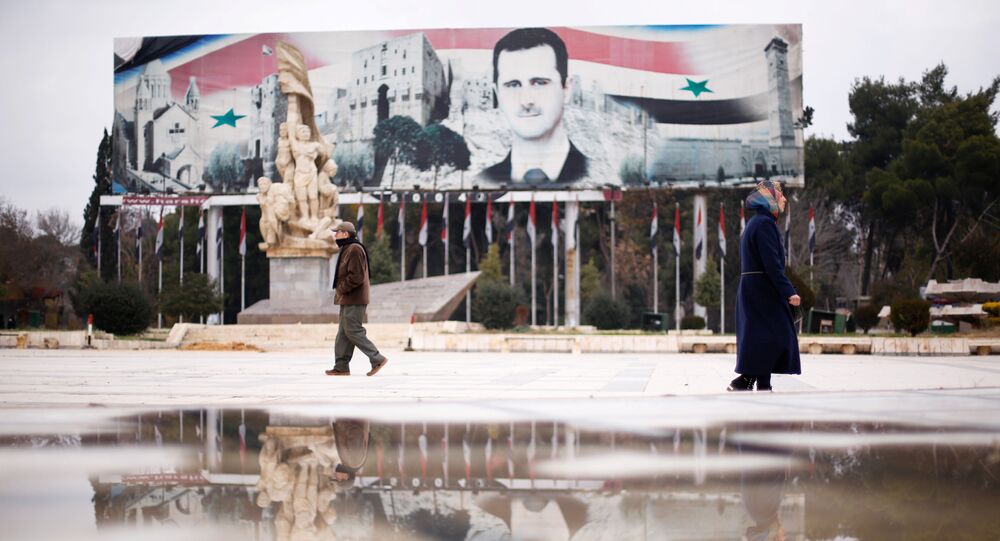 In October, the Chicago Tribune ran a story covering #StandWithAleppo, a popular twitter handle and hashtag created by "two Chicago moms" looking to document the plight of children in besieged E. Aleppo. But as some observant social media users have since discovered, one of the women turned out to be a journalist, the other the head of a SuperPAC.

In the run-up to eastern Aleppo's liberation by the Syrian army last week, #StandWithAleppo was turned into an extremely popular Twitter hashtag, users joining the Western mainstream media in condemning the Syrian government and accusing it of committing war crimes in the city. In spite of numerous stories, photos and video materials by alternative media showing that the city's residents were actually mostly relieved by their liberation, the hashtag has effectively become a rallying cry for the anti-Assad, anti-Russian narrative pushed by the mainstream media and Western governments.

But as one very observant Twitter user searching for the origin story behind the viral #StandWithAleppo campaign has since discovered, Becky Carroll and Wendy Widom, the "two ordinary moms" who launched the campaign, are anything but ordinary.

2. Described by Chicago Tribune as a "Chicago mom," Carroll is in fact CEO of "public affairs & strategic communications firm " C-Strategies

​The Chicago Tribune, which interviewed the two women in October, described Carroll as a strategic affairs consultant who "decided it was time to do something" to help the suffering people of the city.

© REUTERS / Omar Sanadiki
"Aleppo Atrocities": The Mainstream Media's Latest Psy-Op
But there's a twist. According to her website, Carroll runs C-Strategies LLC, a Chicago-based consulting firm with extensive experience in the public sector. In fact, the site's 'about us' section says Carrol was the National Director of the Women for Obama Campaign during his 2008 presidential campaign, and later served as CEO of Chicago Forward, a Super PAC that raised millions of dollars for Chicago Mayor and former Obama White House Chief of Staff Rahm Emanuel's mayoral reelection campaign.

​As for Wendy Widom, she's a self-described social media editor for CBS Chicago, part of a broadcast television network whose recent coverage of the situation in Aleppo features the kinds of bias to be expected from mainstream media sources.

In other words, a basic investigation of the women and their job descriptions shows that these 'ordinary moms' are actually political and media veterans contributing to spinning the msm narrative regarding the Syrian war, including the situation in Aleppo.

7. "Two ordinary moms." One is CEO of a strategic communications firm; other is a social media manager for CBS. https://t.co/ox8NaQK3Ar pic.twitter.com/QaEosYiiAH

​Last week, the Syrian army declared victory in Aleppo, ousting militants from most of their remaining bastions of resistance. Soon after, Western media quickly began spinning horror stories, accusing the Syrian and Russian militaries of atrocities in the liberated territories –allegations which both Syrian and Russian officials, and independent observers on the ground have dismissed as propaganda.

© REUTERS / Omar Sanadiki
Saudi Media Waging All-Out Information War, Spreading Fake Images of Horror in Aleppo [GRAPHIC PHOTO]
Independent journalists and observers have since started investigating the shady nature of some of the most popular social media accounts documenting the situation in the city, and pointing out the outright disinformation campaigns engaged in by Western and Gulf State media – including the use of photos from the Gaza Strip and showing the 'evidence' of organizations like the White Helmets, who have been discredited as radical militants engaging in spreading propaganda during their time off from fighting the government.

Ultimately, there is no doubt that the battle for Aleppo has caused civilian suffering. The problem, according to observers seeking a more or less objective picture, is that the mainstream media and many of their social media followers have taken a propaganda-based view of realities on the ground. Worse yet is the fact that there are those who consciously create this skewed image, even when they themselves know it to be untrue.