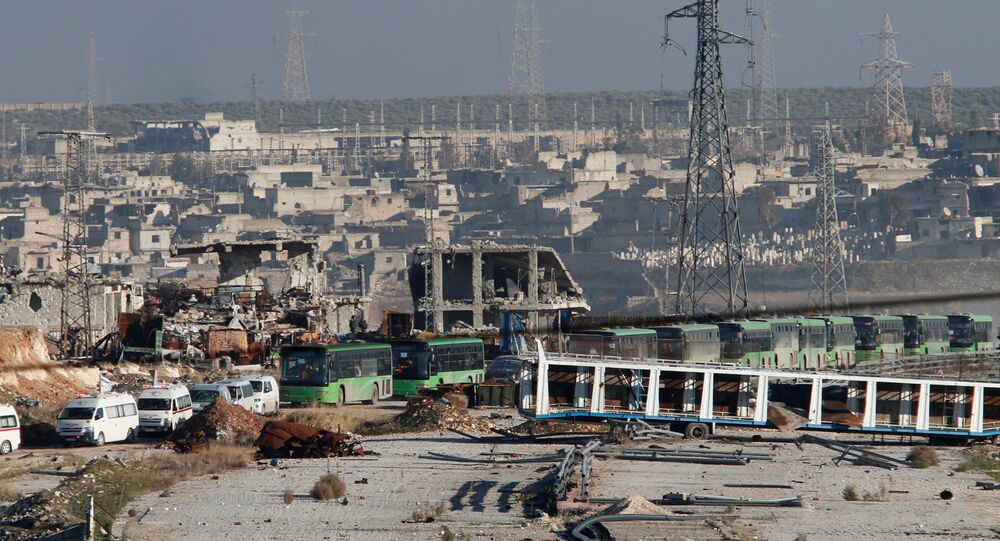 Mainstream Media so 'Committed' to Syrian War, It Shows Only One Side of Story

While the Syrian army, backed by Russian airstrikes, has been fighting to kick terrorists out of Aleppo and save the civilians trapped inside, demonstrations have been held across Europe with people protesting the Syrian government forces’ presence in the city.

Radio Sputnik discussed the issue with Tim Anderson, an academic expert in economics and international politics from the University of Sydney and author of the book "The dirty war in Syria."

“I think it’s one of the greatest divides that I have ever seen in publicity at the moment. On one hand you have people dancing in the streets in Aleppo or at least extremely relieved to be out of the horrible environment they were in and we have Western media which is talking about it like it’s really a huge disaster with people being slaughtered on the streets. It’s an extraordinary polemic really,” Anderson said.

Talking about the blame which is being put on the Syrian forces for atrocities against Syrian civilians, the analyst said that even the United Nations has joined in.

© AFP 2021 / AMER ALMOHIBANY
Not So Innocent After All: 'Black Deeds' of 'White Helmets' in Syria
“They [UN] published some photographs from Aleppo media center, of the White Helmets, which are these fictional bodies set up and founded by the UK, US and the French government. They have been running fabricated images for a very long time and even some UN officials have been putting this up as anonymous sources or naming sources that have been embedded with jihadist groups,” the analyst said.

He further spoke about the Syrian conflict and how it is very hard for western cultures to accept the realities of it.

“The workers weren’t at work at the Eiffel Tower that day at all. It was shut down and this mayor happens to be a very pro-Israel person and she decided to turn the lights out for five minutes, but in reality it was a great publicity cue for her,” Anderson said.Talking about how the mayor of Paris turned the lights off on the Eiffel Tower, the analyst said that actually the mayor was covering up a huge strike that was going on for months there.

© Photo : Vanessa Beeley
Aleppo Liberation Exposed Mainstream Media and Their Lies About Syria (PHOTOS, VIDEO)
He further spoke about the absurdity of how often the West has repeated this narrative in which Syrian Armed forces have gone and killed their own people for the past six years and how the rebels weren’t killing anyone.

Anderson spoke about his book "The dirty war in Syria" and how he went about researching material for his work. He spoke with multiple sources in Lebanon, Israel and Syria of course.

The analyst spoke about how the west is so committed to this war that they are presenting only one side of the narrative in which the Syrian Army are the bad guys and the rebels which actually have been killing people, boasting about cutting off people’s heads and recording it on camera for the past six years are being shown as the “good guys.”“There were Russian, German and Dutch journalists who have been on the ground in Syria and they were eye witnesses to the happenings inside the country. This was even before 2012, after that the people were beginning to leave Syria. Later on we got admissions from various government sources, even such as the US vice president,” Anderson said.

“It is an extraordinary conundrum and a great challenge to educators and people who have had some sort of commitment to the Western culture and what has now happened to this Western culture in that terrible storm of misinformation on Syria,” Anderson said.

While the Syrian Army, is fighting to kick terrorists out of Aleppo and save the civilians trapped inside hundreds have taken to Downing Street in London on Tuesday in a protest organized by activists under the hashtag – youth for Aleppo.

On Wednesday, thousands were reported protesting in Denmark and hundreds marched in Paris.  The Eiffel Tower shut off its lights in a show of support for the people of Aleppo.

In the past two days, nearly two thousand people took to the streets in Turkey's capital – Ankara — waving Syrian opposition flags in front of Iran’s and then Russia’s embassies.

The protests and demonstrations came amid mainstream media reports portraying Syrian government troops and their allies as the villains in Aleppo. Some even claimed that the Syrian troops were executing injured civilians, without any evidence being provided.