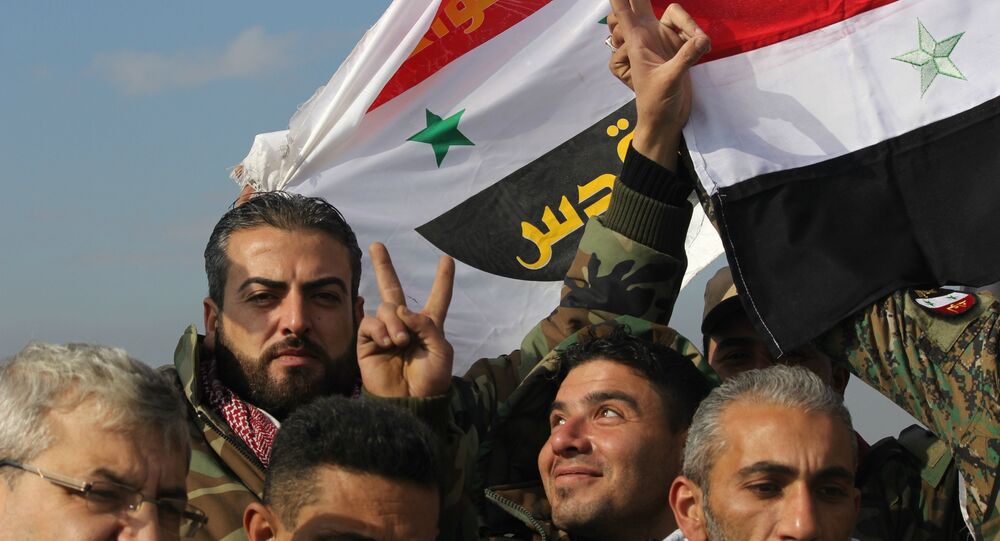 Almost 10,000 people have been rescued as a result of the operation to spur the militants' withdrawal from Aleppo. Sputnik Arabic spoke with some of these citizens who shared their gut wrenching stories about life under the terrorist’s oppression and how the Syrian Army rescued them from terror.

Bushara as-Said Taha is 35 years old and lives in the district of al-Suqre, which was under terrorist control right from the beginning. Her house was broken down, her furniture was burnt and she herself ended up on the street.

“We used to live freely and safely but then the terrorists came. They broke into our house and demanded that the men cooperate with terrorists. Whomever resisted them was tortured and killed. There were staged public executions in the main square of our quarter. We were seized with terror, it was as if the people had lost their mind,” Bushara told Sputnik Arabic.

She further said that she has a child, who is almost one and a half years old. Talking about her baby Bushara said, “She has suffered a lot in her short life. She did not have enough milk, food, clothing and diapers. Now she is crying from sudden loud noises, especially if they sound like the sound of bullets and shells.”

According to Bushara, after the liberation of the city people now have a chance for a normal future. This is what she had hoped for the last 5 years and that’s why she never left the city.

“We were created by God and we are at his mercy. Terrorists cannot conquer our spirit, it is not in their power,” she said.

Another citizen named Mariam Abdul Gani said that the terrorists deprived children of an opportunity to study.

© Photo : Vanessa Beeley
This is the Whole Story of Aleppo's Liberation by Syrian Army
“So many shells were falling from the sky it was literally like falling rain. Many innocent children were killed and parents had to stop sending them to school due to that. Children have lost five years now, now whoever can, will try to catch up.

She further said that the terrorists destroyed her house. Now there is no electricity, no water and no telephone. There is no possibility to communicate with the relatives.

“Besides there is a huge inflation and the prices on everything are extremely high and people are suffering because of that,” Mariam told Sputnik Arabic.

Terrorists inflicted terrible punishment on men if they were suspected of having links with government forces or if they opposed the militancy.

Abd al- Munim al-Hamdu, 37 years old, spoke to Sputnik with a heavy heart as he had lost his only child Bara who was just six years old.

“The day before his death, Bara and me we went for a walk. He wanted to eat a shawarma. We ate and then I began to take pictures of him and at some point he was distracted and looked at the sky. I told him: ‘Look at the camera,’ he replied “I'm talking to the moon, tomorrow we will meet and he laughed,” Abd said.

The father said that the next day Bara went to school in a quarter of Bustan al-Qasr. At that time it was a border area between army and the terrorists.

“Bara got out of the car and stood on the curb and looked at me. With his eyes he told me that he loved me and just after a few seconds a sniper killed him,” Abd said.

Abd is trying to overcome his grief and is trying to tell people truth about what the terrorists have done to the people. For the interest of other children and the country he works in the media of Aleppo in order to inform the public about what is actually been going on.