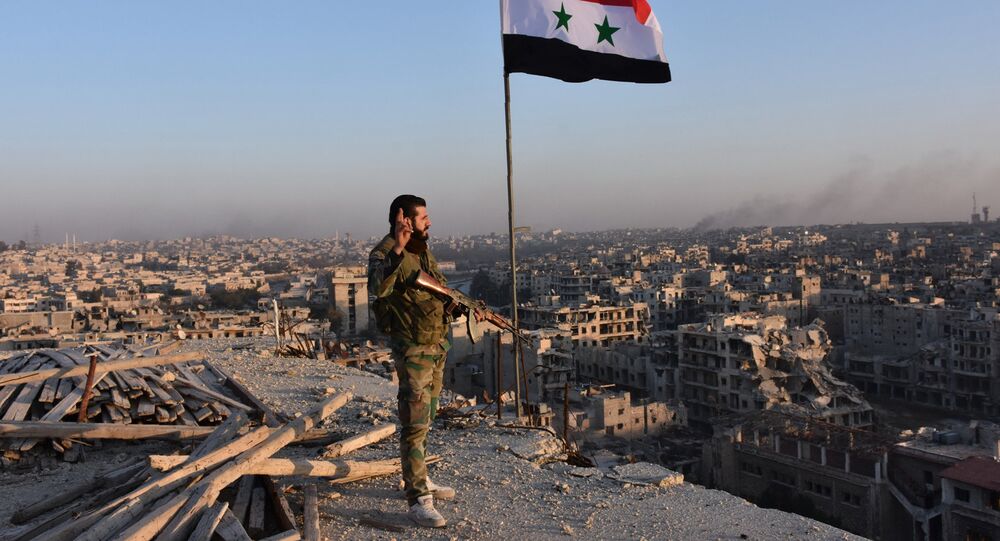 The US and EU mainstream media's fake news about the situation in Aleppo is part of NATO's offensive policy, Willy Wimmer, former Vice President of the OSCE Parliamentary Assembly and ex-State Secretary in the German Defense Ministry, told Sputnik.

© REUTERS / Omar Sanadiki
"Aleppo Atrocities": The Mainstream Media's Latest Psy-Op
It is hardly surprising that the UN and leading American and European media sources are spreading fake news about the situation in Aleppo, since they are aimed at supporting NATO, Willy Wimmer, former Vice President of the OSCE Parliamentary Assembly and ex-State Secretary in the German Defense Ministry, told Sputnik Deutschland.

On December, 13 the UN's Human Rights Office published a report claiming that the Syrian Arab Army (SAA) was committing "atrocities" in eastern Aleppo.

"We have also been informed that pro-Government forces have been entering civilian homes and killing those individuals found inside, including women and children," the report insisted.

However, these reports had not been proven by independent humanitarian organizations on the ground.

"I have first-hand assessments from independent humanitarian organizations, which still have their representatives in east of Aleppo. None of them confirm reports about committed atrocities, kidnapping people, who are escaping from eastern Aleppo," Russian Foreign Minister Sergei Lavrov highlighted last Wednesday.

Commenting on the UN's controversial claims, Wimmer emphasized that for many years such reports have been written in the interest of the US and their Anglo-Saxon allies.

"Unfortunately, for many years, we have had to assume that starting from the OSCE, the Red Cross and ending with the UN, such reports have been written in the interest of the Americans or Anglo-Saxons. We saw that the international organizations' reports had usually been passed to an American Ambassador or chief delegate prior to their publication, so that the American view on the matter could be presented," Wimmer pointed out.

© REUTERS / SANA
Moscow Urges UN Officials to Stop Being 'Part of Propaganda Campaign' Against Damascus, Russia
The German politician called attention to the fact that the US has always been the Red Cross's major sponsor, while the European nations' contribution to the organization amount to just one-two percent.

Although the international community expects that the organization's reports would be comprehensive and unbiased, in reality these expectations are rarely met, he noted.

Referring to the situation in Aleppo Wimmer stressed that the only states and authorities which are acting in accordance with international law on the ground in Syria are the Syrian government, the Russian Federation and the Islamic Republic of Iran.

Incredible as it may seem, over the last five years these actors have not encountered any significant support from the UN, the politician pointed out.

"We have learnt from experience of the Yugoslav War that the United Nations has become the instrument of NATO aggression," Wimmer underscored.

© REUTERS / SANA
Atrocities With No Proof? 'UN Staff Has Never Been Allowed in Syria Since Crisis Began'
Thus unsurprisingly, the international community's trust in such important organizations as the Red Cross, the OSCE and UN has been shattered over the years, he noted.

Although Sergei Lavrov denounced the accusations regarding the SAA's alleged "atrocities" in Aleppo as unfounded, citing independent humanitarian organizations on the ground, the mainstream media continues to circulate the UN report.

Still, in response to Sputnik's request about the sources behind the Human Rights Office's document, the UN refused to name them citing security concerns.

"This is part of the Western [information] warfare which we have seen since 1999 and the war against Belgrade. The Western mainstream media are meant to support the military policy of NATO or [the bloc's major] military powers — the United States, the United Kingdom and France," Wimmer explained.

He drew attention to the fact that the mainstream media does not throw into question the official position of NATO member states.

Furthermore, it seems that the organizations such as the UK-based [Syrian] Observatory for Human Rights or the White Helmets are "humanitarian" in name only, the politician remarked.

In his latest analytical report for Sputnik, political analyst Andrew Korybko turns the spotlight on the fact that "the recent barrage of reports alleging that the Syrian Arab Army is committing 'atrocities' against the liberated people of Aleppo stems from unsubstantiated Twitter accounts and melodramatic YouTube videos."

For his part, Albrecht Müller of NachDenkSeiten.de shed light on German mainstream media's one-sided coverage of the situation in Syria. Spiegel Online, for example, overlooked the fact that the Russian Defense Ministry broadcasted the operation to evacuate civilians from Aleppo with real time surveillance cameras.

He recalled that the current NATO Deputy Assistant Secretary General for Emerging Security Challenges, Jamie Patrick Shea, has been pushing ahead with his warmongering sentiment since 1999.

In the course of NATO bombing attack against Yugoslavia in 1999, Shea, then NATO spokesperson, justified the bloc's military campaign, claiming that "civilian casualties in Yugoslavia" were "a cost to defeat an evil."

"In light of this, you cannot expect that the mainstream coverage in the West would be accurate," the German politician noted.

"If two years ago the Federal Chancellery focused its attention on the fact that so-called spin doctors were employed, one would be aware where it's all going. Who still believes them? Actually no one; they even don't believe themselves!" he stressed.

While German Chancellor Angela Merkel is pointing the finger at Russia, Iran and Damascus for alleged "crimes" in Aleppo, it is no longer a secret for Europeans that it was Washington, London and Paris who incited the Syrian conflict, that turned into a five-year bloodbath, the politician emphasized.

"Where was the voice of the German Chancellor when it all began with the assistance of our [NATO] allies? Has Merkel ever called to abolish this shameful policy?" he asked.

Furthermore "those who were responsible for wars launched in violation of international law, like [former UK Prime Minister] Tony Blair, have become European representatives for the Middle Eastern region. That is to say, they turn a perversion into the system," Wimmer stressed.