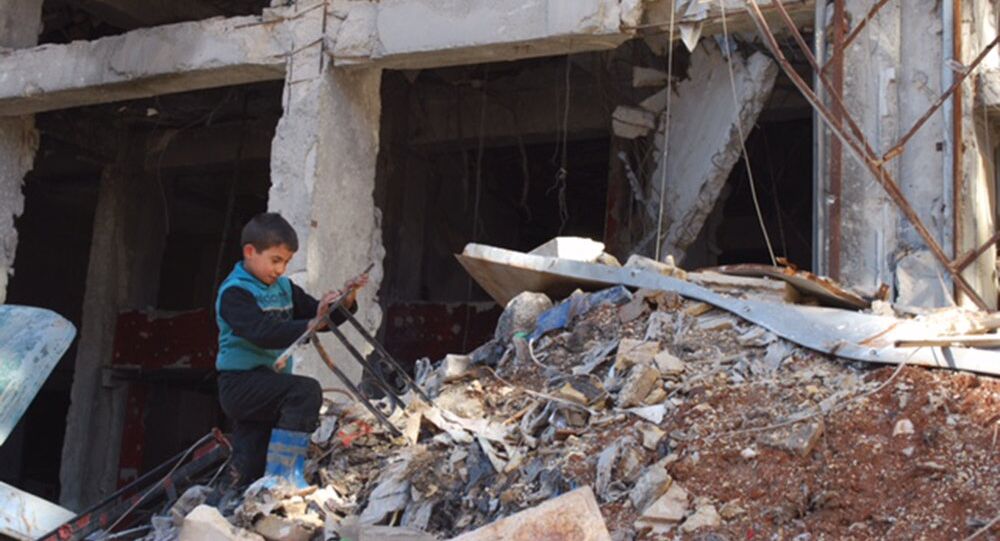 Residents of Syria's Aleppo are celebrating liberation of the city from militants by the national army, while the traces of militants’ presence are almost everywhere - the military still finds stockpiles of weapons and food, some documents, while there are also traces of the foreign presence.

© REUTERS / Abdalrhman Ismail
Kurdish Politician Says Al Bab Liberation Necessary to Ensure Aleppo's Security
ALEPPO (Sputnik) — Over the recent months, Aleppo, one of the largest city in Syria, became a major battleground in Syria with Damascus seeking to liberate the city divided into the western part held by the government and the eastern part controlled by the militants.

A RIA Novosti correspondent visited Eastern Aleppo, where he met with people and saw himself what the so-called moderate opposition left behind.

Aleppo’s terra incognita begins just after the Christian quarter of Aziziya, the inhabitants of which are preparing for the first time in five years to celebrate the New Year and Christmas on a large scale, with a big Christmas tree at the central square and streets, decorated with garlands. People still cannot get used to the life without blasts and funeral processions sirens.

© AP Photo / Burhan Ozbilici
Russian Ambassador Murder Caused by 'Propaganda of Aleppo Liberation Opponents'
The picture completely changes less than a mile ahead — cemeteries everywhere, no non-destroyed houses, while the road to the airport is cratered by bombs.

People have already started to return back to their homes, they are busy with clearing the debris and restoration works. But the war traces are everywhere, with many streets still having smoky smell, burnt and crumpled cars everywhere. The atmosphere is strained, people are intimidated and not very talkative.

FROM REBELS TO TERRORISTS

Still people are ready to answer the questions, as each person has its own tragic story to share.

"The leader of one of the terrorist units lived in my apartment. Look, there are booklets with Daesh emblem, documents on transferring a militant from one unit to another, while in another room there is a vest for ammunition and uniforms for 30 people," an elderly man called Abu Samir said.

Some time ago western heads of state and media said that eastern Aleppo was held by Syrian moderate opposition, the rebels fighting for their freedom against President Bashar Assad’s army. The question arises: why did the rebels need the propaganda booklets with the insignia of Daesh, a group that is recognized by many countries, including Russia, as terrorist?

© AFP 2021 / KARAM AL-MASRI
Iran's Security Council Secretary Slams UNSC Resolution on Aleppo Evacuations
"Do not be surprised by what you see. The banners and names are just a label. A terrorist remains a terrorist. Look, here is a transfer document," Samir said, giving the correspondent a dirty piece of paper.

The document looked very official, having a photo of a man and his name. The document said that the man was an "ordinary Feilak al-Sham militant" who sought to become an "official" terrorist and wanted to join the Nusra Front.

There were also some documents on transfer of terrorists into the ranks of "moderate."

Having said goodbye to Abu Samir at the army’s post, the correspondent started the conversation with Capt. Ali.

"We found in this area a facility producing shells from gas cylinders and warehouses with hand-made grenades. We have not touched anything, we are waiting for specialists. They should arrive tomorrow. The number of ammunition depots in Eastern Aleppo turned out to be higher than we had expected, combat engineers have been working for three weeks already without having rest," Ali said on the way to one of the warehouses.

Across the street there was a large building, with lots of burned equipment near it.

"This is children's hospital. The terrorists turned it into a prison, a Sharia court, while most likely on the upper floors there were terrorists’ headquarters. Let me show you," the captain said.

© AFP 2021 / GEORGE OURFALIAN
Explosion Hits Christian District of Syria's Aleppo During Liberation Festivities
At the entrance to the hospital there were two broken ambulances, both with handwritten inscriptions in Turkish language.

Having entered the building, the correspondent found an ID card under the table, saying "Sharia judge," having the personal data and photo. On the reverse side of the ID there was a list of "privileges" for its owner, including the right to pass a sentence with accordance to Sharia law, as well as a call for other groupings to give him the maximum assistance.

Inside the dark building there was a solitary cell.

"I told you, this is a real prison," Ali said, unlocking the door.

Inside the cell there was an iron bed, a toilet in the corner, and a shelf with the Koran above the bed.

Ali and the correspondent headed to the upper floors. It was difficult to say that the building had once been a hospital as no hospital beds or medical equipment could be found there. Instea,d there was broken and burned telecommunication equipment, boxes for ammunition, gun mounts, while windows were laid down with sandbags.

People are also returning to the old town, which suffered less damage than new quarters.

On the streets one can notice drawn red crescents, marking the places for humanitarian aid distribution.

Ali offered to visit a nursing home and talk to its head, who had been carrying out his mission even when the terrorists arrived in the city.

© AFP 2021 / GEORGE OURFALIAN
Syrian Forces Liberated Aleppo Owing to Crucial Help of Russia - Kurdish Politician
"This is our humble shelter, where the humanitarian aid is distributed now. Look, here is bread, hot food and medical supplies. We have not seen such amount of food for four years, while during the last months we had only bread and water," the man said.

He said he had worked all his life as a truck driver and often visited Russia. Then he returned to his native Aleppo and started to work in the nursing home 15 years ago, later becoming its head.

"The militants came to us rarely, sometimes there were foreigners. The corpse of one of them is still near the building, it was not cleared yet," the nursing home head said.

The correspondent asked the man to help him to talk to people queuing to get aid. People looked scared and tired, gave short answers to the questions. One of the women agreed to talk after seeing the head of the nursing home.

"What kind of freedom are you talking about? They took all our food, forced us to live under Sharia law. I'm Muslim, but I do not want to live in fear and hunger. During the last months we were receiving five pitas per family once in three days. Thanks God, we have real freedom now, we met with our relatives whom we have not seen for five years, while children were able to eat vegetables and fruits for the first time in few months," the woman said.

The husband of the woman was executed at the beginning of the war for refusal to fight on the side of the radicals. Their 16-year-old son was jailed, while the militants tried to impose him the Sharia values, threatening that he could repeat the fate of his father.

Meanwhile, on the other side of the city mass media and hundreds of people are monitoring the militants evacuation, which has been going on for several days. The city authorities hope the last militants would leave Aleppo on Tuesday and the war would never come back there.