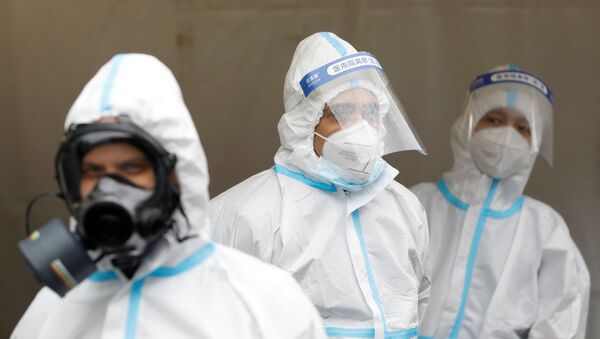 Demond Cureton
All materialsWrite to the author
China's handling of the ongoing COVID-19 pandemic has come under question by a few top US authorities and factions of the UK government in recent months. But as global responses to the crisis reveal the efficacy of national-level strategies, it appears that such questions remain political and less based on scientific data.

Internationally-acclaimed author, journalist and academic Martin Jacques explained China's influence amid the ongoing crisis, namely relating to the country's handling of the coronavirus pandemic as well as current and future relationships with major global powers such as the United States, Great Britain and the European Union.

Sputnik: You mentioned that you had spoken to one of China's leading intellectuals on the ongoing COVID-19 pandemic. Can you explain how China tackled the crisis as well as public sentiment related to Beijing's handling of the outbreak?

Martin Jacques: What was striking was, due to the lockdowns across Wuhan and Hubei province, they managed to completely stop COVID-19 from spreading across China.

For example, in Beijing there were only eight deaths and seven in Shanghai. This was really remarkable when you compare it to the United States, where it spread into every state and clearly the measures taken were grossly inadequate.

Despite fumbling through the early stages, China took hold of the pandemic in mid-January and realised the scope of the threat. The measures they took suppressed the virus, and there is now a progressive but rapid opening up of the economy.

So far, there has been no spikes in new cases, with most coming from elsewhere such as foreigners and Chinese overseas students. Traffic jams have returned to big cities, evidencing a rapid economic restoration, and the mood has changed a lot.

According to my friend, in January, there was a lot of criticism of the government for its handling of the epidemic, felt by a wide cross-section of people. But now the mood has reversed, firstly after China got on top of the crisis as effectively, or even more effectively, than other countries the manner I just described.

The other is watching the mess that many Western countries made of the situation, such as acting too late or failing to use the time China had given to prepare, in addition to using very variable strategies. The outstanding example being Germany and the worst Britain, with the United States being the worst globally. The mood is that now, people are feeling very good about China's response, in light of what might have happened, which is what the West has done, with a few exceptions.

Sputnik: A recent Lancet study evidenced the importance of contact tracing in stopping the spread of the pandemic in cities such as Wuhan and Shenzhen. Which measures did Chinese authorities take and how effective were they?

Martin Jacques: The first move they made was to stop people moving around using a major lockdown applied across all major Chinese cities. This was crucial to stopping the transmission, even amid the Chinese New Year, where millions of people move around the country, inevitably fomenting the spread of the disease.

Secondly, they took everyone's temperature. China has very good on-the-ground means of checking, inspecting and controlling, with residents at apartment blocks in cities receiving temperature checks before entering the premises, and if a COVID-19 infection was suspected, tests were immediately given. If results were positive, you were quarantined and contacts traced via an app designed by Tencent (WeChat).

NHS X Trialling New COVID-19 Contact Tracing App Amid Concerns on Privacy, Input From Google, Apple
The programme was rolled out on a nationwide basis, and even now, despite the virus being fundamentally under control, they still use an app system to monitor the situation, using three colours--red, green and amber.

Green means you're virus-free and can do the maximum of what's allowed, amber restricts some movements due to prior or suspected infections and red confirms a diagnosis and imposes a 14-day quarantine, with close monitoring of the population with contact tracing.

Efforts were also boosted by the fact people expect the government to intervene, stemming from Confucian traditions where people respect and look up to authorities with both looked at as one. This is in contrast to some nations, with extremes such as the US, where the government is widely viewed as a threat rather than a friend.

Sputnik: US president Donald Trump has continued the US trade war on China and launched a campaign against Beijing amid the pandemic, accusing the latter of leaking COVID-19 from the Wuhan Institute of Virology and 'covering-up' the outbreak. Why specifically is he and Secretary of State Mike Pompeo doing this in the absence of support from international bodies, the scientific community and even the Pentagon?

Martin Jacques: You don't need to be a rocket scientist to know what he's up to here. America's COVID-19 response has been a disaster. He's been completely irresponsible and denied there was a problem and even talked about it being a hoax. He didn't think it would ever happen in the US and thought it was a 'Chinese problem'. As a result, the country flew blind.

Inevitably, the virus spread to the States in March and April, and I think that, to avoid the responsibility and embarrassment at home, tried to distract and deflect criticism by blaming China for the pandemic, firstly by calling it the 'Chinese' or 'Wuhan' virus, as if viruses have borders or nationality.

He later claimed, despite overwhelming consensus from scientists, that the virus originated at the Wuhan Institute of Virology. I think it's nonsense, actually, and an attempt to cover up for presiding over a disaster across the US.

The origins and development of viruses are difficult to determine, and it's a job for scientists. French scientists stated that the first cases in France began in November or December, in line with China's cases, and Italy believes their cases originated in Germany around January or February, indicating it dates back further than most are talking about, possibly in a lesser, asymptomatic form or with milder symptoms, but became more aggressive after developing in Wuhan.

I read the other day that there were 14 variants of the disease, with the East Coast in the US having a more virulent strain than the West Coast.

So I think this is not about science, but about politics, and I'm concerned about what's emanating from the White House. The deterioration in relations between the US and China were at the behest of Washington, with a sharp departure from Sino-US relations underpinned since 1972, where China was to be regarded as a competitor, but is now seen as a threat.

In regards to COVID-19, the pandemic has moved to the centre of the argument, taking precedence over the US-China trade war. Trump mentioned on Thursday evening that COVID-19 was a greater threat to American life than Pearl Harbour or 9/11. He doesn't say that China is an enemy and is responsible, but accuses Beijing of failing to stop the disease.

This is very disturbing because it's poisoning the relationship with China. COVID-19 is going to be a key moment in history, namely in the last few decades, because of China's economic rise to power. But with COVID-19, the argument has shifted from a narrow question of economics to a question of governance, which the West has long regarded as its area of advantage. But the global response to the pandemic will shift the argument in favour of Beijing.

Sputnik: What do you believe is the future of Sino-British ties after the pandemic? How have relations change from previous administrations and will London follow Washington or follow an independent strategy?

Martin Jacques: During the [former Prime Minister] David Cameron and [Chancellor of the Excheqers] George Osborne government, Britain pursued a relatively cooperative and strong economic relationship. They welcomed Chinese investment, nuclear power, Huawei as an important investor, and an expanding range of cooperation.

Then, after the Cameron government fell and [Former Prime Minister] Theresa May was elected, the relationship didn't deteriorate, but went into a period of stagnation. Nothing was reversed but the growth in friendship was not resumed, either.

PM Boris Johnson has continued his predecessor's position, now with the important question of Huawei's 5G partnership, who was allowed 30 percent of the market. But there is a backlash mainly in the Conservative Party which wants to review Sino-UK ties, or even roll them back altogether or perceive China as a threat, obviously influenced by Trump's rise.

Relations have definitely cooled and suspicions deepened due to China growing stronger, moving from a fast-growing economy but not rivalling Western levels of technology, to China becoming a technological power and innovator, and sections of the UK have attempted to pigeonhole Beijing as a competitor or threat.

World
Chinese Ambassador Slams British MPs For 'Cold War Mindset', Urges 5-Point Post-COVID-19 Strategy
In the long run, this is a totally unsustainable position because Beijing is on the rise and the second-largest global economy, and is a leader in numerous technologies, and these ties will be essential.

It's not like in the former Soviet Union which was never strong in these areas save for the military, and China is and will continue to be a major economic success.

You can't just refuse to deal with a country like that, especially without "cutting your nose to spite your face". You may be able to do that to lesser countries not seen as competitors, but not to China, who has so much of the technology we are going to need.

Regarding COVID-19, a lot of essential supplies are made in China and no longer in the UK and other countries. So such a position is unsustainable in the long term, but in the short term could become more influential.

Europe has also been affected by the deterioration in Sino-US relations, and Europeans by and large don't follow or even like President Trump, but nevertheless feels challenged by China's rise and are concerned about how to 'defend' or 'protect' itself from Beijing, for example, the challenge the Belt and Road Initiative poses to the European Union.

I believe if we had the Cameron-Osborne approach to Sino-British ties, I may be more optimistic. But under the current position, I think they will worsen over a long time, namely in the context of COVID-19.

Many countries will go through a very painful period, much more than after the 2010 financial crisis, with a lot of dissatisfaction and people looking for someone to blame, who will blame Beijing in the Trump manner.

A recent poll revealed that roughly between two-thirds and three-fourths of the US population feel negative about China, pointing to a presidential election in November where Trump will play the anti-China card big time.