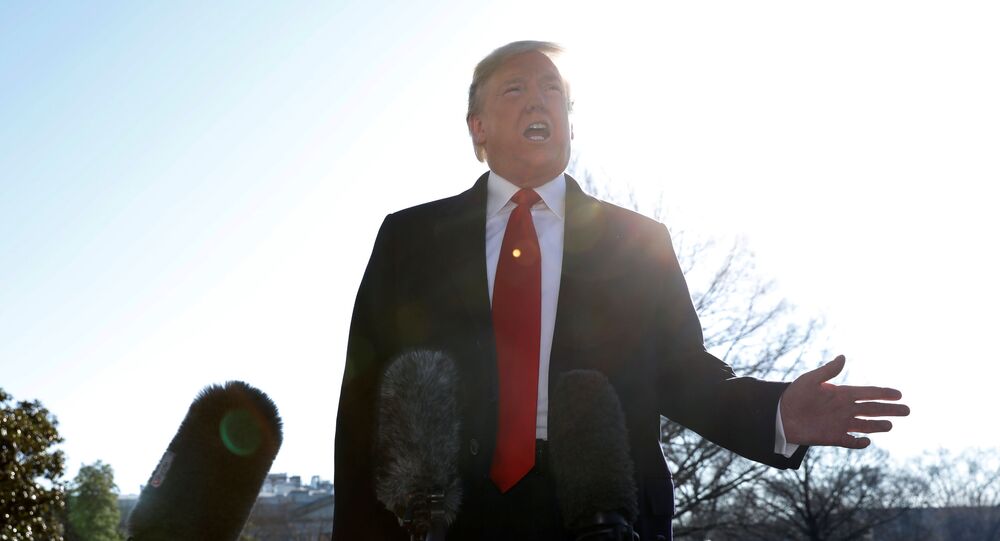 On Wednesday President Donald Trump announced that Vice President Mike Pence would head the coronavirus response, rejecting an earlier assessment by US health officials that the novel virus would inevitably spread more broadly in the United States.

Ahead of a crucial Democratic primary in South Carolina, US President Donald Trump slammed the Democrats for politicising the coronavirus outbreak to create a “new hoax” after the impeachment proceedings they spearheaded against him earlier, as he took another jab at their immigration policies as presenting a “threat” to the health of Americans.

“Now the Democrats are politicising the coronavirus… They have no clue, they can't even count their votes in Iowa.This is their new hoax,” said Trump.

In a speech at a campaign rally in North Charleston, Trump launched a counter-attack at the criticism recently lobbed at his administration’s handling of the response to the COVID-19 outbreak.

“We are doing everything in our power to keep the infection and those carrying the infection from entering the country. We have no choice… Whether it’s the virus that we’re talking about, or the many other public health threats, the Democrat policy of open borders is a direct threat to the health and well-being of all Americans,” Trump said at the Coliseum and Performing Arts Center.

Earlier, the administration became the target of significant criticism for its handling of the epidemic outbreak, with the Democrats emphasising cuts at the Centers for Disease Control (CDC) under Trump’s leadership, which started in 2018, as the White House focused on curbing funding to Obama-era disease security programmes.

US Senator and Democratic presidential candidate Bernie Sanders on Thursday accused the Trump administration of releasing misleading and unscientific information about controlling COVID-19, as he urged Trump to sign the full $8.5 billion in coronavirus response funding proposed by Congress.

On Thursday, President Donald Trump expressed optimism that the novel coronavirus, which the World Health Organisation says has "pandemic potential", would eventually be contained and eliminated in the United States.

The President added that "from our shores, you know, it could get worse before it gets better. Could maybe go away. We'll see what happens. Nobody really knows".

© REUTERS / Carlos Barria
US Vice President Mike Pence speaks during a tour of the "secretary's operation center" following a coronavirus task force meeting at the Department of Health and Human Services (HHS) in Washington, US, 27 February 2020.

As he extolled his administration's efforts in response to the outbreak, Trump said:

"We have done an incredible job. We're going to continue.”

Earlier, on Wednesday, the US President announced that Vice President Mike Pence would be the administration’s point person on the response to the outbreak.

Subsequently, Pence said he had enlisted the help of Dr. Deborah L Birx, who runs the country’s efforts to fight HIV and AIDS, and Alex Azar, the Health and Human Services Secretary.

The current news comes as The Washington Post reported Friday that California had discovered another person with coronavirus who may have received the disease via community transmission, after a similar case in Oregon and the first such case diagnosed in northern California on Wednesday, 26 February.

The Centers for Disease Control and Prevention had begun sending out new testing guidance to health care workers in the wake of the developments, as earlier in the outbreak, CDC guidance to US doctors was that a patient had to have a travel history to China or be a close contact of someone who had been there before being tested.

© REUTERS / Aly Song
A man wearing a protective mask is seen inside the Shanghai Stock Exchange building, as the country is hit by a new coronavirus outbreak, at the Pudong financial district in Shanghai, China February 28, 2020. REUTERS/Aly Song

According to Worldometers, as of 29 February, 2020 at 06:40 GMT, there have been 66 confirmed cases of patients infected with COVID-19 in the United States.

An outbreak caused by the 2019 novel coronavirus (SARS-CoV-2) began in Wuhan, Hubei Province, China in December 2019, and has since spread throughout China and to other countries and territories, including the United States. According to WHO, 53 countries have been affected so far.