Democracy Dies in the Wallet: WaPo to Cash In with $15 Mueller Report Book 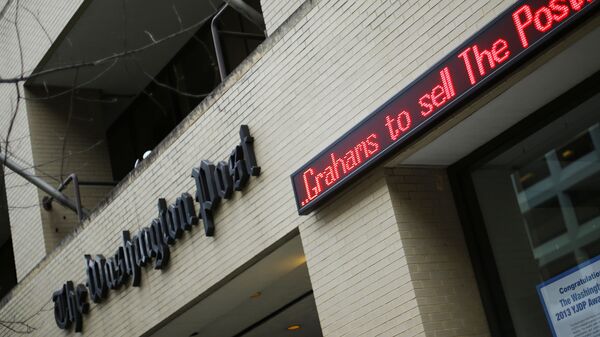 As if we haven’t had enough book cash-ins from the Trump presidency, now the Washington Post is gearing up to sell a $15 copy of the Mueller report - which hasn’t even been released yet - complete with “exclusive analysis” that it bills as “the most complete and authoritative available.”

House Democrats Will Expand Russiagate in 2019 to Push Trump Toward War
It was only Wednesday that the House Judiciary Committee voted to subpoena the Department of Justice for a full, unredacted copy of special counsel Robert Mueller's report, which he submitted last week. The nearly two-year investigation into alleged collusion between the Trump campaign and the Russian government to get the Republican candidate elected in 2016 was compiled into a roughly 400-page report. Attorney General William Barr then supplied Congress with a four-page summary of the report and his intended actions, noting that while Mueller's findings cleared Trump of collusion, they might not clear him of some other legal stumbling blocks, such as obstruction of justice.

But now it's Friday, a whole two days have passed, and the Washington Post is all set to sell you a copy of that full, unredacted report, along with their writers' own commentary, for a mere $15!

Why stop beating a dead horse if it's bleeding money? WaPo/Amazon looking to cash in on their reprint of the Mueller report American taxpayers have paid for.
The Mueller Report by The Washington Post https://t.co/5zIqlMcjn4 via @amazon

​The book is expected as early as April 30, and pre-sales are doing well, already hitting the top spot in Amazon's "New Release in Espionage True Accounts" section.

However, WaPo isn't the only paper cashing in on the Mueller report's potential paperback sales. Skyhorse Publishing is selling it, with an introduction by lawyer Alan Dershowitz, for $12.99, and Melville House will run a stripped-down, report-only paperback for $9.99.

To Melville's credit, in the product description on Amazon, it says, "This is the full text of special counsel Robert Mueller's investigation into Russian interference in the 2016 presidential election. It is the report and nothing but the report, presented as released by the Attorney General of the United States, with no positioning or framing apparatus — such as a celebrity introduction — that would give it bias or impede its clarity."

Seems like they're vagueing somebody with that line. Could it be a certain mainstream newspaper that's basically volunteered its columns as a great bellows on the flames of Russiagate hysteria and anti-Russian xenophobia?

At every opportunity, the Washington Post's editors and writers alike have jumped to amplify a new story buttressing the Russiagate narrative mutually agreed upon by the rest of the mainstream media. From recycling old, outdated and disproven stories to reading between the lines to find evidence of a Russian presence where there is none, to demonizing any Russian person who turns up in the news as part of the vast conspiracy on which they're reporting in order to save "democracy" from the "darkness."

But, as The Intercept's Glenn Greenwald once put it, "the examples of such debacles when it comes to claims about Russia are too numerous to comprehensively chronicle," so we won't try here; we've already documented a great many examples.

Suffice to say, we think it's quite audacious for a group of journalists, Pulitzer Prize-winning or otherwise, with such a long and distinguished record of misreporting on a Russiagate fiasco they themselves helped to create, to package those opinions in a book as a $15 forward for a report that everybody knows will immediately become downloadable for free the day it's released.

Journalist and author Daniel Lazare told Sputnik on Thursday that that the Mueller report would "probably be more embarrassing to the [New York] Times and the Washington Post when it's finally released than it will be to Trump."

"I think there's a good deal of more meat in there — I suspect there is — that will show the even greater emptiness of the whole anti-Russia crusade than we've been led to believe," he said. We cannot help but agree.