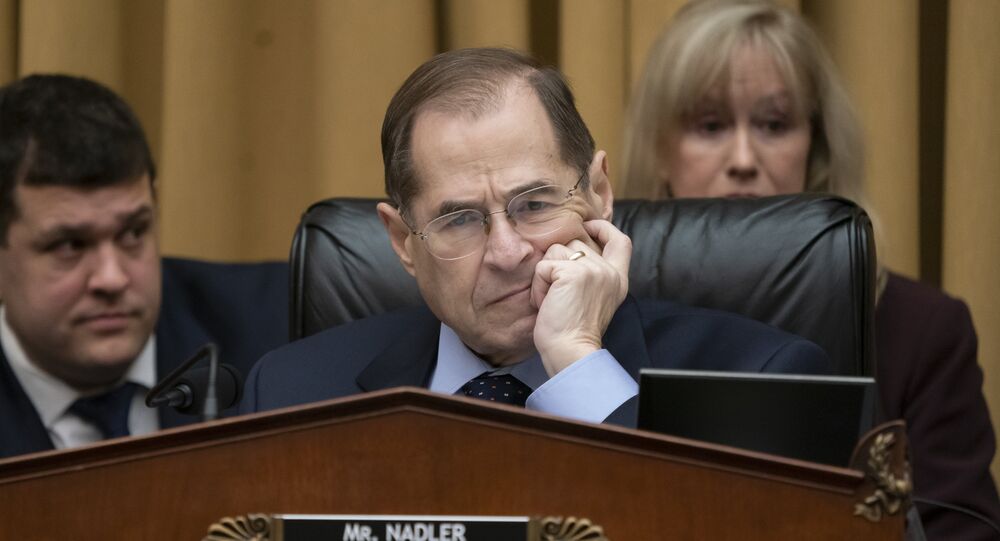 A week after Special Counsel Robert Mueller submitted his much-anticipated Russiagate report to Attorney General William Barr, the Democrats who banked it all on the report vindicating their claims about Russian collusion with the Trump administration have scrambled to face the reality that Mueller didn’t find any such collusion.

Their latest attempt to rewrite the narrative has them blaming Barr for supposedly withholding key information in a redacted version of the report.

Ted Rall, an award-winning editorial cartoonist and columnist whose work is at rall.com, told Radio Sputnik's Loud and Clear Monday that the move was clearly "damage control" by the Democrats.

"These talking heads, especially [Rachel] Maddow, look like idiots," Rall said. "It's one of those things where the mighty have really fallen. She started out with a great reputation before all this, and now she's taken quite a fall. So she's spinning, she's trying to save her career; her ratings have declined precipitously as this all went down, as a lot of her viewers have drifted away. So I think, more than anything else, it's about saying, ‘No no no, we weren't wrong, we were right,' even though they were wrong."

​"They keep moving the goalposts," Rall said. "First they said, ‘Oh, the Mueller probe will definitely show collusion between Trump and Russia in 2016.' Now we're being told, ‘Well, that's just the four-page executive Barr summary, which we can't trust because he's a Trump administration official.' The problem with that is, of course, if there's any meat there, I don't think the Trump administration would be so eager to release the report, which they're going to do in a couple of weeks — and also, if there were any meat there, it would have leaked, we would have known, and Mueller would have recommended charges."

Barr assured Congress on Friday that he would submit a full, albeit redacted, copy of the roughly 400-page Mueller report by mid-April, following his own four-page summary of its points he supplied last week. However, that doesn't seem to be enough for the House Judiciary Committee, which will vote on Wednesday about whether or not to subpoena the DOJ for an unredacted copy as well as Mueller's underlying evidence, the New York Times reported Monday.

"As I have made clear, Congress requires the full and complete special counsel report, without redactions, as well as access to the underlying evidence," committee chair Rep. Jerrold Nadler (D-NY) said in a statement. "The attorney general should reconsider so that we can work together to ensure the maximum transparency of this important report to both Congress and the American people."

However, the ranking Republican on the committee, Georgia Rep. Doug Collins, said in his own statement that the "desperate" Democrats had "escalated from setting arbitrary deadlines to demanding unredacted material that Congress does not, in truth, require and that the law does not allow to be shared outside the Justice Department."

Barr said on Friday that the report he intended to submit would be redacted to protect secret grand jury testimony, classified material and information about continuing federal investigations, the Times noted. He promised a public testimony next month about his handling of the case.

But the Judiciary Committee won't stop there: they'll also vote Wednesday on subpoenaing five other witnesses for other investigations into possible obstruction of justice, abuse of power and corruption by Trump administration officials. The five are Donald F. McGahn II, Steve Bannon, Hope Hicks, Reince Priebus and Annie Donaldson, the Times noted.

The moves are only the latest by House Democrats, who now hold the majority in the chamber, in their attempts to resuscitate the Russiagate investigations after the House Intelligence Committee closed the probe in March 2018, declaring it had found "no evidence of collusion, coordination or conspiracy between the Trump campaign and the Russians."

Intelligence Committee chair Rep. Adam Schiff (D-NY) pledged to re-open the committee's investigation on the campaign trail, and followed through on that promise in February, when the committee sent Mueller's then-still-active investigation the transcripts of 50 interviews with top Trump campaign officials and Trump associates, Sputnik reported.

Schiff also said the renewed Russiagate probe would go "beyond Russia" to include Trump's financial interests and "whether any foreign actor has sought to compromise or holds leverage, financial or otherwise, over Donald Trump, his family, his business or his associates." He also noted, "That pertains to any credible allegations of leverage by the Russians or the Saudis or anyone else."

"They're trying to keep the pressure up on Trump, and I do think to some extent they're saying, ‘Look, there is corruption within the administration, and we were able to expose that, the Mueller investigation did show some of that,'" Rall told hosts Brian Becker and John Kiriakou Monday. "But of course, nobody else thought there wasn't corruption in the Trump administration! It's completely a red herring."

"I think, fundamentally, this is probably going to backfire on them. Earlier, John asked, ‘What's the end-game?' I don't think this is going to work, and I think it's because there's a different psychology between conservatives and liberals. Conservatives who enjoy Fox News, they love that repetition. Rush Limbaugh does the same thing every day, day after day."

"But lots of political experts who study framing and messaging and politics have found that liberals really don't like it. It doesn't work, and I think that's why Maddow lost a big audience here, and may never fully recover because of this. Because with liberals, even corporate Democratic Hillary Clinton-type supporters, they're looking at this and they're thinking, ‘Well, this woman lied to me, and she knew she was lying,' and I think… it's just not smart."

"Money is very, very important in politics, but you also have to get hearts and minds simply by good messaging and being on the right side of the facts, more often than not, in the long run," Rall said. "You can lie in the short run, but in the long run, if your credibility is gone, you're gone. I don't think this is going to work out well for the Democrats."

"Whenever we talk about infotainment, we have to talk about [money]. Going back to 2016, people always questioned… the head of CNN about why his network gave so much attention to Trump's rallies," Rall said. In October 2016, CNN President Jeff Zucker said during a speech at Harvard University that the network focused so much on Trump's campaign because the candidate was a "publicity magnet," and his ad hoc speeches "delivered on big ratings."

Will There Be ANY Accountability for the Main Promoters of RussiaGate?