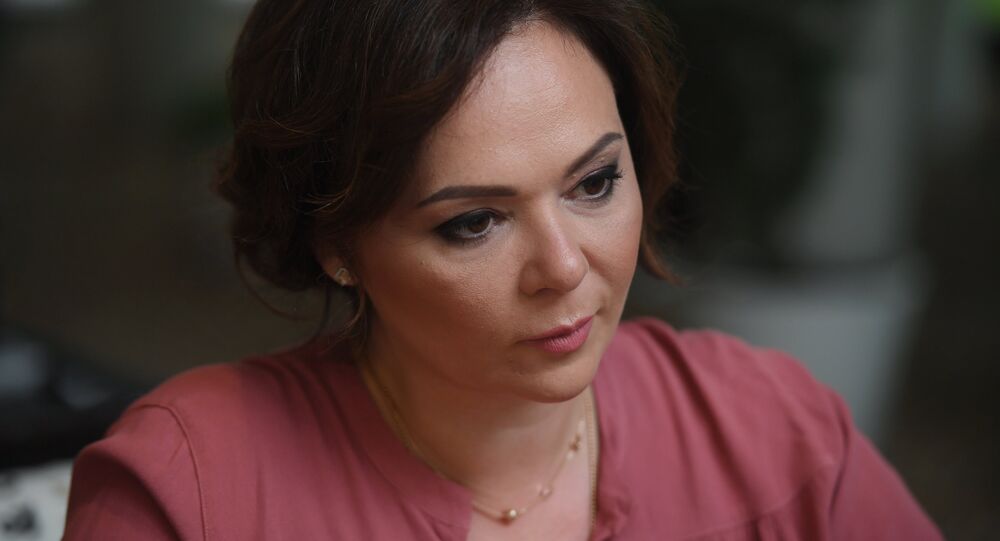 Russian lawyer Natalia Veselnitskaya was indicted Tuesday in a US district court for obstruction of justice. The case is unconnected to the Russiagate investigation, but that hasn’t stopped US media from essentially reporting that it is.

The indictment itself is just a headline-grabber, trying to bring a charge against her for "what lawyers do all the time," Jim Kavanagh, the editor of thepolemicist.net, told Radio Sputnik's Loud and Clear Tuesday. "They help each other formulate positions… There's nothing here except the desire to get headlines."

The origin of the indictment is a 2013 lawsuit brought against Russian real estate firm Prevezon Holdings Ltd. by US prosecutors for an alleged $230 million tax fraud scheme. Veselnitskaya was hired to represent the company in US federal court. While representing Prevezon Holdings, she submitted a document from a Russian prosecutor that Veselnitskaya claimed was an independent finding, AP reported.

Tuesday's unsealed indictment, actually brought last month, claims that this document was an "intentionally misleading declaration" Veselnitskaya had drafted herself.

"Fabricating evidence — submitting false and deceptive declarations to a federal judge — in an attempt to affect the outcome of pending litigation, not only undermines the integrity of the judicial process, but it threatens the ability of our courts to ensure that justice is done," Manhattan US Attorney Geoffrey Bernman said in the indictment.

The civil case was settled in 2017, but Prevezon hasn't paid the negotiated price, AP noted. A federal judge ordered the company to pay the US government $6 million last February.

Among the companies that claimed Prevezon had defrauded them in the 2013 case was Hermitage Capital Management, whose CEO, William Browder, aided the US government's case. Browder is well-known as a champion of sanctions against Russia following the 2009 death of a tax accountant, Sergei Magnitsky, who had represented him in a massive tax fraud case. Magnitsky's death in a Russian prison led to Browder and the US government claiming the Russian government was responsible.

© Sputnik
Connecting the Dots on Bill Browder and Mikhail Khodorkovsky

Interest in Veselnitskaya doesn't end there, though. The Russian lawyer was also part of the infamous meeting hosted by Donald Trump, Jr., that took place in Trump Tower in June 2016, which special counsel Robert Mueller has heavily scrutinized as a key event in alleged collusion between the 2016 presidential campaign of Donald Trump and the Russian government. Veselnitskaya has previously said the meeting focused on the issue of US nationals adopting Russian children and the Magnitsky Act, Sputnik noted.

However, James Margolin, a spokesman for the Manhattan US attorney's office, told AP that the present case against Veselnitskaya did not originate from a referral by Mueller, and the charges are "unrelated to any other investigation."

Radio Sputnik spoke with Kavanagh and Lee Stranahan, co-host of the Radio Sputnik show Fault Lines, about Veselnitskaya and the history of the case.

​Kavanagh noted that "this woman is being charged in an American court for activities representing her client in Russia."

"This is a case that has been settled a year and a half ago, and there's no reason to be bringing these charges. This is what lawyers do all the time: they talk to each other, they help each other formulate positions… There's nothing here except the desire to get headlines."

Kavanagh noted that the core of the indictment stems from leaked, hacked emails between Veselnitskaya and a Russian prosecutor that included suggested edits and discussions about what the prosecutor should include in the statement to the court, which prove that she was actually the one who drafted that documents and not him, as she claimed.

Kavanagh pointed out the highly disingenuous title of the New York Times' article, "Veselnitskaya, Russian in Trump Tower Meeting, Is Charged in Case That Shows Kremlin Ties," which casually suggests a relationship between the Trump Tower meeting and Tuesday's indictment.

"It's really just to generate the idea that there's some kind of groundswell of evidence that's going to prove some kind of collusion with Russia that doesn't exist," Kavanagh said, noting that both the NY Times and the Washington Post "repeat flat-out lies about the situation," including that Sergei Magnitsky was a lawyer working for Browder (he wasn't a lawyer) who exposed fraud (that he was actually a part of).

Stranahan noted that the propaganda and misrepresentation of the situation wasn't just coming from liberals. On Fox News, "the story is being pitched to show that Natalia Veselnitskaya set up [Donald Trump Jr.] and that the Kremlin ties prove that Putin is behind it… In both of these scenarios, the left and the right, Vladimir Putin is the unquestioned evil-doer," the puppetmaster, "and Natalya Veselnitskaya is his pawn who's being used for either this collusion or this frame-up," said Stranahan.

Stranahan told hosts Brian Becker and John Kiriakou that Browder "is at the center of this. He is a proven liar." He noted that Browder's 2015 deposition doesn't match his public story. "The reason they settled this case is that he was going to be forced to testify."

​Stranahan interviewed Veselnitskaya earlier this year, during which she said:

"The fact that my position was taken by Russian law enforcement authorities does not make me the Kremlin's lawyer. The fact alone that I was communicating some information to the general prosecutor's office of the Russian Federation does not make me its lawyer in the least. I am acting as a source of information for Russian law enforcement, and I shared this very information with US authorities as well. I was also willing to share this information with Congress, but I didn't get a chance."

Kavanagh said this was at the heart of Veselnitskaya attending the Trump Tower meeting: "She was naively saying, ‘If I get to the right people, and I'm able to talk to them, I'll show them that Browder's a liar and a fraud.' Of course, that was never going to happen."