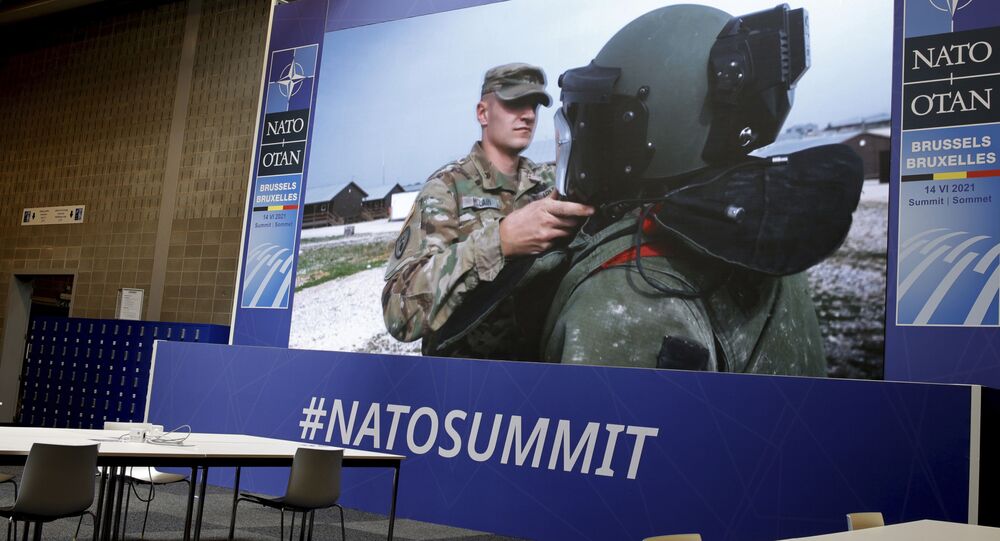 NATO to Review Strategic Concept in Response to Russia, China Challenges, Decree to Be Ready in 2022

This comes after US President Joe Biden said at the G7 summit that the alliance is crucial to American security, which Washington does not view as a "protection racket". Prior to that, G7 leaders discussed efforts to "strengthen and modernize" the alliance.

The North Atlantic Treaty Organization (NATO) will modify its strategic policies regarding Russia and China, and present a related document for the adoption on the alliance's summit in 2022, the White House said on Sunday.

"Allies will agree to revise NATO's Strategic Concept, a framework that will guide the Alliance's approach to the evolving strategic environment, which includes Russia's aggressive policies and actions; challenges posed by the People’s Republic of China to our collective security, prosperity, and values; and transnational threats such as terrorism, cyber threats, and climate change," the White House said in a statement issued ahead of the NATO summit in Brussels on June 14.

The allies within will implement fresh military strategies to ensure high defense levels against "threats" coming from Moscow, and proceed with the monitoring of Russia's activities linked to Ukraine, the White House also said.

"Allies will commit to implementation of new military concepts and strategies that strengthen NATO's deterrence and defense posture to meet threats from Russia and elsewhere," the White House said in a statement published ahead of the alliance's summit in Brussels, due to be held on Monday.

"NATO also continues to monitor the Russian deployments in and around Ukraine," the statement also read.

© AP Photo / Francisco Seco
Protestors wave flags and install a sign on a statue during a demonstration prior to a NATO summit in Brussels, Sunday, June 13, 2021. U.S. President Joe Biden and his NATO counterparts will bid a symbolic farewell to Afghanistan on Monday in their last summit before America winds up its longest "forever war" and the U.S. military pulls out for good.

According to the statement, the new Concept will be ready for adoption at the next year's summit of the alliance.

Russian President Vladimir Putin has repeatedly expressed concerns over NATO's potential expansion closer to Russia's borders, pointing to the need to consider Moscow's reaction to the alliance's military build-up. The latest tensions also concern the termination of the INF Treaty, which prohibited both Russia and the United States from deploying intermediate-range missiles on European soil, and the prospect of Ukraine joining the alliance, though the latter is reportedly not on the agenda, as of now.

Concerning Ukraine, the Russian president praised the intelligence of Ukrainians who oppose their country's NATO membership, noting that they do not want to become cannon fodder or political currency.

Remarkably, since 2014, the US and its allies have intensified reconnaissance activities close to the Russian borders, particularly, over Baltic Sea airspace (near Kaliningrad) and the Black Sea. The Kremlin has also pointed to the hostile rhetoric coming from Kiev, which forces Moscow to react, while at the same time Russia has never been the initiator of sanctions and military build-up at the border.

In late May, the Russian Dense Ministry announced that it will create around 20 new formations and military units in the Western Military District by the end of the year, aimed at ensuring national security in response to the NATO build-up in Eastern Europe.