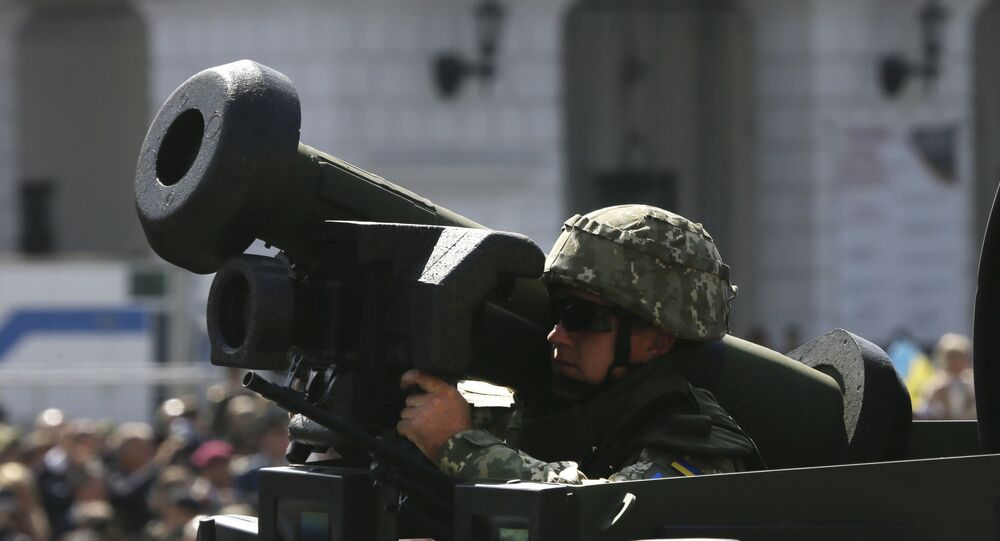 Ahead of an upcoming meeting with Joe Biden in Geneva, Vladimir Putin noted that Russia-US ties are now at their lowest point in years. The tensions between the two nations are building up in various areas, and one of the most problematic issues is the situation in Ukraine - which recently received $150 million in military aid from Washington.

Sputnik discussed the tensions in Ukraine and their role in relations between Russia and the US with Professor Anatol Lieven, a senior fellow at the New America Foundation in Washington, DC and an international politics expert at Georgetown University in Qatar.

Sputnik: The annual Sea Breeze drills, which are focused on the Black Sea area, will involve personnel from a number of NATO countries and are set to take place from 28 June to 10 July. What is the purpose of this show of strength in Ukraine?

Professor Lieven: It's twofold, the first purpose in the view of NATO and the West, to deter Russia from an attack on Ukraine, which they believe or pretend to believe is a possibility. But the second thing is simply to show off NATO, to support the view that NATO is an organisation that actually does things and is good for something. Because otherwise, given NATO's miserable record in Afghanistan and Libya, people might begin to wonder what NATO is actually for.

So, it has to conduct these exercises in order to pretend to look useful.

Sputnik: Russia was heavily criticised for its military activity on its western border yet this was strictly within its borders and Russia did not invite foreign partners to participate in it. Ukraine is not a NATO member, yet we see a large number of foreign powers involved in their military exercises. What's behind this? Why are we seeing such mixed signals coming from the West?

Professor Lieven: Part of it is pure hypocrisy. All countries engage in it. They have different standards for themselves and other people. You may remember that when the Americans by accident shot down an Iranian airliner over the Persian Gulf during the Iran-Iraq war, the Americans never regarded this as a crime and never apologised for it, though they did pay some compensation.

When a Dutch airliner was shot down by accident over Ukraine or over the Donbass - it's treated as a monstrous international crime. When America forces down the plane of the president of Bolivia in order to search it for an American whistleblower, Edward Snowden - all the Europeans go along with this and reject all criticism. When Belarus does this, of course, this is once again a terrible international crime. But Russia has double standards, too, so partly it's just double standards.

But it is also that the Americans and of course, some of the Europeans as well, very much want Ukraine to be a kind of ally and strategic partner. Now, of course, they can't take it into NATO because it's got unsolved territorial disputes. It doesn't remotely qualify in terms of democracy and all these other things. But they want to do everything short of that to suggest that Ukraine is an ally of the West. And this exercise is also intended to demonstrate that.

Many of us would argue that Ukraine is not important for the West, that this is something that the West has found itself trapped into, by its strategy after the end of the Cold War, by its rhetoric of Europe, whole and free and so forth. But the problem is that... Two things. First is, in general, the desire for universal global hegemony has become hardwired into the American establishment since the end of the Cold War. And Ukraine is part of that plan. But also it's a question of US prestige and domestic politics as well.

Once America has committed its prestige to a certain project, it is appallingly difficult for it to change course, partly because of the tremendous power held in America by the US Congress, which remember, controls the money, controls sanctions, and everything else. The US Congress is, from a foreign policy point of view, totally irresponsible.

It has no idea of what goes on in the rest of the world. It's only concerned with domestic image. It basically does what it likes and then administrations have to pick up the pieces. But now you see that the American political establishment has committed itself to Ukraine as part of this project of building American power and American-led democracy, even though there are excellent reasons why America should not give up the project completely, but obviously abandon the idea of NATO membership and seek compromise with Russia. I have a big paper coming out this week on the need for a negotiated compromise in the Donbass.

And the American political system, it seems, can't do it. It's nailed to this policy, just as it's nailed to a policy of overthrowing the Syrian state. An absolute absurdity, of course, it's nailed to bitter hostility to Iran, although in many ways Iran has done less damage to American interests than Saudi Arabia has, let alone Israel. It's a sort of zombie policy, it's walking around pretending to be alive because nobody in Washington has the courage to kill it off.
Sputnik: The US is now paying a lot of attention to Ukraine. What do both countries stand to gain from this close cooperation?

Professor Lieven: America, as I say, hopes for the extension of its global hegemony and the complete destruction of Russian power beyond Russia's borders in the former Soviet Union. A lot of people in America do genuinely believe in this American mission to spread democracy and freedom to the whole of the world, however deeply, of course, hypocritical and inconsistent this is in practice. They believe in it. So does that as well.

And of course, from Ukraine's point of view, they or at least the Ukrainians who support this policy, which, of course, is by no means all of them, want to make themselves totally independent of Russia, even if that implies being dependent on the United States, partly because this will allow them to carry out a programme of cultural and linguistic Ukrainianisation within Ukraine, eliminate the Russian language, eliminate Russian culture, and basically implement their vision, their ethnic nationalist vision for Ukraine, which they can only do under American protection.

And of course, ultimately, they hope that they will be able to join the European Union and become a prosperous Western state. Although, given the failure of reform in Ukraine so far that's an impossibly distant prospect. And EU membership, like NATO membership, will depend on a solution to the Donbass conflict and the Crimean dispute, which, of course, the Ukrainians refuse to engage in.

So, they're in a sort of bind. They won't either seek a compromise with Russia over these issues or give up these territories in order to try to have a better chance of joining the West.