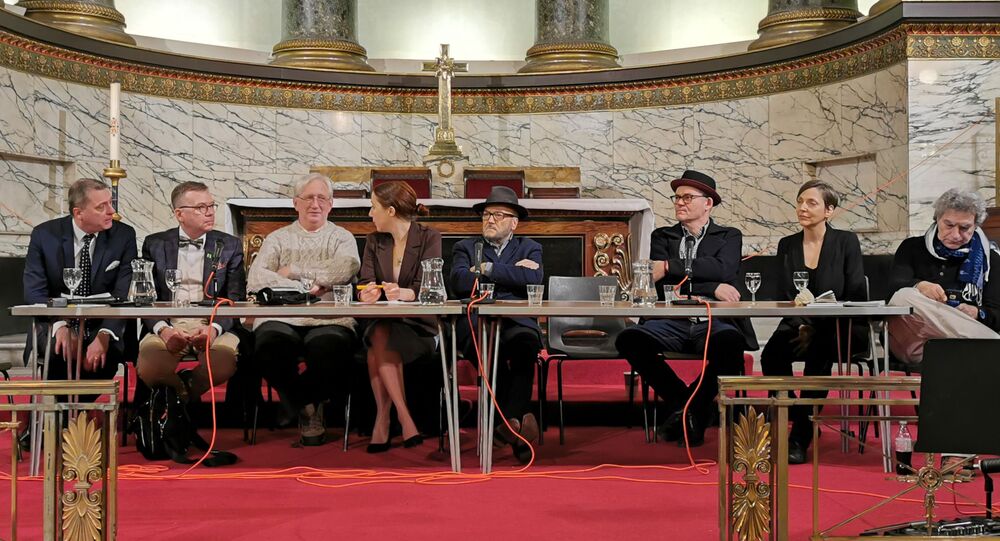 Leading faces in the alternative media scene held vital discussions on the role of imperialism in the case of the detained WikiLeaks founder, with voices across the political spectrum weighing in on the week-long hearing and its greater implications on the future of whistleblowing and press freedom.

Hundreds of activists from across Britain and beyond attended the 'Imperialism On Trial - Free Julian Assange' rally at St Pancras Church in London on late Tuesday to hear  speakers discuss the role of imperialism in the trial against the WikiLeaks founder.

Key speeches later segued into an impromptu session of CrossTalk, with Mr Lavelle moderating discussions on imperialism and the need for whistleblowers and journalists to fight Julian Assange's extradition to the United States. During the panel discussion, major analyses on the role of media in class warfare were given by Mrs Brar and Mr Lauria, among others.

The rally was held amid many global demonstrations in recent weeks, namely in Ireland, Germany, the United States, Australia and France, where activists voiced their support for the Australian activist.

The events took place as a crucial week-long hearing began on Monday for the WikiLeaks founder at Belmarsh Magistrate's Court, sitting at Woolwich Crown Court.

If extradited to the US, Mr Assange could face up to 175 years on 17 charges under the 1917 Espionage Act for his role in publishing revelations from whistleblower Chelsea Manning and Edward Snowden, among others.

Craig Murray began by slamming the Assange trial as a "sham of justice", stating that mainstream media reporters had failed to cover statements given by the defence team.

According to courts, questions on whether Julian's alleged collusion with whistleblower Chelsea Manning were found 'immaterial' as it was 'criminal' to hold classified information under the Official Secrets Act, Murray said, adding that under the US-UK Extradition Treaty, offenders could not be extradited for political offences.

Mr Murray explained "gross and vile abuses of due process", including Assange being handcuffed 11 times and strip searched twice on Monday, with police taking court documents, including "privileged communication" with lawyers, among others.

Alexander Mercouris explained how US authorities were attempting to extradite Assange after being "embarrased" by the Iraq and Afghanistan war logs released by WikiLeaks.

UN special rapporteur on torture, Nils Melzer, had concluded that Assange had been mistreated via "cruel and unusual punishment" during his detention, significantly impacting his health, Mr Mercouris stated.

He also slammed the trial as a "political case" and urged audiences not to forget about Manning, who also suffered from similar abuses in due process after refusing to testify against WikiLeaks.

Speaking on experiences with past dictatorship in Greece, he added: "[Manning] is trying to be coerced into giving evidence. That is an outrageous thing. That is something that happens in all brutal authoritarian societies.

Western corporate media remained "silent" on cases such as RIA Novosti Ukraine's Kirill Vyshinsky, who was detained for over 400 days in Kyiv for articles published in 2014, none of which he had authored.

There were clear parallels between both the Vyshinsky and Assange cases as both were "absurd" and without "legal basis for upholding them", she added.

Employees at Sputnik's Estonian branch were threatened with a five-year prison sentence for continuing work with the media agency in early January, she noted, citing the agency's non-inclusion in EU sanctions lists.

Speaking on the recent Western media blackout over the liberation of Aleppo's countryside, she concluded: "If you were watching Syrian social media channels, Syrian, Russian and independent media, you would have seen Syrians celebrating the fact that, for the first time since the war [began], they were truly free of terrorism.

Mr Lavelle gave an empassioned speech on Assange, stating that the journalist was a "world historic individual" that helped teach the public that "we're not crazy".

Revelations via WikiLeaks helped the general public "connect the dots" in numerous US crimes in Iraq and Afghanistan, Mr Lavelle said, adding that people were living in a world of "omission".

Mr Assange had also exposed the "fraud" of Western mainstream media, he added, citing numerous "anonymous sources" in the US intelligence community.

Mr Lavelle said: "We live in a media age of not just propaganda, not just fake news, but omission. They wipe you away [and] disappear you. This is what they will continue to do, and they'll do it in broad daylight.

He concluded: "In the age of Twitter egoism and fame, and nihilism... Julian Assange and WikiLeaks is antithetical to all of that, because [they] are authentic.

Mr Galloway began by drawing parallels between his experiences whilst detained in Egypt under former President Hosni Mubarak and Assange's detention in the UK.

Rather than receiving the Nobel Peace Prize in Oslo, Assange was instead being strip searched and "held in five different cells in one day", as well as being handcuffed eleven times, Galloway told the audience.

"This is an obscenity in a country that pretends to believe in the rule of law and justice", Galloway said.

Members of the Central Intelligence Agency were "watching his every move" at the Ecuadorian embassy in London, including all meetings Assange held with his legal team"in brazen defiance of the rules of justice", he added.

He said: "No trial can take place when it's been corrupted from the very beginning. The man that blew the whistle on the war crimes sits in Belmarsh, and the war criminals are on the BBC and ITV making [millions] of pounds. The criminals have made it a crime to report on the crimes that they commit.