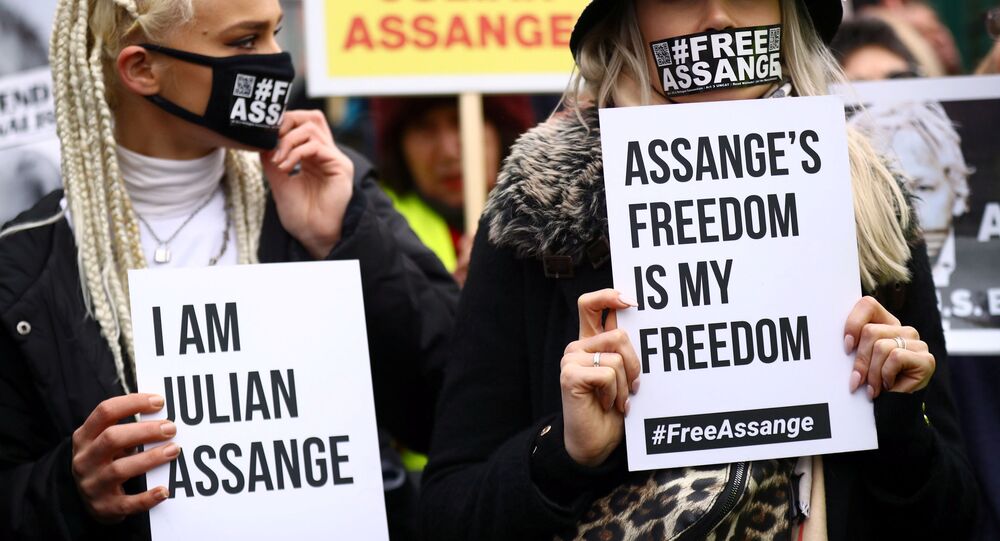 Day two of Julian Assange’s extradition hearing kicked off in London on Tuesday, and despite the defense team raising a number of issues concerning the WikiLeaks co-founder’s mental health and possible suicide risk, the politics surrounding the case present a bleak outlook for Assange, who faces up to 175 years in prison if sent to the US.

Sputnik news analyst and producer Walter Smolarek joined Radio Sputnik’s Loud and Clear on Tuesday via phone from the Woolwich Crown Court in London to relay what he has seen at the trial and provide insight into the scenes both inside the courthouse with Assange and at protests immediately outside the building.

“Julian Assange has been treated terribly throughout this whole process,” Smolarek told hosts Brian Becker and John Kiriakou, in reference to the treatment to which he has been subjected over the past two days alone.

Human rights activist and former British Ambassador to Uzbekistan Craig Murray detailed in a Tuesday article on his website that Assange was “confined at the back of the court behind a bulletproof glass screen” and expressed “several times during the proceedings that this made it very difficult for him to see and hear the proceedings.” When this problem was raised to Judge Vanessa Baraitser, she contended that the noise from the demonstrators outside, rather than the box, was the issue.

Smolarek said that in addition to being forced to stand throughout the trial in the glass box, Assange was also “badly harassed by prison authorities inside of Belmarsh Prison last night.” He explained that Assange’s court documents were seized by prison authorities, and the WikiLeaks co-founder was reportedly moved around between rooms in an attempt “to harass him” and “make him incapable of truly defending himself in court.”

These conditions, along with Assange being subjected to strip searches, were noted to the judge during the Tuesday trial. However, the magistrate said that the conduct of the prison authorities is not in the court’s purview, according to Smolarek.

“This is an unbelievable abuse of a detainee - somebody who should have the presumption of innocence - but obviously that’s not being followed in this case,” he said.

Murray himself argued that one is “already considered guilty and in jail on arrival” in Woolwich Crown Court - host of Belmarsh Magistrate’s Court - and compared the relationship between the courthouse and prison to that between Guantanamo Bay and the US Department of Justice.

Sputnik reported that the defense argued that it would be “unjust and oppressive” to have Assange extradited to the US, as he is at a “high risk of suicide.” Additionally, Assange’s lawyer, Edward Fitzgerald, claimed that his client’s prosecution in the US is being pursued according to “ulterior political motives and not in good faith.”

In an interview with “Going Underground” on RT, UN Special Rapporteur on Torture Nils Melzer echoed this sentiment, saying that there is “no chance” Assange will receive a fair trial in the US. He highlighted that the issue of the WikiLeaks co-founder’s extradition not only has to do with Assange, but also the “battle over press freedom,” the rule of law and even democracy.

'There’s going to be nothing else than a show trial in the US...it’s not just about Julian Assange, this really is a battle over...democracy'

“It’s definitely true that Julian Assange is being psychologically abused and tortured, according to Nils Melzer … I think it’s perfectly reasonable for his defense attorneys to say, ‘Look, you’re driving this guy to suicide. You’re degrading his mental state to such an extent that he may in fact commit suicide,’” Smolarek asserted.

Earlier this month, 117 doctors from 18 countries called for an “end to the psychological torture” of Assange in a joint letter published in The Lancet.

“Should Assange die in a UK prison, as the UN Special Rapporteur on Torture has warned, he will effectively have been tortured to death,” the open letter argued.

In addition to the support of physicians and psychologists worldwide, Assange was also backed by protesters who assembled outside and near the courthouse. Smolarek, who got a chance to speak with a number of demonstrators, said that the common theme in their message centered around the fact that information obtained from WikiLeaks “was invaluable to the public interest” and that “this is an example of what journalism should be.”

“This is seen as an existential battle over whether or not it will be possible to have a truly adversarial press - a press that seeks to hold the rich and powerful accountable,” he concluded.