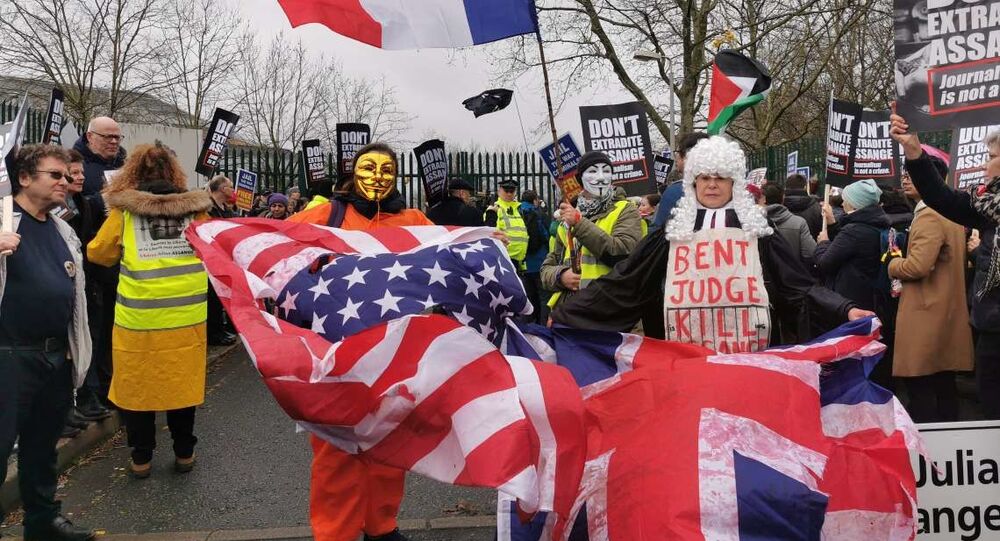 The bombshell admission was revealed at the initial hearing on a potential extradition of the detained WikiLeaks activist to the United States amid numerous protests outside the courthouse and across the world.

No physical harm had occurred to any individuals as a result of documents published by Wikileaks, courts heard on Monday.

The statement was made by US officials during the extradition trial for WikiLeaks founder Julian Assange at Woolwich Crown Court in London, near HM Belmarsh Prison.

But there may be a 'risk' of harm despite none occurring due to the leaks, James Lewis QC told courts.

Speaking on the news, a spokesperson from the Don't Extradite Assange campaign said that the US government had made the "flimsy" claim that "WikiLeaks material was read by enemies of the United States".

WikiLeaks Editor in Chief @khrafnsson "Why on earth are we having journalism on trial here in court, it's outrageous!" pic.twitter.com/EGja0EL7UT

​But similar statements could be true of "any story critical of government", namely of "material revealed by a whistleblower", the spokesperson said.

The spokesperson added that WikiLeaks had "repeatedly revealed war crimes" committed by the US government which had caused a 'risk' of harm, but the actual "maiming and killing" of innocent civilians.

US officials also accused the Australian journalist of publishing unredacted material, which WikiLeaks had sharply and repeatedly denied in prior statements.

Commenting on the revelation, Wikileaks ambassador Joseph Farrel said outside the courtroom that there was both a "flat contradiction" and "repeat of trial".

Mr Farrel said: "It's a flat contradiction because they say they don't want to prosecute for press freedom reasons because of what Julian has published.

Despite accusing Mr Assange for alleged 'harm', no harm had been caused, Mr Farrel added.

He concluded: "We've seen this ten years ago in the [Chelsea Manning] trial. It was said under oath, and this is where we are

News of the revelations come as mass demonstrations take place across the world on Monday, including Sydney, New York City, Munich and many others, in solidarity with the rallies outside Woolwich Crown Court.

​The WikiLeaks founder was forcefully detained from the Ecuadorian embassy in Knightsbridge, London in April last year after a seven-year long asylum stay at the facility from 2012 to 2019. Ecuadorian officials under the Lenin Moreno administration revoked his aslylum status, leading to the arrest.

Assange was forced to serve 50 weeks for breaching bail conditions and a potential extradition to the United States, where could face up to 175 years in prison for his work in publishing information detailing war crimes committed in Iraq and Afghanistan by US military personnel.

An initial court hearing is taking place on Monday at Woolwich Crown Court, which will last a week, with the second hearing set to take place on 18 May for a further week.