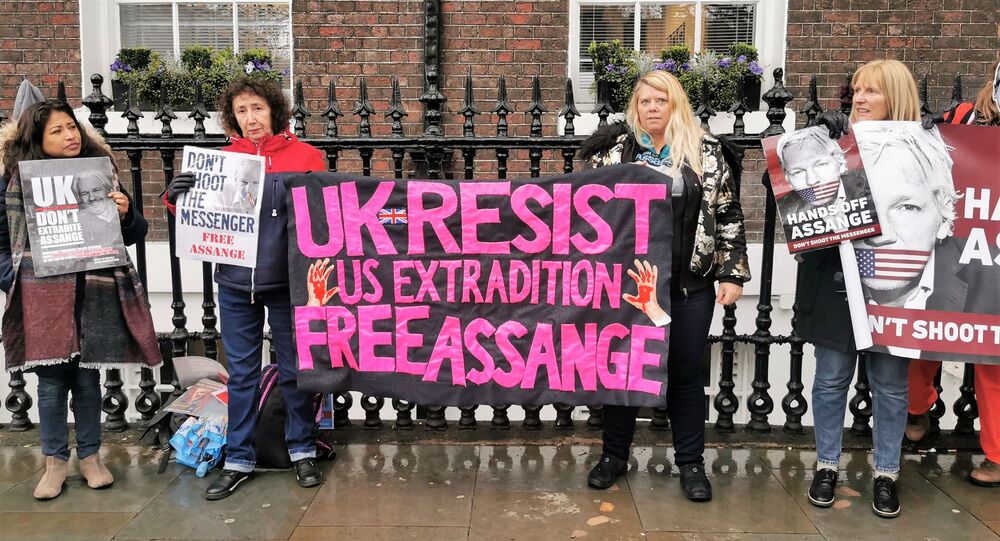 Julian Assange is our collective conscience, our cause of speaking truth to power. Since the establishment of WikiLeaks in 2006 Julian Assange has performed an essential role in exposing the lies and dark crimes of the rich and powerful that normally operate above the law and beyond reproach.

For performing that role he has been the victim of a vile and vituperative campaign of lies, distortions and slanders. The allegations of rape and sexual assault which were so enthusiastically highlighted and spread across the world by the billionaire controlled mainstream media were deliberately designed to undermine Assange’s credibility and reputation as a precursor for the US and UK authorities to justify aggressive pursuit of the man as a loathsome criminal who deserved to be taken down. Many people were deceived by the lies.

Assange Was Targeted For Character Assassination by the Powerful

The world was led to believe that Assange should face extradition to Sweden to face the serious charges of rape which were levelled against him. Any human being recognises that crime as amongst the most odious and atrocious. Assange pleaded his innocence of any such deplorable action but his words were dismissed and drowned out by the clamour from within the powerful mainstream media beast. Assange explained it was a cruel ruse to have him extradited to Sweden on behalf of the US in order for them to arrest him on Swedish soil and transport him to America to face an impossibly rigged trial for charges of espionage carrying a sentence of 175 years in prison. Assange had embarrassed America through exposing their war crimes and they wanted to shut him up and exact revenge.

In 2010 Assange leaked thousands of US Army classified documents which exposed unlawful killings in Iraq, coordinated torture in Guantanamo Bay detention centre and multiple war crimes against humanity which rendered US demands on other nations to observe international laws as nothing less than pathetic hypocrisy. The world’s self-appointed policeman was guilty of the crimes it alleged against others. It was politically guilty of both chasing with the hounds while also running with the foxes.

Assange Leaks Exposed Lies about US in Iraq and Afghanistan

The lies told to their own people and the rest of the world to justify bloody and brutal bombings and/or invasions and fermenting of illegal coups in places like Vietnam, Cambodia, Chile, El Salvador, Nicaragua, Grenada, Libya and many others were eventually exposed years later on the back of often rare and courageous investigative journalism but here in irrefutable documentary and video form was evidence of US criminality and monstrous lies in relation to the invasion of Iraq, Afghanistan and Libya. Julian Assange performed a service to the world and did what real journalists should do. He exposed the deceit, lies and crimes of the powerful. For that he was targeted for severe character assassination and imprisonment. The rape charge was a lie introduced to further that targeting campaign.

Reject the hired liars and repugnant hyenas that pollute the mainstream press and broadcasting outlets with their puerile fabrications and read reputable investigative journalists like John Pilger:

“That Assange has been right all along, and getting him to Sweden was a fraud to cover an American plan to “render” him, is finally becoming clear to many who swallowed the incessant scuttlebutt of character assassination. “I speak fluent Swedish and was able to read all the original documents,” Nils Melzer, the United Nations Rapporteur on Torture, said recently, “I could hardly believe my eyes. According to the testimony of the woman in question, a rape had never taken place at all. And not only that: the woman’s testimony was later changed by the Stockholm Police without her involvement in order to somehow make it sound like a possible rape. I have all the documents in my possession, the emails, the text messages”.

Rape Allegations against Assange Were Fabricated

Ask yourself why that evidence which completely debunks the rape charges against Julian Assange has never been highlighted and reported in the mainstream media? The United Nations Rapporteur who has accused the UK Government of torture for the way Assange has been held in solitary confinement in the high security Belmarsh prison has the evidence which illustrates how cruelly Assange has been fitted up but it is not considered newsworthy.

How many of you were aware that Democratic Presidential nominee in 2016, Hilary Clinton, was made fully aware of the role Saudi Arabia and Qatar were playing in funding the murderous and barbaric Jihadists ISIS BEFORE she accepted millions in donations from those same partners in terror to her Clinton Foundation?

That she, while US Secretary of State in the Obama Administration, approved the world’s biggest arms deal to Saudi Arabia despite her knowledge of that regime’s role in sponsoring the terror group ISIS?

Hilary Clinton, promoted by the mainstream media as a Liberal luvvie and feminist icon and given platform after platform to publicly attack Julian Assange, doubled US arms sales to the tyrannical theocracy and approved an $80 billion arms deal despite knowledge of their support for terrorism.

Assange leaked the emails which proved Bernie Sanders was cheated out of the Democratic nomination in 2016 to make way for Clinton. She was also exposed as the principal cheerleader in the illegal and unjustified bombing and invasion of Libya which claimed in excess of 40,000 lives and unleashed a living hell of displacement, torture, slavery and malnutrition across a previously successful and flourishing country. She literally cheered the brutal and illegal murder by sodomisation of Libyan leader Gadhafi. Thousands of women and girls were condemned to life as refugees and sold as sex slaves in the broken country created by ‘feminist’ Hilary Clinton.

No wonder the Democratic Party elites wanted Hilary as their Presidential nominee and not Bernie Sanders. While Clinton cosies up to reprehensible regimes like Saudi Arabia and arranges arms deals and accepts donations dripping with the blood of war crime victims in Yemen and ISIS victims in Libya and Syria Bernie calls Saudi Arabia out as “murderous thugs”:

"For years, we have loved Saudi Arabia - our wonderful ally. The only problem is, the people who run that country are murderous thugs," Sanders said on Tuesday.

Julian Assange exposed Hilary Clinton as the charlatan she is. He exposed the Afghan and Iraq logs which contained scores of incidents proving the US had committed multiple war crimes. There was the helicopter gunship incident which resulted in twelve men being mown down in a Baghdad street. The soldiers claimed they had come under gun fire from the men. The secret video Assange leaked showed a group of unarmed civilians, including two Iraqis working for the Reuters news agency, shot in cold blood. It was a war crime plain and simple.

For exposing American government lies and war crimes Assange faces an extradition hearing on Monday 24th February in Woolwich Crown Court in London. He faces an extradition hearing despite having committed no crime. Julian Assange is a modern day journalistic hero, not a criminal. Hopefully thousands will attend the Free Julian Assange demonstration in London this Saturday. Thousands more should come to the court on Monday and stand in solidarity with a man who has sought to speak truth to power, to expose the dark lies and crimes of the rich and powerful, particularly the United States of America.

Julian Assange must not be extradited, he should be honoured, lauded and thanked for doing a service to ordinary people across the globe. If you value truth you must stand up for and support Julian Assange. I give the last word to the journalistic colossus and epitome of truth, courage and integrity, John Pilger:

“WikiLeaks has informed us how illegal wars are fabricated, how governments are overthrown and violence is used in our name, how we are spied upon through our phones and screens. The true lies of presidents, ambassadors, political candidates, generals, proxies, political fraudsters have been exposed. One by one, these would-be emperors have realised they have no clothes.

It has been an unprecedented public service; above all, it is authentic journalism, whose value can be judged by the degree of apoplexy of the corrupt and their apologists”