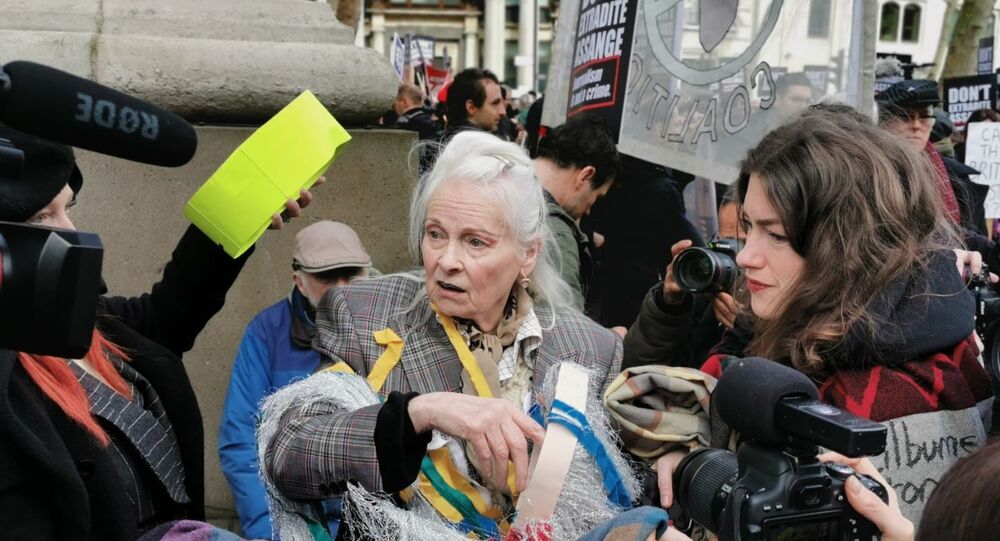 Protesters have been gathering in London to support WikiLeaks founder Julian Assange on the eve of the first hearings into his possible extradition to the United States to be held at Woolwich Crown Court.

Joining the demonstrators expressing their support for Julian Assange in London was British fashion designer and businesswoman Dame Vivienne Westwood, who said Julian Assange case was the most important in human history, marking the difference between democracy and totalitarianism.

Regarding the hearings, set to start on Monday, Westwood expressed the hope that people were aware that if Julian Assange goes, “justice goes”, and that public opinion was with the whistleblower.

However, the businesswoman voiced concerns that UK Prime Minister Boris Johnson might “bluff his way out of a decision” and the extradition result would be a “disaster”.

​Referring to the charges levelled against the whistleblower, Westwood branded the case a miscarriage of justice, claiming Assange has been set up.

If they couldn’t get him on that one (publishing evidence of US war crimes) they would do it through the back door with other charges, insisted the businesswoman, saying:

“England and Sweden kept Assange trapped for nine years while they were f***ing about with habeas corpus to hold him for America”. Now America has taken nine years to get their case together with all these false charges.”

Flamboyant Westwood, a long-standing supporter of Assange, went on:

“It’s so totalitarian. America is already totalitarian… Politically, economically, and legally… If Julian goes down, it’s the end of justice. And all innocent people can just be taken out with no objection because America will have control, and the press will be scared.”

Regarding the relationship between the US and the UK, and whether America just calls all the shots, the British designer emphatically underscored:

“The whole world is the puppet to America, doing what America tells them to do.”

In terms of the trial itself, when asked if she would be following it, Dame Vivienne Westwood said she would be going on Monday to Belmarsh prison, where Assange is being held, with banners prepared in his support.

WikiLeaks founder Julian Assange spent seven years at the Ecuadorian Embassy in London after skipping bail and asking for political asylum in 2012 to evade possible extradition to the United States.

The whistleblower was forced out of the embassy last year and is being held at London’s high-security prison pending extradition trial.