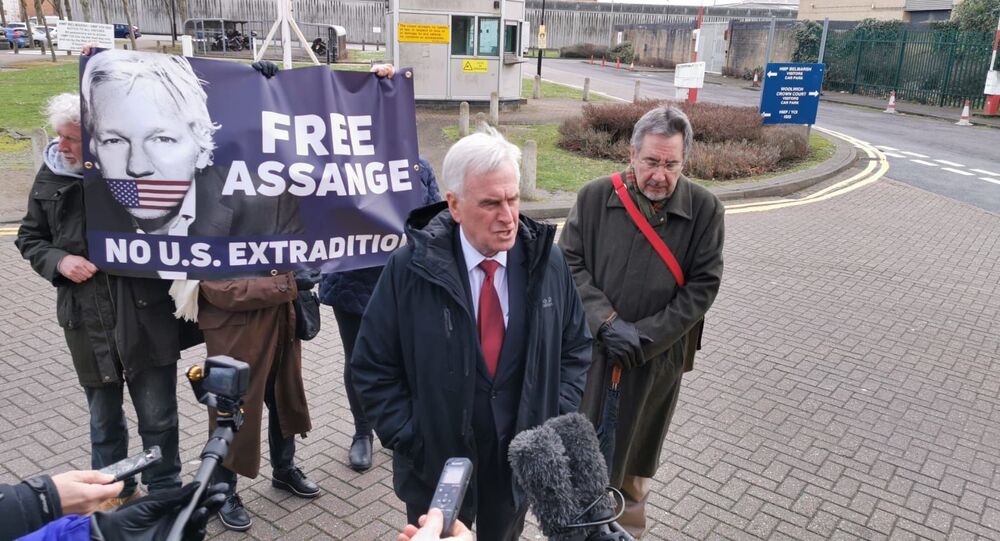 The longstanding activists gave a presser to a small crowd of journalists on Thursday outside the prison where the WikiLeaks founder was being detained, just four days ahead of two major hearing that will determine whether the Australian activist and whistleblower would be extradited to the United States.

The pair of lifelong activists held the presser outside the prison following the visit to a small group of journalists, with members of the Campaign to Defend Julian Assange also attending the event.

The presser comes ahead of two crucial hearings at Belmarsh Magistrates' Court, located in Woolwich Crown Court, to determine whether the Australian journalist will be extradited to the United States, where the US Department of Justice charged him under the 1917 Espionage Act last year.

Details of Visit with WikiLeak's Assange

Mr McDonnell said there was "no doubt" that Assange's imprisonment had affected his health, but added the two visitors had "found him strong and determined to [defend] his case".

It should be "absolutely clear" that Assange's case was "one of the most important and significant" trials of the generation, possibly longer, he added.

He said: "I think it’s the [Alfred] Dreyfus case of our age; the way in which a person is being persecuted for political reasons for simply exposing the truth of what went on in relation to recent wars.

Evidence in the trial, namely revelations involving US president Donald Trump's alleged engagement with the WikiLeaks founder, demonstrated that the case was a "political trial", he said.

Speaking on Assange's prison conditions, Mr McDonnell said that the activist was being detained in a cell for "20 hours a day with limited field of association and exercise" which "clearly takes its toll".

But the pair had found him "extremely strong" despite his upcoming trial, and "absolutely determined that the truth will be out and that he will not be extradited", allowing him to return to his work, McDonnell said.

He concluded: This is all about the protection of sources, whistleblowing, [and] ensuring that people have true information in the public domain on which they can make they own judgments. As I said, this is a political trial and we need to ensure that this extradition doesn’t take place.

Politicisation of Assange Case, Questions From the Press

When asked by the press about the potential extradition, McDonnell said that if it took place, it would "damage the democratic standing" of the UK and US.

McDonnell said: "We have a long tradition in this country of standing up for journalistic freedom, standing up for the protection of whistleblowers and those who expose injustices. If this extradition takes place, I think it will damage our reputation; I’m hoping it doesn’t.

When asked about the alleged pardon from the Trump administration and nature of the trial, McDonnell agreed that it demonstrated "the political nature of the trial itself", adding that supporters needed to ensure that "extraditions shouldn't be used for political purposes"

There were also "deeply held doubts" across parliament and UK government on the nature of the trial, namely after UK Labour leader Jeremy Corbyn confronted Boris Johnson during a Prime Minister's Question session in mid-February.

He hoped that the Labour Party would oppose Assange's extradition and noted that many Labour MPs had "voted against the extradition proposals" when first proposed.

Both McDonnell and Rees, along with supporters, were "pleading" for peaceful demonstrations outside the court to "demonstrate the strength of feeling that people have" amid the global campaign.

Growing support for Assange demonstrated "the concerns that Democrats have with regard to what is happening", he added, noting upcoming rallies set to take place in France.

© Sputnik /
Supporters of the Committee to Defend Julian Assange Campaign stand outside HM Belmarsh Prison ahead of a presser with UK shadow chancellor John McDonnell
Speaking on Assange's torture at the embassy and in prison, he agreed with UN special rapporteur on torture, Nils Melzer, adding he was "anxious" of the ill effects on the whistleblower's health. Mr McDonnell slammed the treatment of Assange at Belmarsh as "barbaric", in addition to the overall prison system across the UK.

When asked about building parliamentary support for Assange, McDonnell said that once the hearings began it would be "difficult" to raise it in Commons, but that Labour would look to see if they could raise the case "within parliamentary rules".

He added that Labour would work to build "cross-party support" as [former Brexit secretary and Conservative] David Davis and others had raised concerns, adding that such efforts would "ensure that we have a climate of opinion in this country that prevents this extradition from taking place".

Mr Rees said in an interview that John McDonnell MP had been "glad" to see Assange, signalling broader support from the international communtiy to prevent his extradition.

Anyone detained at Belmarsh prison for such a length of time would "be finding life tough", Mr Rees said, adding that the Wikileaks founder was "a very focused, very strong individual".

Talks between the pair and Mr Assange had been "informative and wide-ranging", he added.

Speaking on the upcoming rallies across London on Saturday and Monday, Mr Rees said that there was a great deal of "international, global interest" in Assange's case, adding that it was a "global cause".

Mohamed Elmaazi
John Rees Westminster Magistrate's Court 19 December 2019 No 1
He concluded: "On Monday, there will be a demonstration here at Belmarsh but there are also going to be demonstrations in cities across the world from Australia to the West Coast of America. So I think you can see from that this is a dynamic, determined movement which has seen that there is a gross injustice being perpetrated and they are determined to put an end to it.

Julian Assange has been charged by a US court on eighteen counts under the 1917 Espionage Act for his role in publishing the Iraq and Afghanistan war logs leaked by whistleblower Chelsea Manning, which revealed war crimes committed by US and UK military. If convicted, he could face up to 175 years.

Lawyers and representatives of WikiLeaks are set to hold a press conference in Paris later in the day to brief the media, four days ahead of the scheduled court hearing at Woolwich Crown Court on 24 February.

The address took place just days after Australian MPs Andrew Wilkie and George Christensen visited the UK earlier in the week to hold a presser with the Foreign Press Association in London, where the two urged Downing Street not to extradite the detained activist.

The news comes after Assange was forcefully detained from the Ecuadorian embassy in Knightsbridge, London in April last year, in an attempt to avoid extradition to the US after being granted asylum at the facility, but now remains at the high-security prison east of London.