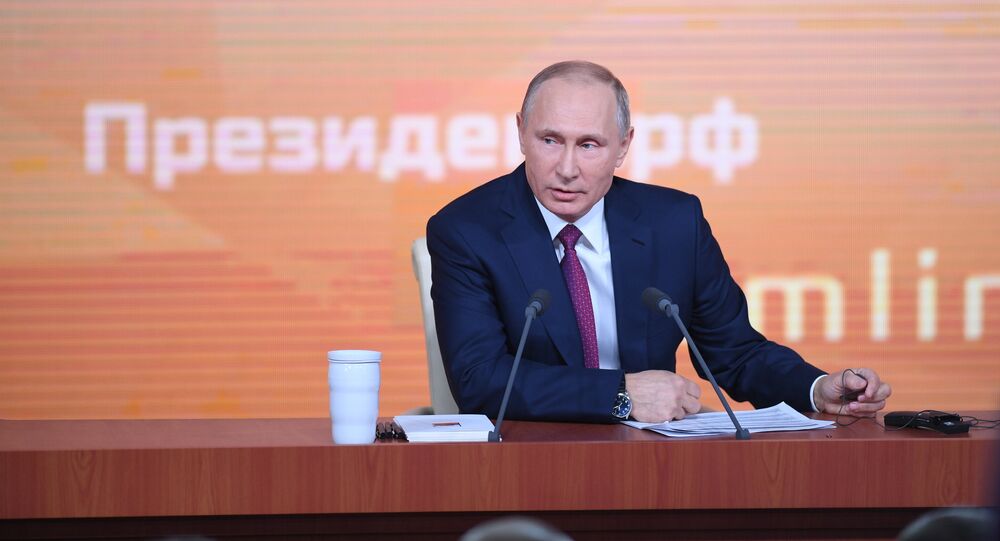 This Thursday, Russian President Vladimir Putin hosted his signature annual press conference, where he faced a myriad of questions that touched on a wide range of issues, from foreign policy highlights to certain domestic issues.

Sputnik has compiled a handy list of key points that the Russian President discussed during the conference.

On Trump: Russia Ready to Work Together… If You Are Up to It

The first question a foreign media outlet asked Putin concerned allegations of collusion between the Trump campaign and the Russian government.

Replying to the US TV network ABC's question about the nature of contacts between the Russian government and certain officials in the Trump campaign, Putin said that it is only natural for diplomats to speak with officials in their host countries.

"What's so strange about this? Why do you have this 'Russian spy' hysteria?"

The Russian President also dismissed any accusations of interference in the 2016 US presidential race, stating that "they have been invented by those aiming to de-legitimize Trump."

"These people don't understand they are undermining their own country, they aren't showing respect for the Americans that voted for Trump."

READ MORE: Trump: 'Having a Good Relationship With Russia is a Great, Great Thing'

Putin also voiced his hope that Russia and the US can "work closely on a range of issues," though he was not sure if Trump was still up to the task, given the "well-known limitations" that the US President has been facing at home.

The President also highlighted that the ultimate judgment on Trump is reserved for the American people, and expressed his respect for the US opposition.

On an Arms Race With US: Russia Will Not be Dragged Into This

Expanding on the state of the relationship between the two countries, Putin also discussed the potential US withdrawal from the Intermediate-Range Nuclear Forces Treaty (INF) and its implications for the international security.

"We hear talk about the problems with the INF Treaty. Apparently, conditions are being created and an information-propaganda campaign is being run for a possible US withdrawal from the treaty," Putin stated.

The Russian President noted that there is "nothing good" about the US withdrawal, which "will be highly detrimental to international security."

Putin stated that Russia does not plan to leave any missile treaty itself, though he vowed to maintain the country's security.

The President, however, emphasized that although Russia will take the necessary steps, it will avoid an arms race.

"We will not be dragged into an arms race," Putin asserted.

Putin: the US has de facto left the INF Treaty already, with the deployment of the Aegis ashore, but Russia is not going to leave the Treaty, will ensure its security without getting into an arms race.

On the US Crackdown Against RT&Sputnik: What About Freedom of Speech?

Putin also discussed another contested issue in the US-Russia relations, the decision of the American government to brand Russian news outlets and forcing them to register as "foreign agents", significantly impeding their operations in the States.

Putin also pointed out that the informational impact of the Russian news outlets is "dwarfed, in comparison, by that of the US media in Russia and across the world."

RT was forced to register as a foreign agent, although Sputnik was not covered by the decision.

However, both outlets were stripped of their Capitol Hill credentials.

On Syria: A Lot of Things Done, More to Do

Turning away from US-Russia relationships towards global security issues, Putin commented on the situation in the Syrian Arab Republic, including his recent visit to Hmeymim Airbase.

The Russian Commander-in-Chief pointed out that "the current security situation allowed [him] to take such a trip," stressing the positive developments in the country.

Putin indicated that the US is not contributing enough to the successful resolution of the Syrian crises, urging "all parties involved" to "resist the temptation to take advantage of short-term political goals."

"We see that terrorists are escaping Syria to Iraq and the US doesn't hit them because they may want to use them later against [Syrian President Bashar] Assad… That's very dangerous."

The President also addressed the refugee issue, calling upon the international community to act together to resolve one of the largest humanitarian crises in history.

"All good people around the world should realize that unless we address the Syrian refugee problem together, everyone will face issues… Terrorists recruit members from groups in poverty," Putin added.

On North Korea: Opposition to Kim's Nuclear Program as well as US Provocations

The President affirmed Russia's staunch opposition to global nuclear proliferation and said that Russia is committed to a nuclear-free Korea.

"On North Korea, we don't accept it as a nuclear country," Putin stated.

At the same time, he was critical of US attempts to pressure the country into submission, suggesting that this strategy is counterproductive.

"The US has gone beyond previous deals [with North Korea]… and has provoked North Korea to withdraw from agreements."

"I think we heard the US would stop military drills, but no… they didn't."

Putin stressed that it is vital to act "very carefully" when dealing with the DPRK's nuclear program.

"The US already used nuclear weapons against Japan, unjustifiably, in my opinion."

"But now there is absolutely no need to use them [against North Korea]."

Putin to AP: North Korea Is One Launch Away From a Global Cataclysm Due to US Reneging on Their Word

On the Olympic Ban and Rodchenkov: Politically Motivated, but Not Entirely Unjustified

The President also reflected on the recent decision of the International Olympic Committee to ban Russia from fielding athletes in the upcoming Winter Olympics in South Korea.

Putin pointed out that the Russian sports authorities are indeed partly to blame for the situation, as "there have been violations."

He also stated that the decision to appoint Grigori Rodchenkov, the World Anti-Doping Agency (WADA) informant, who fled to the US and sparked the scandal, as the head of Russian Anti-Doping Laboratories was a "major mistake."

Putin indicated that Rodchenkov may not be a reliable source, given that the defector had attempted to commit suicide and was diagnosed with a psychiatric condition.

"He is also under the control and protection of the FBI. For us, this is a disadvantage. That means that he is under control of the American intelligence services: who knows what they are doing with him."

However, Putin also noted that the IOC and the WADA made their decisions against the backdrop of the Russian presidential elections.

"We respect international sports organizations, including the IOC and the WADA… But we understand that they are being pressured, threatened."

How could 'suicidal' guy like Rodchenkov be the boss of anti doping centre? Putin: Yes, that is strange #PutinPresser

On Russia's Presidential Race: You Cannot Argue With the Results, but Pluralism is Vital

Turning towards the domestic matters, Putin spoke about his decision to participate in the upcoming Russian presidential race.

The incumbent President, who announced that he will run as an independent candidate in the 2018 Presidential Elections, laid down his plans for the further development of Russia.

Putin stressed that the comprehensive modernization of the Russian economy, infrastructure and healthcare as well as the introduction of new maternity benefits schemes will be at the heart of his campaign.

At the same time, the President pointed to the successes that his Administration has achieved in improving the Russian economy and social welfare.

"We've accomplished a lot with services… we've reduced infant mortality rates, traffic accident mortality rates… we've made some progress on cancer, but not as much as we'd like to," Putin stated, also citing Russia's growing life expectancy.

Regarding the economy, Putin noted that despite certain setbacks, Russia has been overcoming two major challenges: dropping oil prices and Western sanctions.

"There is growth. And we overcame two well-known shocks."

"The economy is more and more reliant on the internal markets… Our internal trade grew by three percent", the President added.

"This has to mean something," he says. "The opposition needs proposals on how to make life better."

At the same time, the President highlighted that it is important to have constructive opposition in the country.