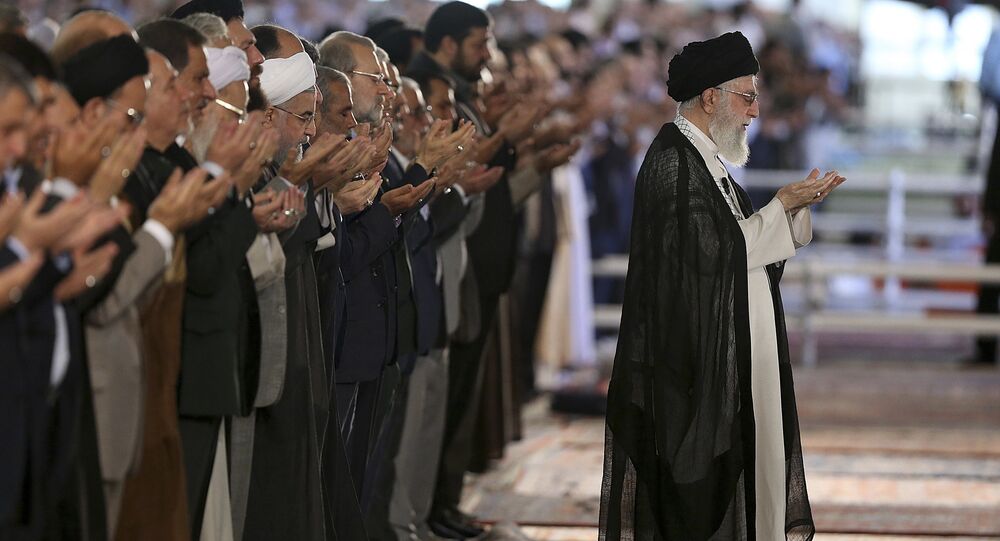 On 8 January, Iran targeted two American facilities in Iraq, the Ayn al-Asad Air Base and in Erbil in retaliation for the killing of IRGC Quds Force Commander Qasem Soleimani in a US drone strike several days earlier.

Iran's Supreme Leader Ali Khamenei said the day Tehran targeted US facilities in Iraq in response to the killing of the country's top military commander Qasem Soleimani was "a day of God", Reuters reported.

"The fact that Iran has the power to give such a slap to a world power shows the hand of God", Khamenei said while referring to the airstrikes against US military facilities.

The Iranian supreme leader's remarks were made as Khamenei led Friday prayers in Tehran, the first time he has done so since 2012. His comments were reportedly accompanied by chants of "Death to America!"

Khamenei said that Quds Force Commander Soleimani was "the most powerful" commander in the region’s "resistance front", and is being mourned by millions of supporters in Iran and thousands in Iraq.

He also noted that the killing of Soleimani was a "disgrace" to the American administration, showing the "terrorist nature" of the US, while also calling Donald Trump a "clown", who only pretended to support the Iranian people.

Nevertheless, the supreme leader underlined that Iran's attack on the US military facilities last week was a "blow to America's image", as quoted by AP.

During his address in Tehran, Khamenei also called the IRGC’s Quds Force a "humanitarian organisation with human values" and assured that its fighters were "without borders".

Khamenei said that the IRGC was maintaining the country's security and that Tehran’s enemies used the Ukrainian Boeing 737 incident to "weaken" the military organisation. He also maintained that the tragedy was "used" by the nation’s adversaries to "overshadow" the grief surrounding the death of Soleimani.

Khamenei also commented on the recent developments regarding the Joint Comprehensive Plan of Action (JCPOA), also known as the Iran nuclear deal, criticising France, Britain, and Germany for triggering a dispute resolution mechanism and saying that European partners were only "serving" US interests.

"The Europeans have shown they are puppets of the US", Ayatollah Khamenei was quoted as saying. "They are waiting to see the Iranians brought to their knees".

The European parties to the JCPOA cannot be trusted, Iran's supreme leader concluded.

On 14 January, France, Great Britain, and Germany, known as the E3, confirmed that they had launched the Iran nuclear deal dispute mechanism, created in order to deal with possible violations of the JCPOA, concluded by Iran, China, France, Russia, the United Kingdom, the United States, and Germany in 2015.

The deal was to have Iran considerably limit its nuclear programme and eliminate its stockpile of medium- and low-enriched uranium in exchange for the removal of international sanctions. However, the US unilaterally pulled out of the treaty in 2018, while also imposing energy and banking sanctions on Iran, thus prompting Tehran to begin gradually reducing its JCPOA obligations. Following the developments, Iran continued calling on European signatories to the treaty to honour their obligations and shield Tehran from US sanctions, but to no avail.

© AFP 2020 / ALEX HALADA
Abbas Araghchi (Center R), political deputy at the Ministry of Foreign Affairs of Iran, and Helga Schmid (Center L), Secretary General of the European Union's External Action Service (EEAS), take part in a meeting of the Joint Commission of the Joint Comprehensive Plan of Action (JCPOA) attended by the E3+2 (China, France, Germany, Russia, United Kingdom) and Iran on July 28, 2019 at the Palais Coburg in Vienna, Austria.

Following the assassination of Soleimani, Iran announced on 5 January that it would no longer comply with the remaining obligations under the deal and from now on would start enriching uranium based on its technical needs.

© AP Photo / Ebrahim Noroozi
Zarif Says E3 'Sold Out' Iran Nuclear Deal to Avoid New Trump Tariffs: 'You Only Whet His Appetite'
The death of Iran's military commander was followed by Tehran's retaliatory attacks on the US military facilities at the Ayn al-Asad Air Base and a facility in Erbil in Iraq on 8 January. Just a few hours after Iran's airstrikes, a Ukraine International Airlines Boeing 737 crashed near Tehran that was initially blamed on a technical malfunction. Later Iranian officials confirmed that the nation’s military had unintentionally shot down the plane while awaiting Washington's response to its earlier attacks, which was followed by a wave of unauthorised protests in Tehran.
...
Reddit
Google+
Blogger
Pinterest
StumbleUpon
Telegram
WhatsApp
11810
Tags:
Europe, Great Britain, United Kingdom, Germany, France, Ayatollah Ali Khamenei, Donald Trump, Qasem Soleimani, Joint Comprehensive Plan of Action (JCPOA), Iraq, Iran
Community standardsDiscussion