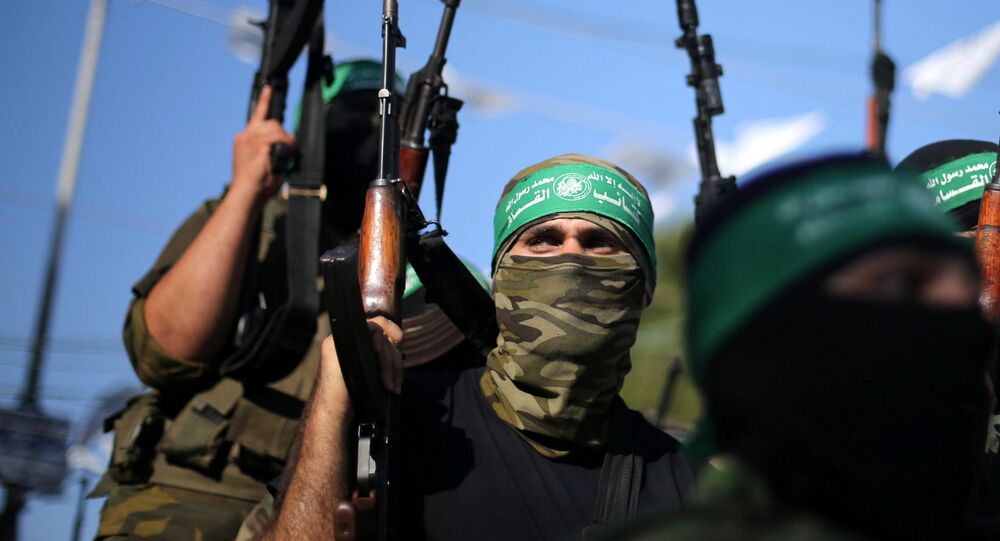 Hamas has announced the beginning of the third "intifada" six days after US President Donald Trump announced the controversial decision to recognize Jerusalem as Israel's capital.

According to the Palestinian Islamic fundamentalist organization, which governs the Gaza Strip, it expects the "day of rage" protests against the US move, which claimed two lives and left over 1,000 injured on Friday, to continue.

"Protests will continue in the West Bank, the Gaza Strip and Jerusalem. Because we protest against the US recognition of Jerusalem as the capital of Israel, as we consider it the capital of Palestine. We hope that the protests will develop further and further," the movement's press secretary told RIA Novosti.

A day after Trump's announcement, which has been condemned by Muslim states and countries backing a two-state solution to the Israeli-Palestinian crisis, the leader of the political bureau of Hamas called for a third "intifada" uprising "against the US and Zionist plans to Judaize Jerusalem." Amid tense clashes between Palestinians and police over the US decision on Jerusalem, the Israeli army has intensified its operations against Hamas, particularly, targeting its tunnels in the Gaza Strip.

© AFP 2021 / Mahmoud ZAYYAT
Trump's Jerusalem Move 'Will Launch a Very Big Intifada' – Gaza Uni Professor
Most recently, a member of the Palestine Liberation Organization, Wasel Abu Yousef, told Sputnik that the Palestinian movements of Hamas and Fatah, formerly rivals, are united over Trump's decision on Jerusalem. Following a new round of reconciliation talks under the mediation of Egyptian authorities held in October, Hamas and Fatah signed an agreement with both sides promising it would usher in a new era of Palestinian unity.

The previous intifada uprisings in 1987-1991 and 2000-2005 left hundreds of Israelis and thousands of Palestinians dead. The first Palestinian intifada was a Palestinian struggle against the Israeli occupation of the territories conquered during the 1967 Six-Day War, while the second uprising was provoked by visits of Israeli Prime Minister Ariel Sharon and a group of his supporters of the Temple Mount. While the second intifada had declined, the situation still has remained tense.

Strictly 50 years ago, the wider world was stunned as Israel occupied the remaining Palestinian territories of the West Bank, East Jerusalem, Gaza Strip and even the Golan Heights in Syria in merely six days.

In the following 20 years the Palestinians did not put up with Israeli dominance, which is when the uprising, otherwise dubbed the first intifada, started.

Amidst numerous Israeli settlements increasingly rising up on the historically Palestinian land, November 1987 saw the first revolt. The Palestinians were struggling, basically unarmed, throwing rocks at the Israeli troops.

The State of Palestine was proclaimed on November 15, 1988, in a session of the Palestinian National Council, the supreme PLO [Palestine Liberation Organization] governing body, which also recognized both the Arab and Jewish parts of Palestine providing Israel gave up claims over all territories it had occupied since 1967 and freed the land from its settlements. Back then, the PLO condemned terrorism in all its forms, thus paving the way for negotiating peace with Israel.

© AFP 2021 / SAIF DAHLAH
Former Rivals Hamas and Fatah United Against Trump's Decision on Jerusalem - PLO Member
One of the landmark political events during the first intifada was the Madrid Conference (October 30-November 1, 1991), which involved peace talks hosted by Spain and mediated by the US and the Soviet Union.

Early 1993 saw another round of talks held in secret in Oslo. The parties arrived at an agreement that was expected to end the PLO-Israel conflict. The 1993 agreement also stipulated the withdrawal of Israeli forces from the Gaza Strip and the West Bank and proclaimed a limited Palestinian National Authority. This time, the Palestinians withdrew their demand that the State of Israel should cease to exist.

The agreement was signed the same year in Washington, by Yasser Arafat, the then head of the PLO Executive Committee, and Yitzhak Rabin, the Israeli prime minister at the time. Israel and the PLO also signed an additional agreement, which recognized both entitiesas full-fledged negotiators.

This is where Hamas and the notion of the suicide bomber came in, leaving an estimated 1,000 Israelis dead in public places due to terrorist attacks and gunfire. Israel retaliated with airstrikes, causing approximately 3,000 deaths among the Palestinian civilians.

In July 2000, Bill Clinton summoned Yasser Arafat and Israeli Prime Minister Ehud Barak at Camp David, the presidential retreat in Maryland, but the contested status of Jerusalem and Palestine refugees brought the talks to a standstill.

Brought about by Sharon’s controversial visit to the historic Temple Mount in the city of Jerusalem on September 28, 2000, illegally occupied by the Israelis by then, the second intifada quickly grew into an open, deadly war. Its other name, Al-Aqsa Intifada, virtually refers to the original name of the Temple Mount, where the “shaking off,” or the intifada, started – Al-Aqsa Mosque.

Yasser Arafat, an all-time Palestinian leader, died in a Paris hospital in November 2004. Earlier the Israeli Air Force eliminated Hamas leaders, including sheikh Ahmed Yassin and his successor Rantisi. Having lost its most high-profile figures, Hamas became demoralized to some extent and started operating locally.

The Sharm el-Sheikh Summit on February 8, 2005, is traditionally associated with the end of the second intifada, as Palestine President Mahmoud Abbas and Israeli Prime Minister Ariel Sharon concluded bilaterally that both parties would agree to a cease-fire. The upcoming Roadmap for Peace, initiated by the so-called Quartet on the Middle East – comprising the United States, the European Union, Russia and the United Nations – reiterated the aforementioned commitment, but with little effect, as violence still persisted.

In the wake of the second intifada, Israel, Canada, the United States and Japan condemned Hamas as a terrorist organization, while Australia and Britain slammed solely the military wing of Hamas. The movement is banned outright in Jordan. On December 17, 2014, the European General Court, a branch of the European Union's Court of Justice, ticked the Islamic Resistance Movement Hamas (Harakat al-Muqawama al-Islamiya) off its list of terrorist organizations.