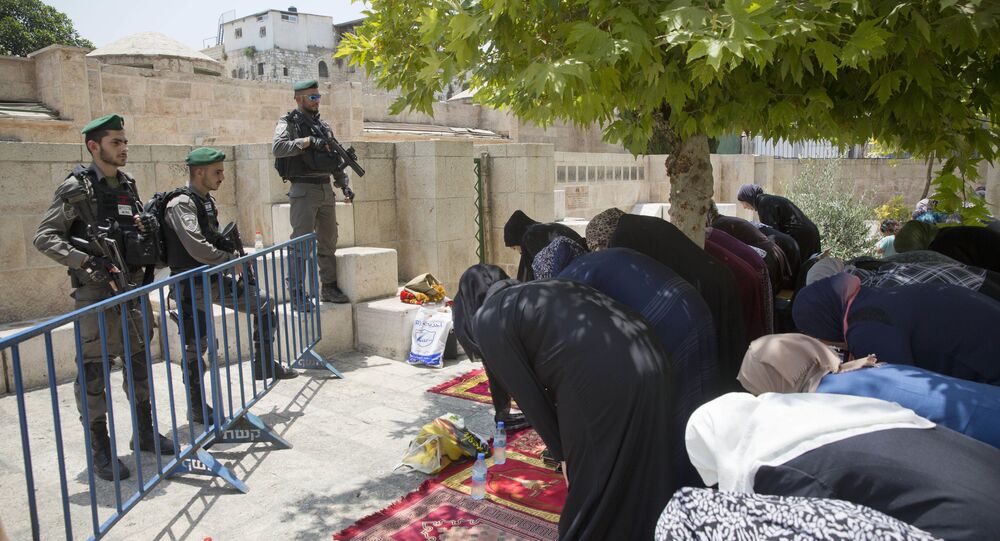 Turkish President Recep Tayyip Erdogan called on Israel to recognize Palestine and to respect the Al-Aqsa mosque, which is one of the holiest sites in Islam.

"Everyone, who knows Israel, is aware that restrictions on Al-Aqsa mosque are not due to safety concerns. Israel is trying to take Al-Aqsa from Muslims under the guise of counter-terrorism efforts," Erdogan said at the meeting of the Justice and Development Party (AKP) parliamentary group in Ankara, as quoted by the Daily Sabah newspaper.

The president also called on Israel to recognize Palestine and to respect the Al-Aqsa mosque, which is one of the holiest sites in Islam.

© AFP 2021 / AHMAD GHARABLI
Turkish PM Slams Israeli Restrictions on Muslims' Access to Al-Aqsa Mosque
On July 21, Arab neighborhoods around the Old City of Jerusalem saw violent clashes between Israeli police and Muslims, who were gathered to pray in the Al-Aqsa mosque at the Temple Mount. Muslims refused to go through the metal detectors at the holy site's entrance, which had been installed after the July 14 Palestinian attack at the holy site. The attack claimed the lives of two Israeli police officers.

In order to put an end to violence, which has so far left at least four Palestinian killed and dozens more injured, Israel has reportedly decided to remove the metal detectors and security cameras from the Temple Mount.