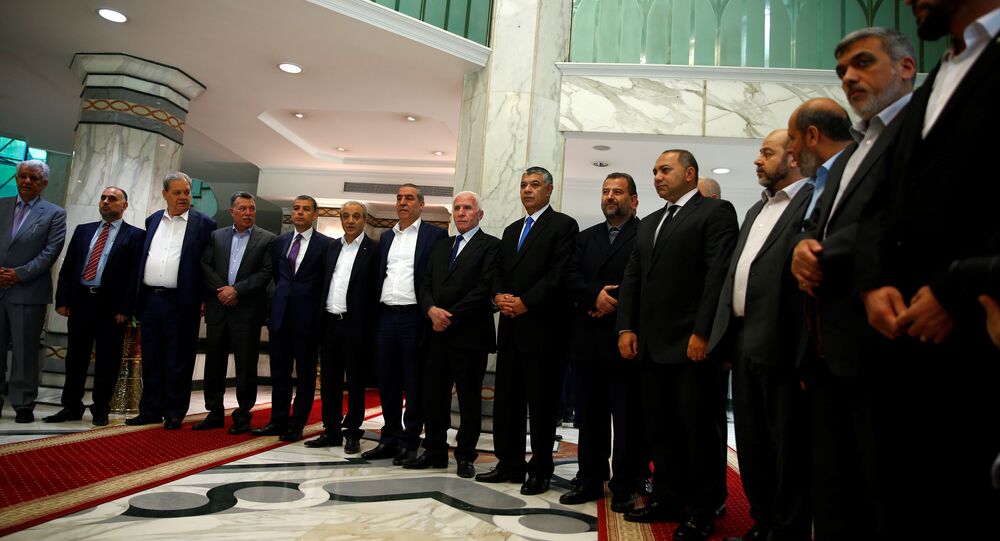 The recently reached reconciliation deal between the rival political parties Fatah and Hamas provides the chance to put an end to the 10-year-split and the possible establishment of a unified Palestinian National Authority.

“The agreement will allow the national unity government to fully carry out its tasks in both the Gaza strip and the West Bank of Jordan,” the head of the Fatah delegation said.

Moreover, the two reconciling rivals have agreed to make the unity government responsible for the Rafah border crossing in Gaza on November, 1, two sources said on Thursday.

© REUTERS / Ibraheem Abu Mustafa
Egypt, Palestine, Jordan Call for Recommencing Israel-Palestine Talks
On October 10, the rival Palestinian movements Hamas, the Palestinian Islamic fundamentalist organization, and Fatah, the dominant Palestinian political party, began a new round of reconciliation talks under the mediation of Egyptian authorities. Both of them favor the creation of the unified Palestinian National Authority.

In early October, the Palestinian Unity Government held its first session in Gaza since 2014 as part of implementation of the arrangements aiming to settle the long-standing conflict between the Palestinian parties.

The Palestinians have been seeking to create their own state on the territories of the Gaza Strip and the West Bank for decades. The conflict between Hamas and Fatah escalated in 2007. Since then, Hamas has been governing the Gaza Strip, while Fatah maintained control of the West Bank. Over the years, repeated attempts have been made to achieve reconciliation between the two parties, but all efforts have failed so far.

Hamas Refuses to Surrender Weapons Amid Reconciliation Talks With Fatah