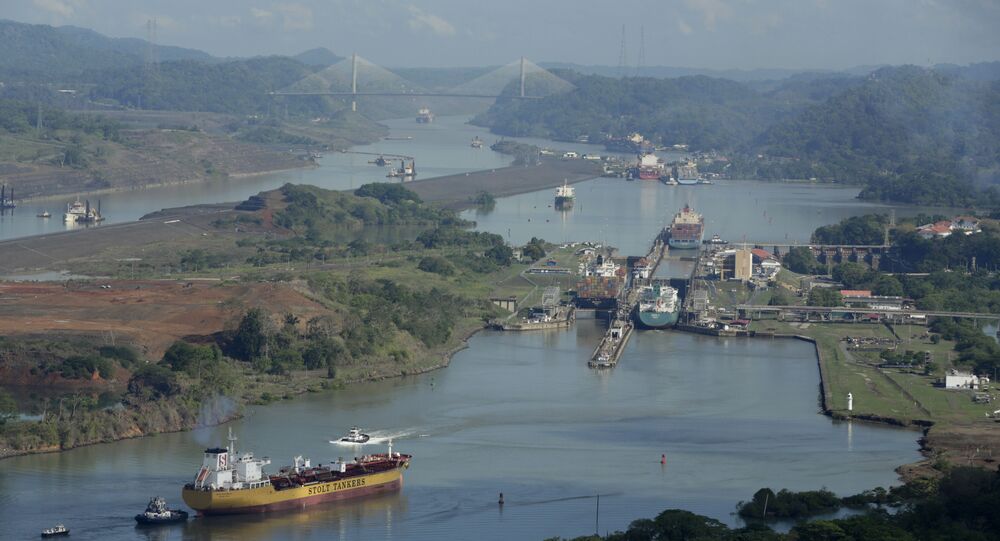 Panama and other Latin American countries are keen to develop relations with Beijing because China is investing in infrastructure development, while the US undermines the region's governments, expert on Latin America Alexander Kharlamenko told Sputnik.

© AFP 2021 / YOMIURI SHIMBUN
Unfriended: 'Panama's Cutting Ties With Taiwan in Favor of China a No-Brainer'
On June 13, Panamanian Foreign Minister Isabel Saint Malo signed an agreement in Beijing with her Chinese counterpart Wang Yi on the establishment of diplomatic relations. In doing so, Panama simultaneously severed ties with Taiwan, which Beijing considers a province of China.

Panama followed the African island nation of Sao Tome and Principe, which broke off diplomatic relations with Taipei in favor of Beijing last December.

The move leaves Taiwan even more isolated diplomatically, since it is now recognized by just 19 UN member states, as well as the Vatican. Eleven of the countries which still recognize Taiwan are in Latin America and the Caribbean.

Alexander Kharlamenko, an expert on Latin America at the Russian Academy of Sciences, told Sputnik that the remarkable decision is connected to a recent wave of corruption scandals involving Panama and other Latin American countries which Washington, an ally of Taiwan, had a hand in exposing.

"Financial scandals in all these countries, including Panama, were initiated by Washington. Things even got so far as [US] economic sanctions against several media outlets in Panama because of their position on this issue. They were on the brink of ruin," Kharlamenko said.

© AP Photo / Esteban Felix
US Attempts 'Intervention' in Nicaragua With Proposed Anti-Ortega Sanctions
"The US initiation of these scandals created a precedent, according to which some financial transactions which had been permitted in those countries were henceforth considered to be corrupt. I think a lot of people in Panama's business and political circles have suffered from these scandals."

"They are trying to somehow balance Washington's influence in the country by developing relations with China. I surmise that when they have normal relations with China they [Panamanians] will be treated with more consideration domestically and in the region; they will not be sacrificed for America's destabilization plans in other countries in Central and Latin America and the Caribbean."

"After all, in this case it is not so much Panama that is important for the United States, so much as the way it can be exploited to destabilize the situation in Venezuela, which has already been done in Brazil, to carry out similar plans in Ecuador and other countries where there is growing suspicion towards US policy."

© REUTERS / Alberto Solis
A cargo ship is pictured crossing through the Miraflores locks, a day before the inauguration of the Panama Canal Expansion project, in Panama City, Panama June 25, 2016
China's increased economic investment in Latin America has also made diplomatic ties attractive for Panama. Chinese business has sponsored plans to construct a rival to the Panama Canal in Nicaragua, and China is involved in the proposed construction of the Bi-Oceanico Central railway which would link the Pacific and Atlantic Oceans via Brazil, Bolivia and Peru.

In November, Chinese President Xi Jinping attended the Asia-Pacific Economic Cooperation (APEC) forum in Lima, where he promoted the Regional Comprehensive Economic Partnership (RCEP), a free trade alternative to the TPP which was vetoed by US President Donald Trump.

"All these projects, related to trans-continental transport links, have a strong influence on Panama. It could lose its monopoly on the connection between the two oceans," Kharlamenko said.

© AP Photo / Chiang Ying-ying
Taiwan Outraged by Panama's Decision to Cut Diplomatic Ties With Taipei
As has happened in Eastern Asia, the development of Latin American economic ties with China could force countries like Panama out of the US political sphere of influence.

"I think that this can strengthen Chinese influence in the Panama Canal zone. At the same time, there is obviously a growing rivalry between China and the United States in this strategic area. For China, it will always be a problem that the US is legally responsibility for the security of the Canal. This, of course, limits the real sovereignty of Panama. I'm sure this is the reason why it hadn't established diplomatic relations with China for so long, that was effectively banned by Washington. I think that even now this factor will be a serious constraining factor on Panama's policy."

Panama's 1903 independence from Colombia was orchestrated by the United States, which then controlled a zone stretching 8 km (5 miles) to either side of the canal until 1979. In 'Confessions of an Economic Hitman', American writer John Perkins asserts that Omar Torrijos, the Panamanian leader who secured the return of the zone and a guarantee that the US had over the canal itself in 1999, was assassinated for his efforts in 1981, when he died in a mysterious plane crash.  Panama's next leader, Manuel Noriega, was removed forcibly by the US in a 1989 operation that cost over 200 Panamanian lives.