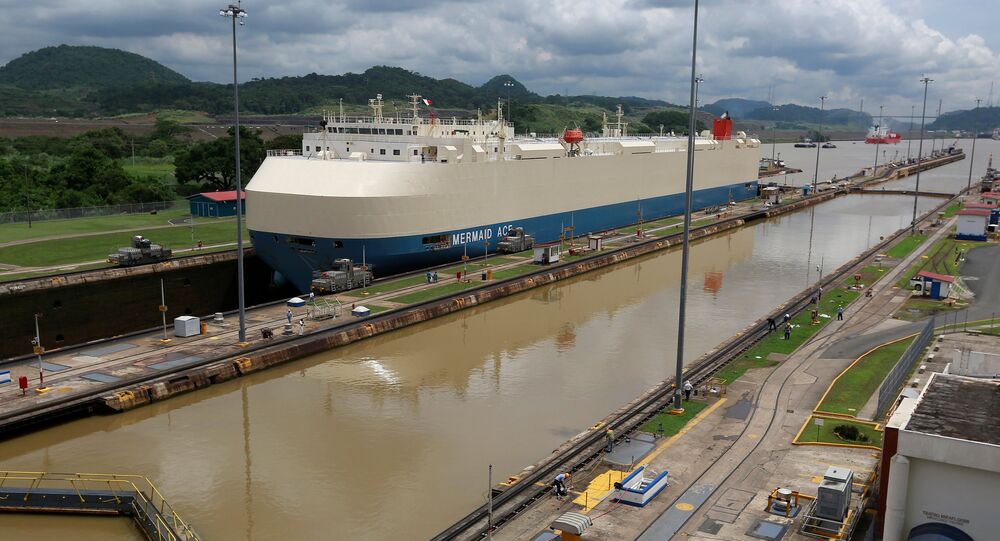 The Panama Canal has reopened following almost ten years of reconstruction work, but the $5 billion project may not pay off in the face of decreased shipping and a possible rival.

© REUTERS / Carlos Jasso
Jill Biden to Lead US Delegation to Ceremony Marking Panama Canal Expansion - Obama
The Panama Canal reopened on Sunday after almost ten years of reconstruction work which has doubled its capacity, from 300 to 600 million tons of cargo per year. The canal has been widened from 34 to 55 meters, and its depth from 12 to 18 meters.

However, the US-backed $5 billion reconstruction project is not facing a rosy future, because of a downturn in global shipping and the possibility of a rival canal being built in Nicaragua.

The downturn in international trade due to a slowdown in manufacturing in China, and lower oil prices which allow some shippers to take a longer route, have led to a 10.2 percent drop in traffic down the canal in 2015.

Mikhail Belyat, an expert in Latin American affairs from the Russian State University for the Humanities told RT Russian that shareholders in the 77-kilometer long canal will take a long time to recoup their costs.

"There is a lot of money from US shareholders invested in that canal," Belyat explained, and added that the US will do its best to oppose a Chinese project to build an alternative canal.

A Chinese telecoms mogul named Wang Jing has set up the Hong Kong Nicaragua Development, which has agreed on its construction with Nicaraguan president Daniel Ortega. The company says the new canal will cost $50 bln to build, and it will be deeper and longer than the Panama Canal.

"According to the current (Nicaraguan) project, there will be two powerful ports at the entrance and exit to the canal; they will compete with the Panamanian ones," Belyat said.

"In addition, the price of using the channel and the ports along the coast will decrease. That doesn't suit the US," he said.

"The US has staged a few interventions in Nicaragua with the aim of building a canal there. However, in the 20th century they intervened to stop a canal from being built, because it would become an alternative to the one in Panama."

© AP Photo / Arnulfo Franco, File
In this May 11, 2016 file photo, ships transit through the Panama Canal near Panama City
Belyat thinks that Wang Jing's agreement with President Ortega could be in jeopardy if Ortega doesn't win the next elections, in which he is seeking election for a third time.

"Ortega is running for office for a third time. He doesn't have a big chance and he has to withstand pressure from the opposition, which is supported by the US. If a liberal president comes to power, the terms of the agreement for the Nicaragua canal may be revised."

If Nicaragua does build a canal with the help of the Chinese, it would be have grave geostrategic implications for the US, Belyat said.

"It will be a geostrategic bomb. China comes to the American continent. Its presence is already obvious; there is Chinese influence in every Latin American country. But a canal is a massive thorn, close to the US border."

Interest in building a canal to link the Pacific and Atlantic Oceans dated back to the 16th century, when the Spanish colonized Central America.

In 1850 the United States and Great Britain signed the Clayton-Bulwer Treaty to build a canal through Nicaragua, which never went beyond the planning stages.

In Panama, the French got the furthest when they got a concession from the Colombian government to begin building a canal in Panama, then part of Colombia, in the 1880s.

© Sputnik / Yuri Nikolayev
Russian Business May Participate in Nicaragua Canal Construction Tenders
The project was led by Ferdinand de Lesseps, the French diplomat who had built the Suez Canal in Egypt. However, the French attempt was aborted after engineering difficulties, illnesses among workers, financial problems and a political corruption scandal.

The US took control of the French attempt after backing a Panamanian separatist movement in Colombia. After Panama declared its independence in 1903, the US Navy parked a warship, the USS Nashville, in local waters, and stopped Colombian resistance to the move.

Panama also got $10 million from the US, and allowed the US to take control of the Panama Canal Zone in 1904; after $350 million worth of construction work the first ship passed through in 1914.

The US maintained ownership of the canal until 1999, when it handed control over to a Panamanian government agency, the Panama Canal authority.