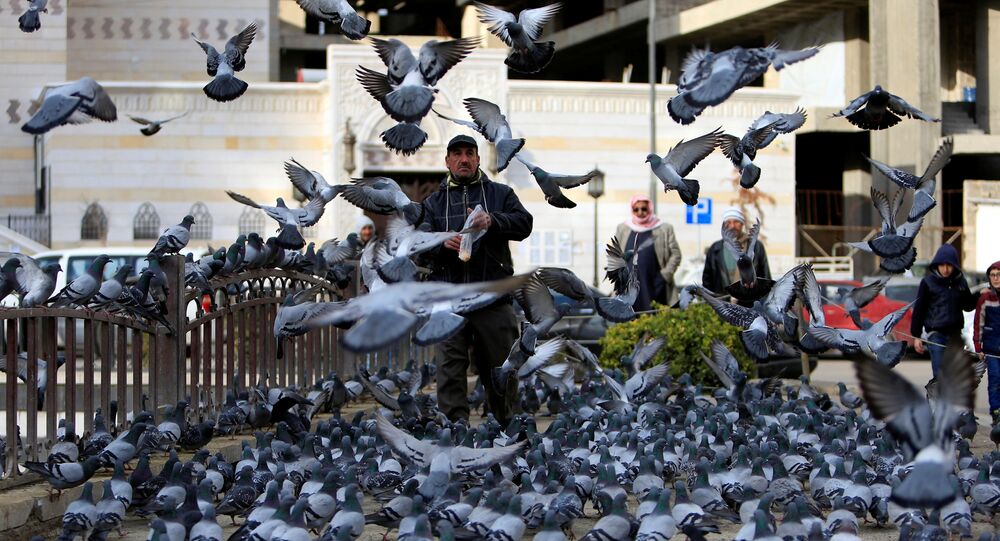 In an interview with correspondents Anastasia Levchenko and Elizaveta Isakova, UN Special Envoy for Syria Staffan de Mistura expressed hope for drastic changes on the ground in Syria by the end of the year.

Mr. de Mistura, summing up one of the previous rounds of negotiations here in Geneva, you said that "the train of intra-Syrian talks" started moving. Where is this train now, which stops is it passing, and where is it heading to?

Staffan de Mistura: The train has definitely left the station in the sense that the worst-case scenario for Syria could be being forgotten as a crisis and becoming like Somalia was for many years, and that was a problem that looks unresolvable.

Secondly, the train has left the station, because now world leaders are very much focusing together on what are the priorities, along which the Syrian crisis can be deconstructed from its complexity.

That's why a so-called simplification seems to be taking place. In that sense, the priority seems to be among everyone that fighting Daesh and re-conquering, liberating Raqqa and freeing the siege of Deir ez-Zor is an important joint priority.

And at the same time, de-escalation, humanitarian aid and demining and detainees. And in link to that — how you stabilize the country following that. The only way is through the political process.

© REUTERS / Denis Balibouse
US Ambassador, UN Envoy Discuss Syrian Political Path in Geneva
What we are doing, and that is why the train has been moving, is preparing for the moment when all of these will be more or less taking place.

The way to do it is to be preparing the opposition, which used to be very divided, and now for the first time is enable to have commonalities among them.

I could say that the opposition seems to be going towards the similar position on constitutional matters, but even more so on the 12 principles, points, which are the ones about the future of Syria.

Is this going to be an expectation of a breakthrough now? No. It's just being incremental.

2254 remains the guiding line, but we are now looking for a practical way to do it.

We have seen quite an incremental movement in the opposition by seeing them, instead of being divided, working in the same room with our team in order to try to find some common position. One year ago this was unthinkable. They were not even acknowledging each other.

Staffan de Mistura: It's too early to say that. Let's be careful with the wording. What we are seeing is a progress towards a common position of the opposition. But substance is important.

Last time, you launched technical of the UN team with Syrian sides on constitutional matters. They focused on method of drafting a new constitution, rather than on the essence of the reform. How will these discussions look like this time? Again only about the method, or something more?

Staffan de Mistura: A mediation technique is to prepare all sides about common points, particularly on how to proceed, was not obvious, and is becoming easier and easier. I think the way we have been operating, having a team, not me, at a slightly lower, technical level, to help the three opposition groups to actually sit together and see what are the common points.

I am not going to tell you today what they are, because they are still talking actually. But what I can tell you is that I was pleasantly surprised how many commonalities they can find, and they are not that far even from some of the points of the government side. Like sovereignty, unity, integrity, institutions that need to be protected and many more things.

So, I think there is a very mature approach at this stage, perhaps because they are detecting also that big countries, like Russia, the United States and others, are actually starting talking about how to end this conflict.

Are you going to invite the Kurds to take part in the ongoing technical discussions on constitutional matters?

Staffan de Mistura: The Kurds are an important relevant community. Syrian Kurds will have to have a righteous saying in what will be the future constitution, or changes of the current constitution.

© AP Photo / Hassan Ammar
New Ceasefire Agreement in Southwest Syria 'Significant Step' Toward Peace - UN
At the moment, we are having technical talks about schedule and process rather than the actual constitution. When the time comes, it will be very difficult to ignore the voice of the Kurdish Syrian community.

I am being constantly reminded that there are Kurds represented in the opposition.

We will cross the bridge when actually the constitution will become a drafting element among Syrians.

It is safe to say that when the Syrians start working among them regarding the future constitution, all parts and components of Syria will be and will have to be included.

Can these technical discussions be extended to the other three baskets of issues, or will they continue to be only about constitution?

Staffan de Mistura: Yes, they can.

They will not be only on this, but on all four baskets. I think that constitutional aspect is an important one, and I know that even in Astana there was a moment when Russia pushed very hard for it, and then rightly they acknowledged the fact that the best place to bring these political discussions is to Geneva, whereas de-escalation is very important to be done in Astana.

Are you still planning to hold two more rounds of talks in august and September? There are rumors that you might be leaving in October…

Staffan de Mistura: We intend to make sure that this work that we are doing, which is a preparatory work for the right moment, when we can perhaps really say we have now a peace conference in Geneva, will continue both in August and in September, and probably also in October and perhaps, frankly, in November. Because we hope that by the end of the year we will be having quite a different picture in Syria.

Geneva-7 Round of Syria Talks Kicks Off, Damascus Meets With de Mistura