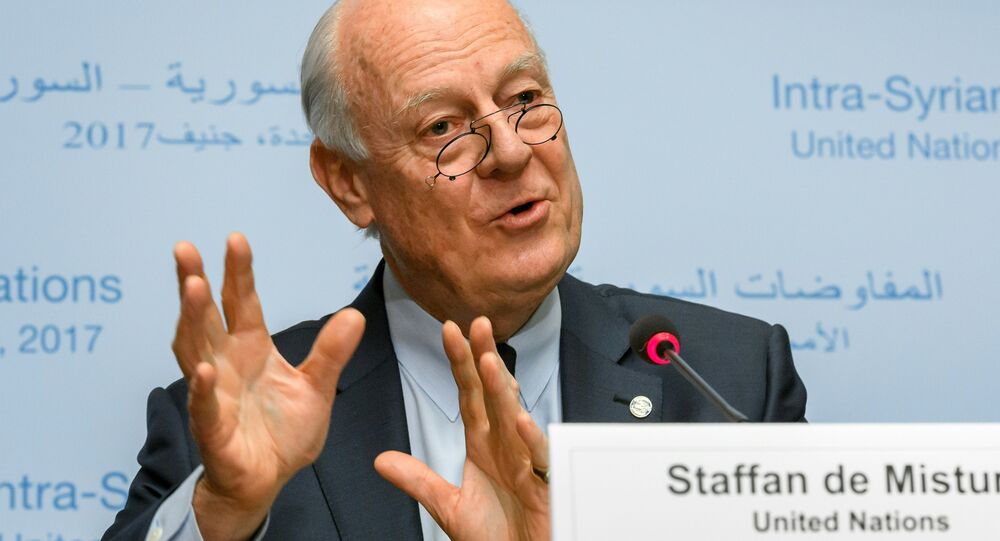 © REUTERS / Pierre Albouy
Ceasefire in Syria's Southwest Has All Chances to Be Implemented - De Mistura
GENEVA (Sputnik), Anastasia Levchenko — UN Special Envoy for Syria Staffan de Mistura believes Syrian opposition groups have achieved significant progress in coming closer together on the issues of Syria's future and constitutional reform, he told Sputnik in an interview, adding that the opposition's agenda is now not that far even from Damascus' points.

"I could say that the opposition seems to be going towards the similar position on constitutional matters, but even more so on the 12 principles, points, which are the ones about the future of Syria," de Mistura said.

The UN special envoy said he was pleasantly surprised with how many commonalities the Syrian opposition groups could find, adding that "they are not that far even from some of the points of the government side," such as sovereignty, unity, integrity and institutions that need to be protected, among many other things.

"So, I think there is a very mature approach at this stage, perhaps because they are detecting also that big countries, like Russia, the United States and others, are actually starting talking about how to end this conflict," de Mistura said.

© REUTERS / Xu Jinquan/Pool
De Mistura: Technical Process on Legal, Constitutional Aspects in Syria ‘Up and Running’
Moreover, despite the converging views of the opposition groups in Geneva, it is still too early to speak about actual unification of delegations, UN Special Envoy for Syria Staffan de Mistura added.

"We have seen quite an incremental movement in the opposition by seeing them, instead of being divided, working in the same room with our team in order to try to find some common position. One year ago, this was unthinkable. They were not even acknowledging each other," de Mistura said.

"Let's be careful with wording," de Mistura said, asked whether the coming together of the opposition groups' views can be seen as a de facto unification.

"What we are seeing is a progress towards a common position of the opposition. But substance is important," he added.

© REUTERS / Omar Sanadiki
This is Why New Ceasefire Deal is Crucial for Syria's Future
Technical discussions between the UN team and the parties to intra-Syrian talks in Geneva will be extended beyond the topic of the constitution to include other issues, specifically governance, anti-terrorism and elections, UN Special Envoy for Syria Staffan de Mistura told Sputnik in an interview.

"Yes, they can," de Mistura said, asked whether the ongoing technical discussions can be extended to cover other baskets of issues apart from constitution — namely, governance, elections and anti-terrorism.

"They will not be only on this [constitution], but on all four baskets," de Mistura said.

Besides, UN Special Envoy for Syria Staffan de Mistura intends to hold four more rounds of intra-Syrian talks in Geneva and is hopeful to see drastic changes on the ground by the end of the year.

"We intend to make sure that this work that we are doing… will continue both in August and in September, and probably also in October and perhaps, frankly, in November. Because we hope that by the end of the year, we will be having quite a different picture in Syria," de Mistura said.

Iran: US-Russia Ceasefire in Syria Should Extend to Entire Country