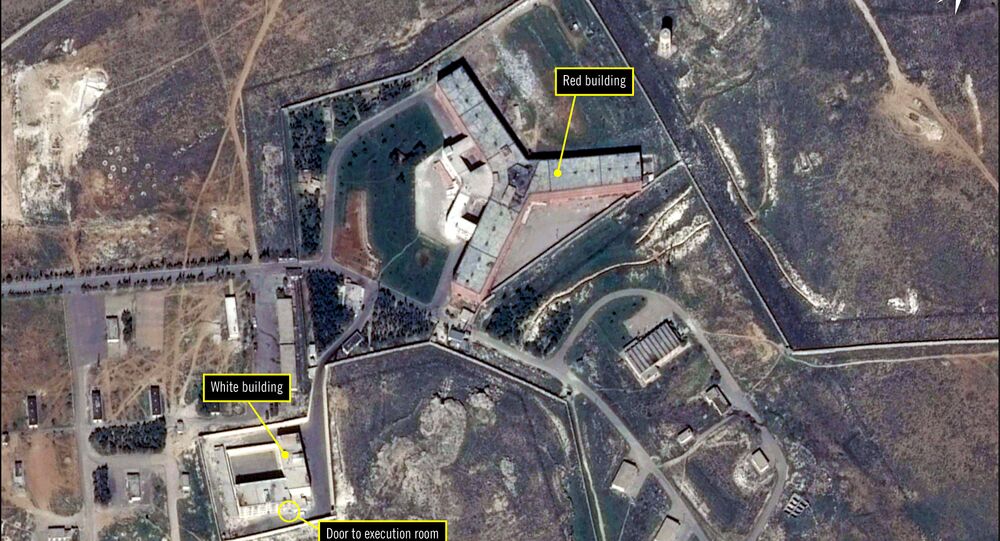 The Saydnaya military prison, located in close proximity to Damascus city, rose to notoriety after unrest erupted in Syria in 2011. The facility has since transformed into one of the main criticisms of the Syrian government's human rights stance, alongside its alleged use of chemical WMDs. Both of these allegations have been consistently denied.

Research has been carried out, to gain a better understanding of the prison. Human rights groups, such as Amnesty International, and various other organizations have obtained most of their information about Saydnaya prison from apparent former inmates.

This is perhaps the only practical, feasible method to examine it more closely. However, relying solely on testimony from ex-inmates, who usually speak on the condition of anonymity, greatly reduces the accuracy and trustworthiness of the reports and findings published by NGOs on this matter.

Amongst Syrians, the Saydnaya military prison is known to only house terrorists, not conventional criminals or other political opponents.

All notable prisoners have been, or are, allied to terrorist groups.

For example, the current governor of Daesh's self-proclaimed capital, Raqqa, was imprisoned in Saydnaya until 2011.

© AP Photo / Hassan Ammar
Amnesty Report on Syrian Prison Deaths Questioned by Ex UK Ambassador to Syria
This contradicts the claim made in Amnesty International's official press release for its 48-page report, published earlier this year, claiming that 13,000 prisoners, mostly civilians, were hanged at the prison.

Most — if not all — of the interviewed former inmates, whose testimonies have been central to the findings of Amnesty International and others, claim to have been imprisoned in Saydnaya for engaging in peaceful protests, or other forms of political activism.

Given the fact that most of the interviewees no longer live in Syria, with many residing in either the US or Europe, there is a clear incentive for them to deny their former ties to terror groups operating in Syria.

They would face imprisonment or potential deportation if these ties came to light, so they choose to play the "activist card" instead, as it is likely to be met with a much warmer reception.

Amnesty International, and the dozens of media outlets who covered the publishing of the report, titled Human slaughterhouse: Mass hangings and extermination at Saydnaya prison, Syria, brandished the claim that 13,000 prisoners had been executed at the facility.

Deep within the report, it is revealed that this figure was calculated based on unreasonable, far-fetched extrapolation. Even the original data which the entire extrapolation is reliant on is an estimate, based on the number of slippers outside a room on one particular day. This casts doubt over the whole report.

In a recently published article in the Guardian, an apparent former inmate outlines some of the horrors he witnessed, before subsequently being released in October 2015.

"I saw many executions. A guard held his foot on the neck of a detainee to suffocate him to death. Another was given an 'air injection' of poison… In October 2015, after 10 months of detention, I won my freedom," the article reads.

© REUTERS / SANA/Handout
Assad Resolutely Opposes Amnesty International Observers' Visit to Syria
It's questionable as to why he would be released after he'd witnessed such crimes, and alleged breaches of human rights.

Despite the fact that many of the claims about Saydnaya prison may be exaggerated or inaccurate, it's still almost certain that some pro-government forces have breached human rights law, even if such practises are not officially permitted by the Syrian government and President Bashar al-Assad.

It is also fair to assume that every party involved in the Syria conflict has also employed torture techniques, with many opposition groups officially endorsing it.

Although it has been claimed that the prison is used by the Syrian government to crush all political opponents, it actually serves a similar purpose to the US' controversial Guantanamo Bay detention camp, tackling terrorism to bolster national security.

Despite this, the existence of both prisons remains to be a contentious topic.

Given the difficulties associated with reporting on this facility, claims should not be taken at face value, as the methods employed to deduce and arrive at such claims and statistics are often flawed.