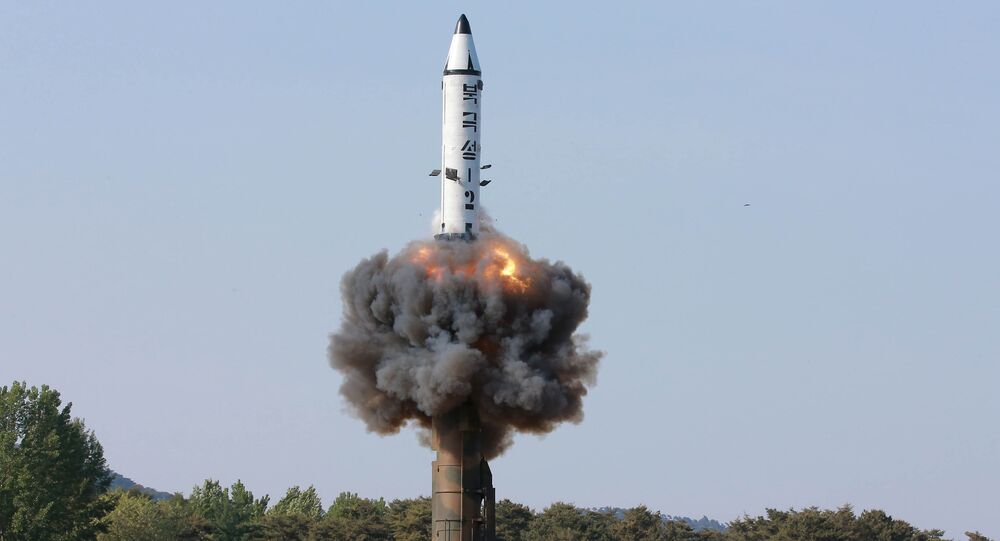 North Korean media on Wednesday blasted a US plan to station intermediate-range missiles in the region, accusing it of trying to spark a new Cold War. However, the socialist state’s new artillery rocket system might give it a leg-up in that arms race.

INF Treaty Out, Missiles In

Earlier this month, US Defense Secretary Mark Esper noted the Pentagon’s plan to deploy intermediate-range missiles with conventional warheads to the Asia-Pacific region. That same day, August 2, the US officially left the Intermediate-Range Nuclear Forces (INF) Treaty, an agreement with Russia that had barred such land-based weapons since 1987.

“It's about time that we - we were unburdened by the treaty and allowed to pursue our own interests, and our NATO allies share that view as well,” Esper told reporters en route to Sydney. “Sooner rather than later, we want to develop this capability and making sure we can have long range precision fires, not just for that theater, but for the theater that we're deploying to as well, because of the importance of great distances we need to cover, and how important an intermediate range conventional weapon would be to the Asia Indo-PACOM theater.”

Beijing immediately raised issue with the proposal, with Chinese Foreign Ministry spokeswoman Hua Chunying warning that “China will not just sit idly by and watch our interests being compromised … we will not allow any country to stir up troubles at our doorstep. We will take all necessary measures to safeguard national security interests.”

However, Seoul has tried to distance itself from Esper’s plans. South Korean Defense Ministry spokesperson Choi Hyun Soo told reporters on Tuesday the ministry had “not internally reviewed the issue and [has] no plan to do so.”

THAAD and Its Discontents

Also on August 2, the Seoul-based Yonhap News Agency reported that construction had begun on new accommodation facilities for US and South Korean troops at the Terminal High-Altitude Air Defense (THAAD) base in Seongju, in the country’s southern North Gyeongsang Province. The report noted that US Forces Korea would be transporting goods to the missile defense battery site using helicopters, in order to circumvent the angry villagers whose resistance movement paralyzed development of the site in 2017 and 2018.

“The complete deployment of ‘THAAD’ and the attempt to deploy the surface-to-surface intermediate-range missiles further degenerates South Korea into a dangerous nuclear advance base which destroys the peace and stability of the Korean peninsula and the region,” Rodong Sinmun, the newspaper of the Democratic People's Republic of Korea’s (DPRK) ruling Korean Workers Party, said Wednesday.

KCNA noted that THAAD is “pursuant to the US strategy to contain great powers and hold supremacy in Northeast Asia, not the one for ‘shielding’ South Korea from someone’s ‘threat.’”

The presence of the air defense system in South Korea has been a persistent worry for Beijing as well. The missile system’s powerful AN/TPY-2 high altitude radar has an exceptionally long range: according to statements by US officials, it can track a “baseball from about 2,900 miles (4,600 kilometers) away,” meaning the Seongju battery can see as far away as the Chinese city of Kashgar in the western Xinjiang Province. However, system manufacturer Raytheon claims a mere 600-mile range.

On July 25, Dong-a Ilbo reported that Beijing said in a recent Defense Ministry white paper that THAAD had “gravely damaged” the strategic balance in the Asia-Pacific region.

THAAD is intended to provide ballistic missile defense, intercepting the high-arcing projectiles as high as 93 miles above the surface. However, it’s basically useless against lower-altitude rockets - such as those short-range missiles that have been tested by the North Korean military over the last few weeks.

Foxtrot Alpha, the Gizmodo Media Group’s defense tech outlet, noted Monday that the missiles the DPRK fired into the Sea of Japan in a set of tests flew roughly 155 miles and reached an altitude of only 19 miles. That’s just under the minimum altitude THAAD can target, and nearly far enough to reach the Seongju site.

Seoul has said it’s “several steps ahead of North Korea” and has the capacity to shoot the projectiles down with Patriot missile systems bought from the US, but that air defense system also has a patchy record of performance in combat situations.

While Pyongyang has made no formal announcement about the weapon’s name, it’s described the "new-type large caliber multiple launch guided rocket system” as being "an inescapable distress to the forces becoming a fat target of the weapon." South Korean observers have identified it as KN-23, a road-mobile rocket launcher first seen in a February 2018 military parade in Pyongyang, but only fired for the first time this past May.

KCNA hinted at this possibility Wednesday, making an appeal to South Korean nationalism against the impositions of the Pentagon, which in a time of war assumes control over South Korean forces.

“Now lots of countries around the world opt for defending their own sovereignty and national interests. So it is foolhardy to act as a war servant while offering outsiders a stupendous amount and allowing its land to be used as a theatre of nuclear war,” KCNA said.

“The South Korean authorities should meditate before it becomes too late what its blind act of submission will bring,” KNCA advised. “They have two options, becoming a bullet-shield to meet self-destruction or removing trouble-makers that bring disasters only.”

However, Seoul is also continuing its own military buildup, throwing down massive investment in new weapons systems and naval vessels, from ballistic missile submarines to light aircraft carriers and AEGIS destroyers. It’s also been more than happy to participate in war drills with US forces, which North Korean leader Kim Jong Un has insisted violate the June 2018 agreement on their cessation.

US President Donald Trump has signaled that peace talks with Pyongyang could resume as soon as the exercises are completed.