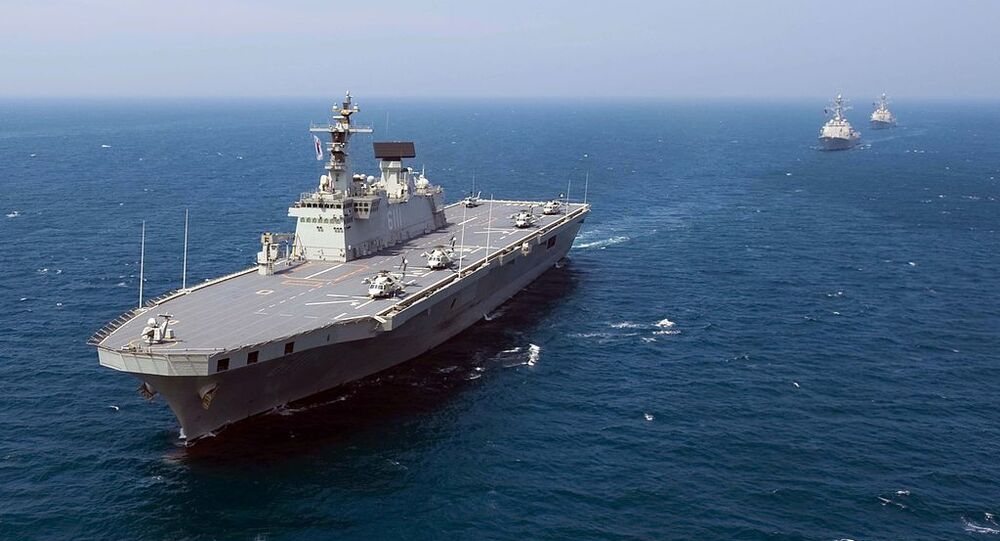 Seoul plans to have a landing platform helicopter (LPH), a type of light aircraft carrier, in the water in the next 10 years, a government insider told Defense News for a Tuesday article. The news comes amid a massive South Korean fleet buildup aiming at a blue-water navy.

The new ship will have roughly 30,000 tons of displacement - that’s roughly the size of the US Navy’s Tarawa-class Amphibious Assault Ships (AAS), and twice the size of the Republic of Korea Navy’s two existing LPHs.

“The plan of building the LPH-II ship has been included in a long-term force buildup plan,” a spokesperson for the South Korean Joint Chiefs of Staff told Defense News anonymously. The spokesperson said the decision was reached in a July 12 meeting of South Korean military leaders.

“Once a preliminary research is completed within a couple of years, the shipbuilding plan is expected to be included in the midterm acquisition list,” the spokesperson noted.

Seoul presently operates two LPHs of the Dokdo class - Dokdo and Morado - neither of which displace more than 18,000 tons of water fully loaded, and the latter of which just began sea trials last month. Like their AAS cousins, Dokdo and Morado carry several hundred marines, several land vehicles and several landing craft, and can operate up to 10 vertical-takeoff aircraft from their flight decks, such as helicopters or F-35Bs. Seoul’s bought 40 of the new stealth aircraft from the United States and could potentially buy 20 more.

I found something really cool using ELM-2248 (MF-STAR) the Dokdo-class amphibious assault ship, with a price tag of US$ 288 million
With several F-35B instead of helicopters, you have Aircraft carrier on the cheap, without even speaking about amphibious lahttps://t.co/Orq4zWNsGH pic.twitter.com/hwKPJNFXxG

​This new vessel, though, would be able to hold 3,000 marines, 16 aircraft and 20 armored vehicles, and would have a ski jump on the bow of the ship, similar to the British Royal Navy’s Queen Elizabeth-class or the Russian Kuznetsov-class aircraft carriers.

South Korea’s neighbor, China, also uses aircraft carriers with ski jumps, derived from the Kuznetsov-class, and much larger than even Seoul’s anticipated LPH. However, the new ship will be slightly larger than Japan’s Izumo-class helicopter destroyers, which displace about 27,500 tons of water.

The Republic of Korea Navy has been in the process of expanding toward a blue-water navy since then-South Korean President Kim Dae Jung recognized it as a goal in 2001. Sputnik reported in May that the Defense Acquisition Program Administration had signed off on a $6.3 billion to order three more KDX-III Sejong the Great-class guided missile destroyers and three more KSS-III diesel-electric attack submarines. Seoul plans to order nine of the submarines, which will be capable of launching ballistic missiles.

Last November, Daewoo Shipbuilding & Marine Engineering was awarded a $535 million contract to build six more heavily updated Incheon-class frigates, which will be known as the Daegu-class.