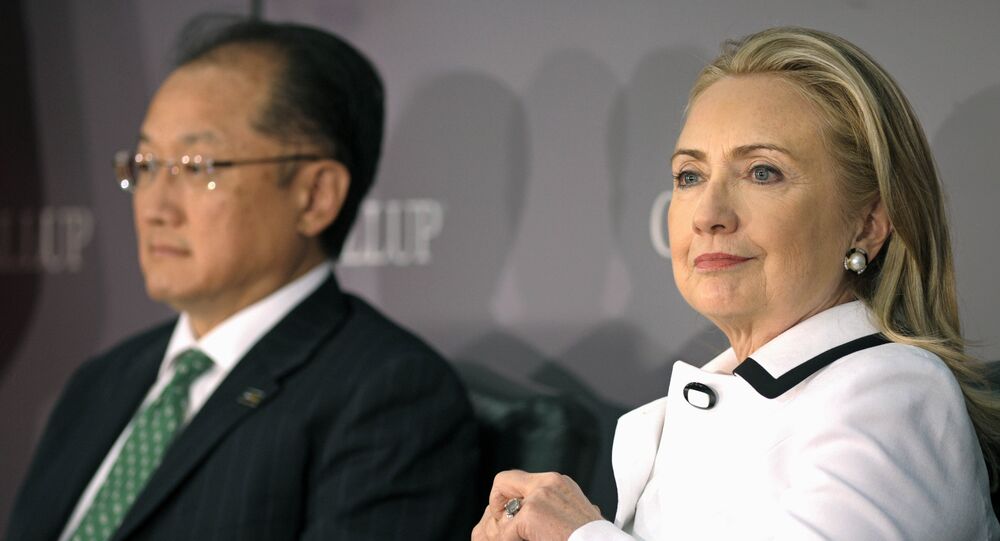 World Bank President Jim Yong Kim's decision to resign came out of the blue, as in early September 2018 he seemed willing to finish his second term which was due to expire in 2022, Wall Street and investigative journalist Charles Ortel told Sputnik.

"In early September 2018, Kim sat down for an extended interview with Carlyle Group founder David Rubinstein on Bloomberg TV", Ortel said. "In this interview, Kim seemed eager to serve out his second term, asserting the need to continue the progress he had seen with World Bank colleagues since 2012, when he began his first term as World Bank President".

Apparently, Dr Kim's choice is as simple as a compelling opportunity materialising that he just could not resist, the Wall Street analyst presumed, referring to the outgoing president's intent to join a private-sector infrastructure investment fund.

I will be stepping down as @worldbank Group president on February 1. It’s been the greatest privilege I could have ever imagined to lead the dedicated staff of this great institution to bring us closer to a world that is finally free of poverty. https://t.co/jWGoihu7tu

​However, there is more to Dr Kim's line of work than meets the eye, Ortel says.

© REUTERS / Brian Snyder
FBI Memo Implies Dossier on Trump Russian Collusion Funded by Clinton
The investigative journalist pointed out that Dr. Kim's walk of life had been closely interwoven with the Clinton family and their charity, which is the subject of Ortel's private investigation.

According to the Wall Street analyst, not only the Clinton Foundation but also Kim's PIH deserves careful scrutiny.

"As I am doing with Clinton charities, I have begun researching the likely true origins of Partners in Health, starting first in Haiti, and I wonder whether that organisation was organised lawfully and operated thereafter lawfully, in full compliance with US, Massachusetts, and other state laws and regulations pertaining to charities", he said.

Additionally, the investigative journalist noted that at that time "treatment techniques pioneered in Haiti by Farmer, Kim and others" had been presented "as a template in economically disadvantaged nations worldwide". According to Ortel, this assumption raises questions.

"Considering that Haiti's population and infrastructure are different than many nations in Africa, Asia, and elsewhere makes me wonder just how rigorous the work of Kim and Farmer has been during the period from 2001 forward, when tens of billions of dollars (even more) has been rushed to finance global health projects that do not seem to have been supervised closely enough", he highlighted.

The analyst added that the Clinton Foundation and PIH cooperated closely: "Chelsea Clinton went on PIH Board and Farmer was on Clinton Health Access Initiative (CHAI) Board", he recalled.

READ MORE: 'Lock Her Up': Untold Story of Hillary Clinton's Disgrace in Haiti

Kim and WHO 'Overlooked' the Clintons' Alleged Fraud

Likewise, there is something suspicious, according to the investigative journalist, about Dr Kim's work as an adviser to the director-general of the World Health Organisation (WHO) from 2003 to 2006. In March 2004, he was appointed director of WHO's HIV/AIDS department.

"I do not believe enough attention has been paid to the period starting in 2003, when Dr. Kim worked with the World Health Organisation, and also interacted with the Clinton Foundation. Between 2003 and 2009, in my view, the Clinton Foundation illegally solicited and raised hundreds of millions of dollars to 'fight HIV/AIDS internationally', including about $300 million from UNITAID, a non-governmental organisation housed within WHO", Ortel opined.

The investigative journalist suggested that "smart as Dr Kim must be, he and/or his WHO colleagues seem to have 'overlooked' glaring defects in the Clinton Foundation legal structure and public filings that should have disqualified the Clinton Foundation from receiving one penny from UNITAID, nominally being 'supervised' by WHO".

Barack Obama's choice of Dr. Kim as the next World Bank head was largely seen as "surprising": Forbes noted at that time that Kim, a Korean-American physician and anthropologist, broke "the mould of prominent bankers, lawyers, and political officials who have headed the international development and financial assistance institution since it was founded in 1944".

According to Devex, a social enterprise and media platform for the global development community, Kim owed Hillary Clinton for his sudden rise: "Clinton's support for Kim has been one of his selling points to World Bank board members", the media platform highlighted, citing former World Bank staffer Hafed Al-Ghwell.

The Clintons' "ally's" decision to step down has seemingly given left-leaning MSM the shivers as the organisation's next president can be appointed by Donald Trump.

While Quartz presumed that "US President Donald Trump's well-publicised scepticism of multilateral institutions may make the [World Bank] board hostile to his choices", Vox insisted that the World Bank's next leader "shouldn't be American".

The Wall Street analyst emphasised that "in principle, the World Bank (including its various subsidiaries and affiliates) might do much to improve living conditions, particularly in the poorest nations… yet in practice, the World Bank (like most multilateral organisations) is not effectively regulated by bodies that are equipped and empowered to root out waste, inefficiencies, and corruption".

© REUTERS / Brian Snyder
How Clinton Charity's Trustees, Donors May Find Themselves in Heap of Trouble
To illustrate his point, Ortel referred to the international institution's effort to fight "global warming". The analyst questioned studies and analyses that force nations to pour billions of dollars in the initiative.

"What time scale should such studies consider? Mere decades, a century, or much, much longer? After all, earthquakes, volcanoes, and other geologic events certainly have massive impacts on Earth's climate that cannot be fairly blamed on human activities. Moreover, what of the Sun's likely impact upon Earth's climate (and on that of other planets)?" the investigative journalist asked.

According to the Guardian, Dr. Kim planned to make about $200 billion available to fund activity targeting climate change from 2021-25.

"I suspect the Trump Administration will likely not endorse creating and funding yet another potentially unregulated global bureaucracy, especially should such an entity attack, without profoundly compelling arguments, industries and activities that are central to the present economic health of energy producing nations including the United States, Russia, and others", the Wall Street analyst presumed.

He underscored that "like most Americans, President Trump likely wishes to see the World Bank concentrate on productive projects that truly do increase opportunities for residents in the most economically disadvantaged nations of the world".

"The one sector of global economic activity that cries out for being 'disrupted' is unregulated globalism through entities including the World Bank — count on that happening, for the better, so long as Donald Trump remains US president", Ortel concluded.