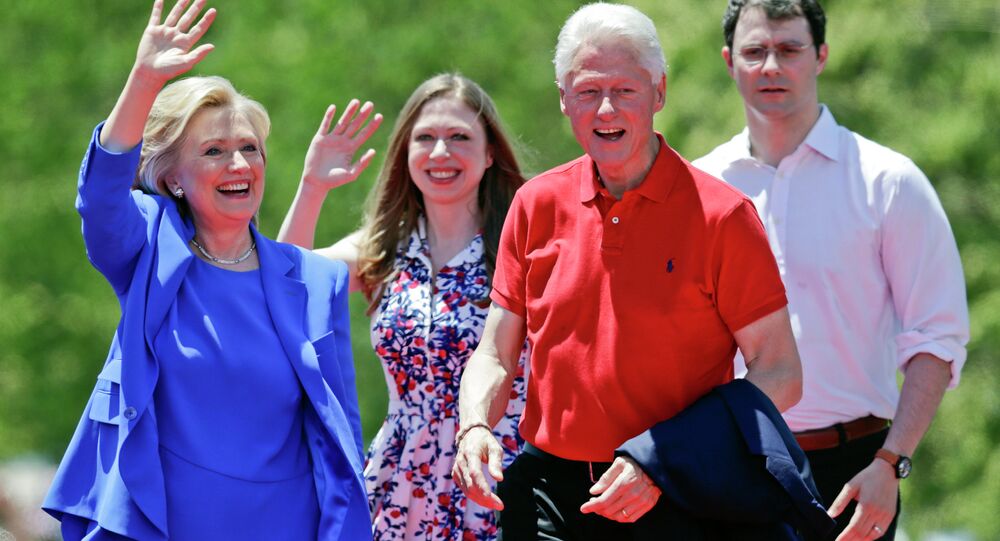 Over the past two decades the Clintons have created nothing short of a global network consisting of influential foreign politicians, oligarchs and royalty, exercising what Wall Street analyst Charles Ortel called "the cult of unregulated globalism." The fall of the House of Clinton may bring an end to this globalist structure, he told Sputnik.

"The Clintons — and the Bushes and Obamas — have embraced the cult of unregulated 'globalism' wherein a small band of cronies drawn from the billionaire class, multinational companies, international nonprofits, academia, and media swarm around the world trying to dominate the political agenda, as they move financial markets, and put deals together," Charles Ortel, a Wall Street analyst and investigative journalist, told Sputnik.

According to the analyst, this approach gained momentum starting around 1988 and allowed globalist elites to build even greater fortunes out of being able to control any national government.

Over the past two decades the Clintons have managed to create a sort of a global network involving prominent foreign politicians, tycoons and powerful clans. Many of them have long been generous donors to the Clinton Foundation, dubbed by Ortel, who has been conducting a private inquiry into the entity for the last few years, the "largest unprosecuted charity fraud ever attempted."

Given the changing political landscape in the US it is possible that the Clintons will be finally subjected to thorough scrutiny.

Everybody is asking why the Justice Department (and FBI) isn't looking into all of the dishonesty going on with Crooked Hillary & the Dems..

​"Everybody is asking why the Justice Department (and FBI) isn't looking into all of the dishonesty going on with Crooked Hillary & the Dems.. New Donna B [Brazile] book says she paid for and stole the Dem Primary. What about the deleted E-mails, Uranium [deal], Podesta, the Server, plus, plus," US President Donald Trump tweeted on November 3.

…New Donna B book says she paid for and stole the Dem Primary. What about the deleted E-mails, Uranium, Podesta, the Server, plus, plus…

​Will the fall of the House of Clinton trigger the domino effect, affecting their longstanding cronies worldwide?

According to the Wall Street analyst, it is quite probable.

Saudi Arabia: Is Crown Prince Getting Rid of the Clintons' Cronies?

Meanwhile, in Saudi Arabia, Crown Prince Mohammed bin Salman who presides over the newly created anti-corruption committee arrested 11 princes, including Prince Alwaleed bin Talal, one of the world's richest people, who is known to be a Clinton Foundation donor and Trump's antagonist.

On December 2015 the prince tweeted: "@realDonaldTrump You are a disgrace not only to the GOP but to all America. Withdraw from the U.S presidential race as you will never win."

.@realDonaldTrump
You are a disgrace not only to the GOP but to all America.

Withdraw from the U.S presidential race as you will never win.

© REUTERS / Brian Snyder
How Clinton Charity's Trustees, Donors May Find Themselves in Heap of Trouble
However, from October 23, 1997 through December 31, 2016 the Clinton Foundation have not made proper disclosures, so it was hard for US authorities to identify suspicious contributions by foreign entities, he stressed.

"The sweeping moves by Saudi Arabia are quite encouraging. Members of the government and business leaders backed by their government likely have extensive information that will help flesh out how much money may have been sent towards the Clinton Foundation, by what means, and to which bank accounts and offices," he suggested, adding that "other nations may already be following Saudi Arabia's example, or start doing so in the coming days, weeks, and months."

The Ukrainian oligarch, Victor Pinchuk, a son-in-law of former Ukrainian President Kuchma, may also be brought into spotlight.

"The Clinton Foundation began working inside Ukraine with Victor Pinchuk (and with his wife [Elena Pinchuk]) around 2004 or 2005, yet never validly has accounted for its activities inside that nation, or explained where it may have sourced medicine and test kits that "Clinton Foundation HIV/AIDS Initiative" ("Old CHAI") used, in theory, to "fight HIV/AIDS," Ortel remarked.

© REUTERS / Lucy Nicholson
Pay to Play? How the Clintons Longstanding Ukrainian Donor Allegedly Sponsored Hillary's Run
Besides, Pinchuk's generous donations to the Clintons have repeatedly prompted suspicions about the potential conflict of interest.

In 2011 the oligarch hired Doug Schoen, "a top Democratic pollster who helped engineer President Bill Clinton's reelection in 1996," to help "share [Pinchuk's] views on democratization in Ukraine and European integration and to solicit the views of American policy makers on those subjects," as The Hill reported.

In September 2013, just two months before the beginning of the Euromaidan Revolution in Ukraine, the 10th Yalta Annual Meeting organized by Pinchuk took place in Crimea. The forum was entitled "Changing Ukraine in a Changing World: Factors of Success." Ex-President Bill Clinton was among the forum's special guests.

A year after the February 2014 coup in Kiev, Pinchuk, who was "feeling a great degree of pressure and pain for his many years of nurturing stronger ties with the West," "relentlessly" sought to meet Bill Clinton wanting him to "show support for Ukraine," as one of the Podesta emails released by WikiLeaks indicated.

It appears that currently Pinchuk is trying to establish close ties with the US right-wing bloc by hiring conservative commentator Monica Crowley as his lobbyist in March 2017. However, according to Ortel, that won't help the oligarch or the Clintons to keep the alleged conflict of interest and mismanagement of funds under the rug.

Canada: The Trudeaus and the Clintons

Prime Minister of Canada Justin Trudeau is yet another prominent politician with ties to the Clintons: "My sources confirm that the Trudeaus have long been close to the Clintons — in fact, there is a Trudeau Foundation in Canada (perhaps modeled in recent years on the Clinton Foundation) that has grown much larger as Justin emerged and assumed power as Prime Minister," the Wall Street analyst pointed out.

"Canadian citizens need to ask their government to account for taxpayer funded contributions to these false-front Clinton 'charities'," the analyst noted.

French Gov't Turned a Blind Eye to the CHAI Controversy

© AP Photo / Matt Dunham
Why Foreign Gov'ts Seem Reluctant to Expose Clintons' Alleged Fraud
Similarly, the investigative journalist raises questions why under Presidents Jacques Chirac and Nicolas Sarkozy "so much money would have flowed from France into UNITAID [a global health initiative], and then from UNITAID to the illegally organized and operated Clinton Foundation HIV/AIDS Initiaive, Inc. ('Old CHAI') from late 2006 through December 2009 even though Old CHAI had its operating authority revoked involuntarily (a serious problem) by the Commonwealth of Massachusetts on March 31, 2008 with effect from December 31 2007."

"Curiously, the French government funded Old CHAI and Clinton Health Access Initiative, Inc. ('New CHAI') via UNITAID to the tune of hundreds of millions of dollars without seeming to care about how little of these sums may actually have achieved intended purposes of fighting HIV/AIDS involving children and involving persons who needed 'second-line' HIV/AIDS drugs to treat more difficult cases," Ortel highlighted.

As for Indian elites, "too many persons connected to the Clinton Foundation and to American India Foundation (with Bill Clinton as its Honorary Chairman), sadly, seem to be tied to actual or alleged frauds," the Wall Street analyst noted, adding that "a former icon of the India-American community, Rajat Gupta, worked closely with Bill Clinton and with Bill Gates in 'charitable' activities around the world."

© REUTERS / Lucy Nicholson
#LockThemUp: What Went Wrong for Clinton Foundation's HIV/AIDS Initiative
In 2012, former Goldman Sachs Director Rajat Gupta was convicted of insider trading in the US and later ordered to pay a $13.9 million civil penalty.

Commenting on the proven and alleged deceit cases, Ortel referred to Indian firm Ranbaxy and "other Indian vendors of generic HIV/AIDS medicine that the Clinton Foundation selected as suppliers to its various health initiatives deserve careful scrutiny."

In May 2013 Ranbaxy Laboratories LTD was found guilty of selling ineffective, adulterated drugs to HIV/AIDS sufferers.

"The facts are out there," Ortel said, "the chief question is when will government authorities dig in to ferret out how much fraud may have been committed in the guise of charity?"

"Across the political spectrum, and around the world, only the worst sort of person is in favor of charity fraud. And, only the meanest among us divert funds intended for deserving victims, for their personal enrichment or for their political advancement," the Wall Street analyst concluded.