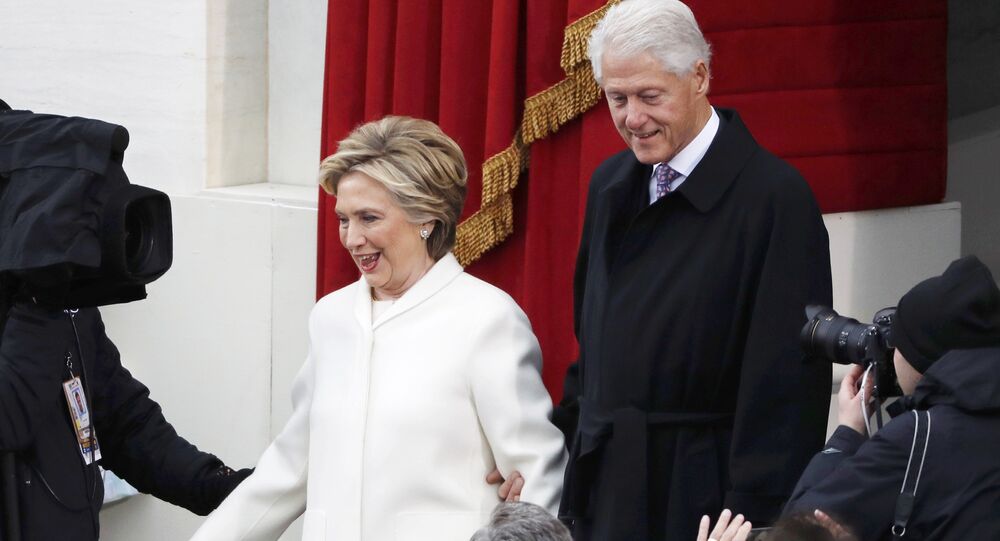 One of the Clinton Foundation's most controversial endeavors, the HIV/AIDS initiative, was never organized or operated lawfully at any time, Wall Street analyst Charles Ortel told Sputnik. There is no evidence that can be verified that the 'international' charity ever lawfully provided any help to victims of HIV/AIDS anywhere, he stressed.

Charles Ortel, a Wall Street analyst who discovered that General Electric stock was overvalued before the market crash in 2008, continues his investigation into the Clinton Foundation's alleged fraud.

One of the Clintons' most discussed and most controversial endeavors was the HIV/AIDS initiative dubbed CHAI (The Clinton Health Access Initiative).

The charity's site says that the initiative was aimed at "helping save the lives of millions of people" living with Acquired Immune Deficiency Syndrome (AIDS) and Human Immunodeficiency Virus (HIV) in the developing world "by dramatically scaling up antiretroviral treatment."

Still, there was something dubious about the initiative from the very beginning, the analyst notes.

Something Went Wrong From the Very Beginning

In his January interview with Dady Chery, News Junkie Post Co-Editor in Chief and DadyChery.org editor, Ortel pointed out that the Clinton Foundation's largest operation — the HIV/AIDS initiative — was "never organized or operated lawfully at any time."

"Under US law, a nonprofit corporation must serve carefully-defined purposes exclusively that actually are 'tax-exempt' if it wishes to qualify and afford donors the ability to deduct contributions made from their federal income tax returns," Ortel told Sputnik, commenting on the issue.

© REUTERS / Carlos Barria
#LockHerUp: Hillary Clinton Gradually Losing Veneer of Being 'Too Big to Jail'
"In addition, a federally tax-exempt nonprofit corporation must check with individual state laws and comply with these if it wishes to offer donors the further chance to deduct contributions from their state income tax returns," he said.

The Clinton Foundation — first called The William J. Clinton Presidential Foundation — was organized for the tax-exempt purposes of operating a presidential archive and research facility in Little Rock, Arkansas, the analyst recalled.

"These tax-exempt purposes are set forth in the Articles of Incorporation, which have never been amended to expand such purposes to include 'fighting HIV/AIDS internationally'," he highlighted.

He pointed out that in accordance with US law, a charity's activities should be transparent for both the government and the public — something that the Clinton Foundation could never boast.

Furthermore, US charities wishing to operate internationally and to offer donors the valid right to deduct contributions supporting these activities usually must comply with even stricter regulations than those that apply to American charities working on US soil.

"Never having amended its Articles of Incorporation, using persons whose roles are not clearly defined and explained and failing to report the financial consequences of activities (inside and outside the United States) are each fatal flaws  in any argument asserting that the Clinton Foundation HIV/AIDS Initiative was, at any time, legally organized, anywhere," Ortel stressed.

However, it was only the beginning.

To tackle the HIV/AIDS problem, the Clinton Foundation declared its commitment to provide lifesaving treatment to millions of people, mostly in developing countries. That pledge required a dramatic reduction in the cost of HIV and AIDS drugs.

At the same time, the Clintons had made every effort to receive substantial funding for their project from both domestic and foreign sponsors.

However, there is no information on whether or not the Clinton Foundation had a well-trained medical staff to kick off its HIV/AIDS initiative.

"It is possible that the Clinton HIV/AIDS effort used some qualified medical professionals to direct its supposed work from July 2002 forward but so far the Clinton Foundation has refused to provide required evidence to the general public," Ortel noted.

"Bill Clinton has legendary capabilities to raise money, but no specific experience leading international health care efforts and no medical credentials," he remarked.

Likewise, the analyst emphasized, there is no evidence of any kind concerning the testing of HIV/AIDS drugs distributed by CHAI in the period from July 2002 through March 23, 2004 and no concrete evidence anyone can verify that the parent Clinton Foundation was legally in position to control the HIV/AIDS Initiatives anywhere in the world.

Twitter: RT_America
Emailgate: Untold Story of Clinton Foundation's Ties With Defense Contractors
"Surprisingly, federal, state and international regulators have yet to make an issue of these seemingly bold violations of applicable laws," he noted.

And here is the rub, because one of the Clinton Foundation's most endorsed suppliers of HIV/AIDS medications — Indian firm Ranbaxy Laboratories Limited — was later found guilty of selling ineffective, "adulterated" drugs to its customers.

"In theory, the antiretroviral (ARV) drugs distributed as part of CHAI's 'work' were generic, rather than branded versions, and manufactured chiefly in India but also in South Africa using 'active pharmaceutical ingredients' made primarily in China," he said.

However, Bill Clinton has never cast doubt on the quality of Ranbaxy's medication regardless of the fact that in August 2004 Ranbaxy's three main antiretrovirals were removed from the World Health Organization's (WHO) prequalification list. Moreover, the US President's Emergency Plan for AIDS relief (PEPFAR) dropped the Indian firm from its recommended list in 2008.

What is even more surprising is that a month before the US Department of Justice finalized its lengthy investigation, with Ranbaxy pleading guilty of manufacturing and distributing adulterated drugs, Bill Clinton praised the firm for its "stellar contribution" to the Clinton Foundation's "fight" against HIV/AIDS.

"I fail to understand why, and why Bill Clinton has continued to defend this firm's diabolical public record," the Wall Street analyst told Sputnik, commenting on the matter.

"This behavior is even more curious when you understand that the Clinton Foundation apparently signed an agreement by October 2003 to promote the sale and distribution of Ranbaxy drugs, that Rajat Gupta (then a senior McKinsey consultant) apparently was compensating Bill Clinton and reimbursing the Clinton Family for expenses via an entity called Mindspirit LLC from 2002 through 2008, and that McKinsey and McKinsey executives had close working ties to Ranbaxy and to others in the generic pharmaceutical industry," Ortel elaborated.

Did the Clintons' Effort Bear Any Fruit?

Given the above, the question arises whether there is any official evidence that the Clinton Foundation's efforts to fight HIV/AIDS have borne any fruit?

"I'm proud of the foundation. I'm proud of the work that it has done. Nine million people have lower cost HIV/AIDS medicine because of the work of the Clinton Foundation my husband [Bill Clinton]," former Democratic presidential candidate Hillary Clinton told CNN on June 8, 2016.

But the devil is always in the details: Ortel argues that the evidence he had seen "suggests that this claim is absurd."

According to the analyst, the sums claimed on Clinton Foundation filings for 'pharmaceuticals' are a tiny fraction of the annual cost of treating nine million HIV/AIDS patients, and a nanoscopic portion of the cumulative cost of treating however many patients may have been treated since 2002.

© Flickr / Chris Wieland
Mysterious #Vault7: What Secrets is WikiLeaks Due to Release?
To add to the controversy, the problem is that the so-called antiretroviral treatment (ART) is not a cure for the deadly disease, it only may (or may not) keep HIV under control by arresting the weakening of HIV/AIDS patients' immune systems.

On the other hand, the non-efficient adulterated ARVs could have had a harmful impact on their health potentially increasing patient mortality rates.

Meanwhile, "when you compare amounts disclosed by major governments and foundations as having been sent towards the Clinton Foundation with disclosures in [the charity's] documents concerning direct expenses for 'pharmaceuticals' from 2002 through 2015 (and here I include all known Clinton Foundation entities), you find that the Clinton entities appear to have spent hundreds of millions of dollars less directly on 'pharmaceuticals' than well-intentioned donors claim they sent," the Wall Street journalist emphasized.

"It appears to me, that donations were likely used to cover overhead and for purposes other than those intended which is normally viewed as a serious problem that can lead to stiff legal penalties and sanctions, including imprisonment," Ortel told Sputnik.

"So, call me a stickler, but I see no evidence that can be verified of a theory that the Clinton Foundation lawfully provided any help anywhere to victims of HIV/AIDS internationally," he said, "More likely, efforts associated with the Clinton Foundation may have cause grievous harm, particularly to those who may have received adulterated ARVs, should this have happened from 2002 forward."

Why the Real Record of the Clinton's Charity Should be Exposed

Furthermore, according to the report, former President Bill Clinton "was personally enriched with million dollar consulting contracts by a friend of convicted felon, and Ranbaxy advocate, Rajat Gupta from 2002-2008."

"It seems to me that the Clintons have used the cover of their celebrity and political connections successfully to argue, until now, that any complaints against the Clinton Foundation are just political," Ortel said.

"For the benefit of the many US and foreign charities that do try to help around the world, we need to expose the real record of the Clinton 'charity' network, and then cause those who have run it to defend their behavior using hard, independently verified facts," the Wall Street analyst stressed.