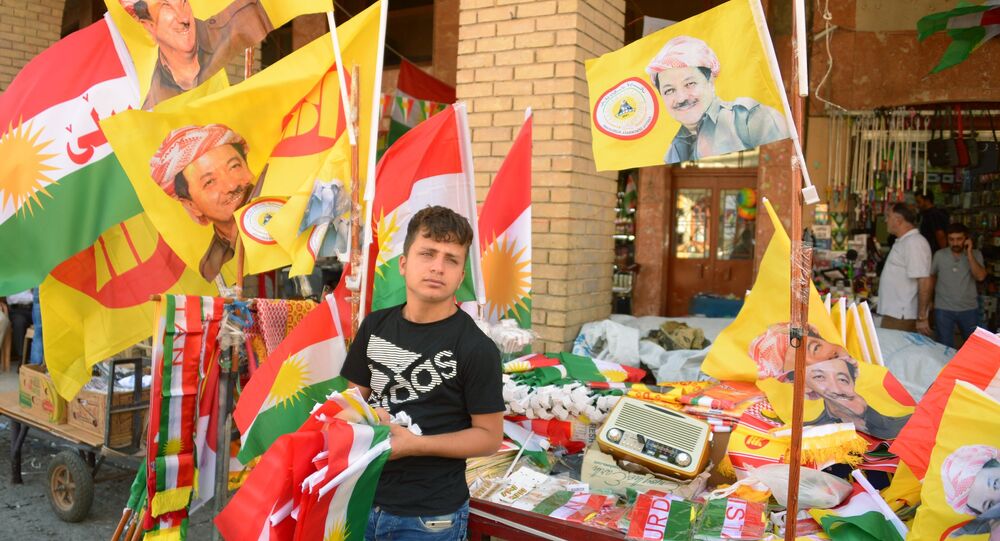 Iraqi Kurdistan's pursuit of independence has dealt a blow to the region's economic stability, Turkish political analyst Bora Bayraktar told Sputnik, revealing that while Ankara, Tehran and Baghdad are seeking to maintain Iraq's territorial integrity, the US, Israel and the Gulf States are interested in the creation of a Kurdish state.

The independence referendum has jeopardized the Kurdistan Regional Government (KRG)'s achievements earned over the last 15 years, claims Turkish journalist and political analyst Bora Bayraktar, explaining that the US and Israel play "good cop, bad cop" over the Iraqi Kurds' pursuit of sovereignty.

"If you recollect the US' actions in the region since the 1990s, it will become clear that they supported the idea of creating a Kurdish state," Bayraktar told Sputnik Turkey. "This could also be concluded from the fact that the US provided assistance to the [Syrian Kurdish] Democratic Union Party (PYD)."

Given this, the Trump administration's notion that the US "strongly opposes" the KGR's referendum on independence can be regarded as a tactical ploy, the analyst believes.

On September 20, the US State Department called upon Erbil "to accept the alternative, which is a serious and sustained dialogue with the central [Iraqi] government, facilitated by the United States and United Nations, and other partners" and stressed that "virtually the entire international community" also opposed the independence vote planned for September 25.

However, according to Bayraktar, Washington protested against the referendum "in words only," in order to avoid discontent among regional players, most notably Turkey.

"In reality, if you look not at words, but at actions, it becomes clear that it was the US who was behind the idea to hold a referendum in the [Iraqi Kurdistan]. In my opinion, this is an important part of [Washington's] strategic plan in the region," the analyst suggested.

© AP Photo / Ariel Schalit
How Independent Kurdistan Will Allow Israel to Kill Two Birds With One Stone
He believes that currently the US is playing a double game by criticizing the Iraqi Kurds' initiative and at the same time tacitly endorsing it. Washington is not the only power that supports Kurdistan's independence, the analyst added, referring to the Persian Gulf monarchies and Israel.

Israel has repeatedly signaled that it endorses the Iraqi Kurds' aspirations.

In mid-August Israeli Prime Minister Benjamin Netanyahu expressed a "positive attitude" toward a Kurdish state, calling the nation one of "brave, pro-Western people who share our [Israeli] values," The Jerusalem Post reported citing sources familiar with the matter.

In September Netanyahu reiterated his support for Iraqi Kurdistan's incentive to gain sovereignty. His statement came just weeks before the referendum in the Kurdistan Autonomous Region in Iraq.

According to Bayraktar, the US, Saudi Arabia and Israel are opposing Iran and Turkey on the Kurdish independence issue.

However, it appears that Ankara has taken a different view. Commenting on Tel Aviv's endorsement of Iraqi Kurdistan's vote, Turkish President Recep Tayyip Erdogan stated Tuesday that Israel would not be able to help the region should neighboring states introduce an economic blockade.

"As soon as lorries stop going to northern Iraq, there will be nothing to eat there. How will Israel supply anything there? Please, it can try," Erdogan remarked.

Given Baghdad, Turkey and Iran's opposition to the Kurdish secessionism, the KRG risks finding itself in an awkward position, Bayraktar noted.

© Sputnik / Sputnik, Dmitry Vinogradov
Clamping Oil Artery: How Turkey May Checkmate Iraqi Kurdistan in One Move
On Monday Turkish Prime Minister Binali Yildirim dropped a hint about possibly terminating oil transit from Iraqi Kurdistan to Turkey. The crux of the matter is that the oil pipeline running from the region to the Turkish port city of Ceyhan is Erbil's main route for crude trade with its partners. If Ankara closes this valve, the Iraqi Kurdistan's oil industry will be crippled.

But, it seems that sanctions are not Turkey's only option.

The Turkish parliament has recently extended a mandate authorizing the deployment of Turkish troops in Iraq and Syria.

In a similar move, the Iraqi parliament has provided a "mandate" to Prime Minister Haider Abadi to deploy troops in Iraqi Kurdistan's disputed province of Kirkuk on Wednesday.

Yet another strong signal to Erbil was sent by Iran, Iraq and Turkey's military drills conducted by the powers in close proximity to Iraqi Kurdistan's borders.

Furthermore, on Wednesday the Iraqi Civil Aviation Authority (IraqCAA) signaled that all international flights to and from Erbil and Sulaymaniyah airports will be suspended starting on Friday.

While trying to bolster his political image and obtain new bargaining chips in negotiations with Baghdad, Masoud Barzani, the KRG head, has instead shot himself in the foot, creating the preconditions for instability and insecurity in the region, the Turkish analyst stressed.

"By holding [the independence] referendum, Barzani has lost the opportunity for recognizing its legitimacy both inside the region and outside — from Turkey, Iran and Baghdad," Bayraktar remarked, highlighting that the three countries "ensure the very existence" of the Kurdistan Region.

© Sputnik / Alexei Druzhinin
Erdogan: Israel Won't Help Iraqi Kurdistan in Case of Economic Blockade
Barzani's policies have endangered Erbil's economic cooperation with Ankara, the KRG's major trade partner. It has become clear that Turkey is likely to impose sanctions on Iraqi Kurdistan following the referendum, according to the analyst.

On September 25, the independence vote took place in Iraq's autonomous region of Kurdistan as well as in the disputed areas de jure controlled by Baghdad but under de facto control of Kurdish authorities.

According to the Kurdish broadcaster Rudaw, 91.83 percent of voters in Iraqi Kurdistan supported the idea of independence, based on the 3.4 million ballots counted by Tuesday. According to the official results announced Wednesday, the Iraqi Kurds voted "yes" to the creation of an independent state.

Iraqi authorities said that the referendum was not legitimate and stressed that they would not conduct talks with the authorities of Iraqi Kurdistan on the issue of the vote. The Kurds, who account for about 20 percent of the Iraqi population, have been seeking self-governance for decades. In 2005, Iraq's Constitution recognized Kurdistan as an autonomous region run by the Kurdistan Regional Government.