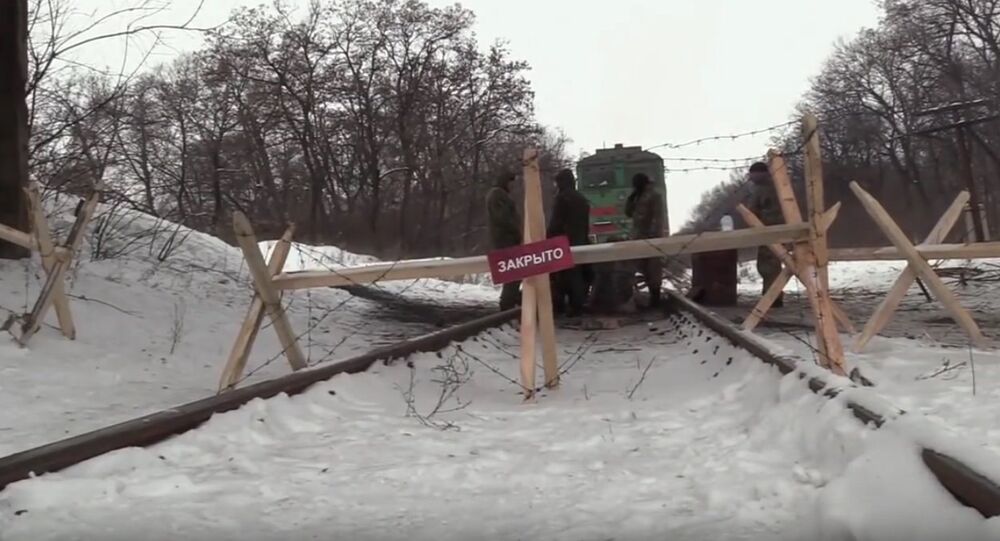 By the third anniversary of the coup in Kiev, it has become all the more evident that the “color revolution” virus did something worse than ousting Ukraine’s elected president and ensanguining Donbass. The virus spawned a reality where the left hand doesn’t know what the right one is doing, and the energy blockade is another symptom of it.

Jack Scherr — On February 15, Ukraine’s cabinet convened an extraordinary meeting and introduced a state of emergency in the country's energy sector due to the blockade of coal supplies from Donbass. Prime Minister Volodymyr Groysman warned that the energy crisis could lead to rolling blackouts and bring the country’s metallurgical industry to a halt. “We can’t call it by any other name than the erosion of the economy,” he warned. Home Minister Arsen Avakov said that in 16 days, plants in the cities of Mariupol and Kryvyi Rih would stop working.

#Ukraine'ian MP organizes blockade of railroads to #Donbass.
UkrRailWay reports over 1.5$m loss per 10 days.
No more coal-trains to Ukraine.

​This is the exact point where discrepancies come to light, as the government actually has to wrestle with itself. It is crucial to emphasize that the so-called Ukrainian volunteer fighters who declared a trade and economic blockade of breakaway parts in late December 2016 are reportedly controlled by Home Minister Avakov.  They include some lawmakers, such as Verkhovna Rada member Semen Semenchenko, the founder of the Donbass volunteer battalion, who has been reasonably accused of atrocities.

A day after the introduction of the state of emergency, President Petro Poroshenko condemned the blockade; however, no real action has been taken to resolve the problem.

The energy blockade has already yielded dismal results: the Industrial Union of Donbass Corporation (Ukraine’s largest metallurgical company) has stopped producing cast iron, steel, furnace coke, and rolled steel in LPR-controlled Alchevsk, and ceased generating electricity for the town.  The corporation said its metallurgical plant in the Dnepropetrovsk Region will stop working in the near future because it cannot function without coke from Alchevsk.

“In February 2017 the situation reached rock bottom, and our city-forming plants in Alchevsk just stopped… The unique industrial complex, unparalleled in Europe, simply froze,” the corporation explained in a statement, as quoted by Vestifinance.ru.

OSCE noted that the closure of the plant in the Dnepr Region and the coke plant in Alchevsk will leave 10,000 people without a job, and the same development at the Ynakiyevo metallurgical plant could suspend the employment of some 15,000 workers.

The CEO of Zaporizhstal, Ukraine’s fourth-largest steelmaker, said that if the blockade is not lifted now, the energy sector and heavy industry will collapse in two or three weeks. The blockade of coal deliveries will stop the work of power plants, which will trigger rolling blackouts and ultimately undermine the whole economy. The industrial slump will further devalue the hryvnia, Ukraine’s currency, said economist Andrei Blinov.

The blockade has also brought to a halt two major metallurgical plants in the breakaway parts of Donbass, which belong to Ukraine’s wealthiest man, oligarch Rinat Akhmetov. This has fueled speculations about a business war between him and Poroshenko.

In other words, the Ukrainian government enjoys creating trouble but has been dramatically bad at troubleshooting.

Let’s review some examples of its twisted logic.

1. The coal case: Kiev wants to cut off all economic relations with Donetsk and Lugansk to weaken them – Kiev finds itself short of coal – Kiev seeks coal supplies elsewhere – shipping coal from the United States, Australia and South Africa seems rather unfeasible – only Russia remains a plausible option, but not in ideological terms.

2. The civil war case: Kiev says it wants to bring Donbass back and considers people in the breakaway regions Ukrainian citizens – but uses weapons of mass destruction against Donbass civilians and has stopped paying them salaries and pensions; it withdraws institutions, and does not provide humanitarian aid. Kiev accuses Moscow of interference – but balks angrily at the fact that Russia has sent 60 aid convoys to the region and started recognizing local documents for humanitarian reasons. That is, Moscow started to provide for the local population, something that should have been done by Kiev.

3. The gas case: Ukraine switched to gas deliveries from the European Union and is obliged to pay higher prices than it would pay to Russia if it had accepted Gazprom’s offer. The Ukrainian government said EU gas cost Kiev $230 for 1,000 cubic meters in December whereas Gazprom offered the same amount of gas for $186, according to Expert.ru.

4. The human rights case: President Petro Poroshenko says Ukraine is striving to enter the European Union and celebrate human rights. At the same time, the government kills civilians and stifles millions with an economic blockade. Kiev ostensibly denounces totalitarian regimes, while allowing Nazi marches which would be illegal in most of Europe. It overtly builds a cult of personality around partisans that engaged in acts of terror against Poland and aided Hitler's Wehrmacht, which is incompatible with Europe’s official stance on World War II.

5. The Maidan case: the supporters of the Ukrainian authorities call the coup in February 2014 “a revolution of dignity.” Instead, the population was plunged into a spiral of impoverishment, and 58.3 percent of citizens sank below the poverty threshold in 2016, according to Ukraine’s Institution of demography and social studies, as cited by Expres.ua (the figure stood at 28.6 percent in 2015). According to data from Ukraine’s state statistics service and open sources, provided by AiF, the average salary in the country dropped from $409 in 2013 to $185 in 2017; pensions fell from $183 to $71. Over the same period, the price for meat soared 30%, the price of gasoline rose 240%, and the price of potatoes and bread jumped 300%. The price of housing and public utilities exploded, growing 450%.

Moreover, despite praising human rights, Ukraine has curtailed freedom of the press: prominent opposition journalist and author Oles Buzina was killed in April 2014, and the investigation has yielded no results so far. Amnesty International said Kiev has repeatedly muzzled its opposition media. The website Mirotvorets publishes the personal data of “dissidents,” and they often become targets (Oles Buzina was also on that website).

The Donbass conflict erupted in April 2014 as a local counter-reaction to the Western-sponsored Maidan coup in Kiev that had toppled President Viktor Yanukovych in February. Residents of the Donetsk and Lugansk regions held independence referendums and the regions proclaimed themselves independent republics. Kiev has since been conducting a military operation, and encountering stiff local resistance.

© AFP 2021 / GENYA SAVILOV
Why Ukraine's Military Can't Kill Donbass Civilians With Impunity Forever
It hasn't done so using shells and bullets alone. In summer 2014, Kiev stopped paying pensions, salaries and wages to the residents of the Donbass republics. In November 2014, Poroshenko signed the Ukrainian Security Council's decision to withdraw state-sponsored institutions from the regions and halt the ability of banks to operate there.

Donetsk and Lugansk residents branded it as genocide and an economic blockade, choking the local population including retirees and children.

In spring 2015, the governments of the Donetsk and Lugansk People's Republics started paying pensions, salaries and wages on their own, taking on social obligations.