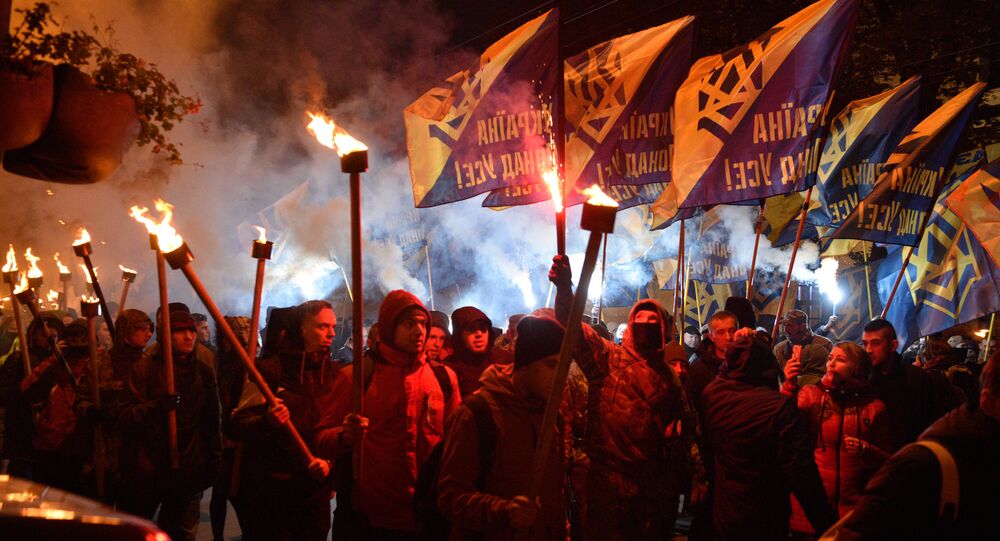 On Friday, several thousand Ukrainian ultranationalists descended onto the streets of Kiev to mark Ukrainian Insurgent Army (UPA) day, dedicated to the 74th anniversary of the founding of the WWII-era Nazi collaborationist organization.

Ukrainian media reported that up to 5,000 radicals from organizations including the Azov Regiment, the Organization of Ukrainian Nationalists (OUN), Right Sector and the Svoboda Party gathered to celebrate the holiday, which coincides with the Day of Ukrainian Cossacks and Defender of Ukraine Day, the latter holiday invented in 2014 to replace the 'Defender of the Fatherland Day', celebrated in most post-Soviet countries on February 23.

The Nazi-collaborationist Ukrainian Insurgent Army was formed in the autumn of 1942, and fought against the Red Army during and after its offensive to liberate Soviet Ukraine from Nazi occupation. During the war, the UPA, the OUN and other nationalist groups attempted to form an ethnically 'pure' Ukrainian state, ethnically cleansing tens of thousands of Poles, and helping Nazi forces to murder Jews, Gypsies, Soviet POWs, and Ukrainian anti-fascists.

© Photo : YouTube/Historia
Kiev Furious Over Polish Film Documenting WWII Ukrainian Nationalists' Crimes
In 2015, in spite of the fact that over six million Ukrainians fought in the ranks of the Red Army, compared to the estimated 100,000 who fought for the UPA, the government granted the guerrilla movement the status of 'fighters for Ukrainian independence', and named its founder Stepan Bandera a 'hero of Ukraine'.

The Azov Regiment, a volunteer fighting force formed after the February 2014 Maidan coup that has since been incorporated into Ukraine's National Guard, has been repeatedly accused of neo-Nazi sympathies. It and other ultranationalist volunteer battalions have been accused of committing war crimes against the civilian population in eastern Ukraine.

Since 2014, Russia has repeatedly accused post-Maidan Kiev of collaborating with, coopting and using radical nationalists for political and military purposes, including in the civil war in east Ukraine. Unfortunately, many Western governments supporting Ukraine have attempted to downplay these forces' role, or to ignore them altogether.

Protesters Clash With Police After Attacking Russian Consulate in Odessa